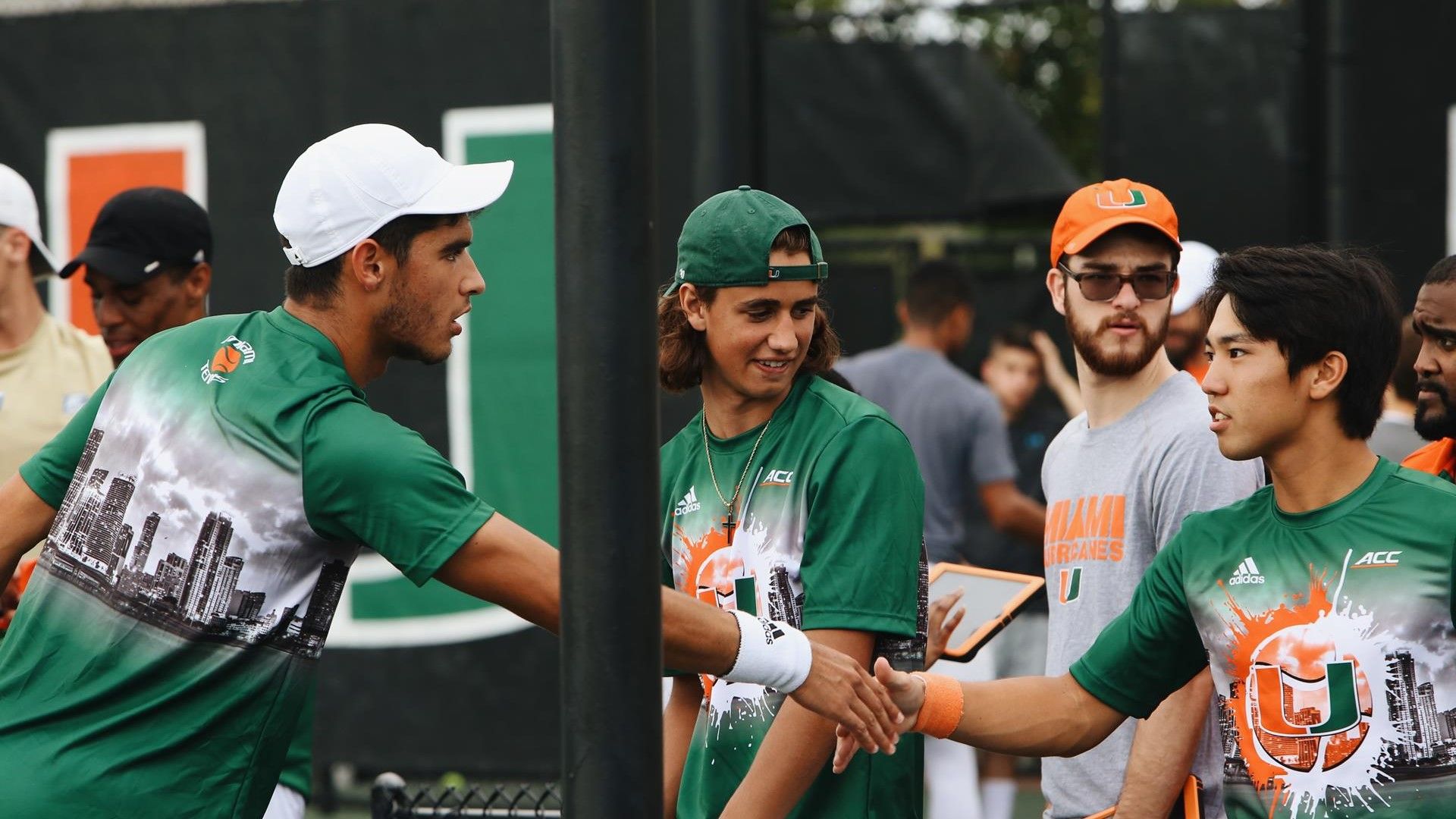 Singles victories from a trio of freshmen helped the Hurricanes (10-7, 1-4) handle the resilient Jaguars (11-8, 0-0 Sun Belt) despite falling behind in several doubles and singles positions. With the victory, No. 46 Miami improved to 9-1 in Coral Gables this spring.

“Any win is a good win at this time of the year,” Miami head coach Aljosa Piric said. “South Alabama is a tough team, they competed really hard and pushed us and challenged us at several spots. Our guys just played a little bit better in the critical times of those matches.”

Freshman Tatsuki Shimamoto recorded his first doubles-singles sweep of his career, fighting down Di Loreto in straight sets, 7-6 (7-3), 6-2, at the bottom of the lineup to clinch the match. The Nagoya, Japan, native ended a three-match skid with his second match-clinching victory of the season to improve to 5-8 in singles play.

Miami took the lead after winning a combined of last nine games on two courts. First, the freshman tandem of Pablo Aycart and Tatsuki Shimamoto won six games in a row to overcome a 2-0 deficit for a 6-2 triumph over Santiago Di Loreto and Maxime Lapraille at the No. 3 position. The duo earned its second victory in three matches together.

Redshirt sophomore Dane Dunlap and freshman Bojan Jankulovski then clinched the point by winning three straight games against Sacha Modica and Olivier Gingras in the middle of the lineup, 6-4.

Jankulovski, who played in the decisive match against NC State last time out, was first to get off the court in singles action, defeating Lucas Gonzalez, 6-3, 6-2, for his team-leading 13th win.

Soriano continued his stellar freshman season in singles play, notching a 7-6 (8-6), 7-5 victory against Cloes at the top of the lineup. The defeat was first for Cloes in the spring after 16 straight victories, while Soriano’s fifth straight win improved his record to 12-2.

When play was halted, Dunlap was playing his fourth straight three-set match after he and Modica had split the opening two, 6-3, 3-6, 1-1. Senior Niclas Genovese was a set to the good against Olivier Gingras at the No. 5 position, leading 7-6 (7-4), 1-5.

“We are going to take this win and make some corrections tomorrow in practice,” Piric said. “Our guys are going to get a lot of rest and we are going to have to come back and do this again Sunday against Louisville. We will have to play better and our guys know that and they will. We are going to be ready to compete and play against a tough Louisville team.”

The ranked ACC matchup against the 38th-ranked Cardinals is scheduled for noon at the Neil Schiff Tennis Center.