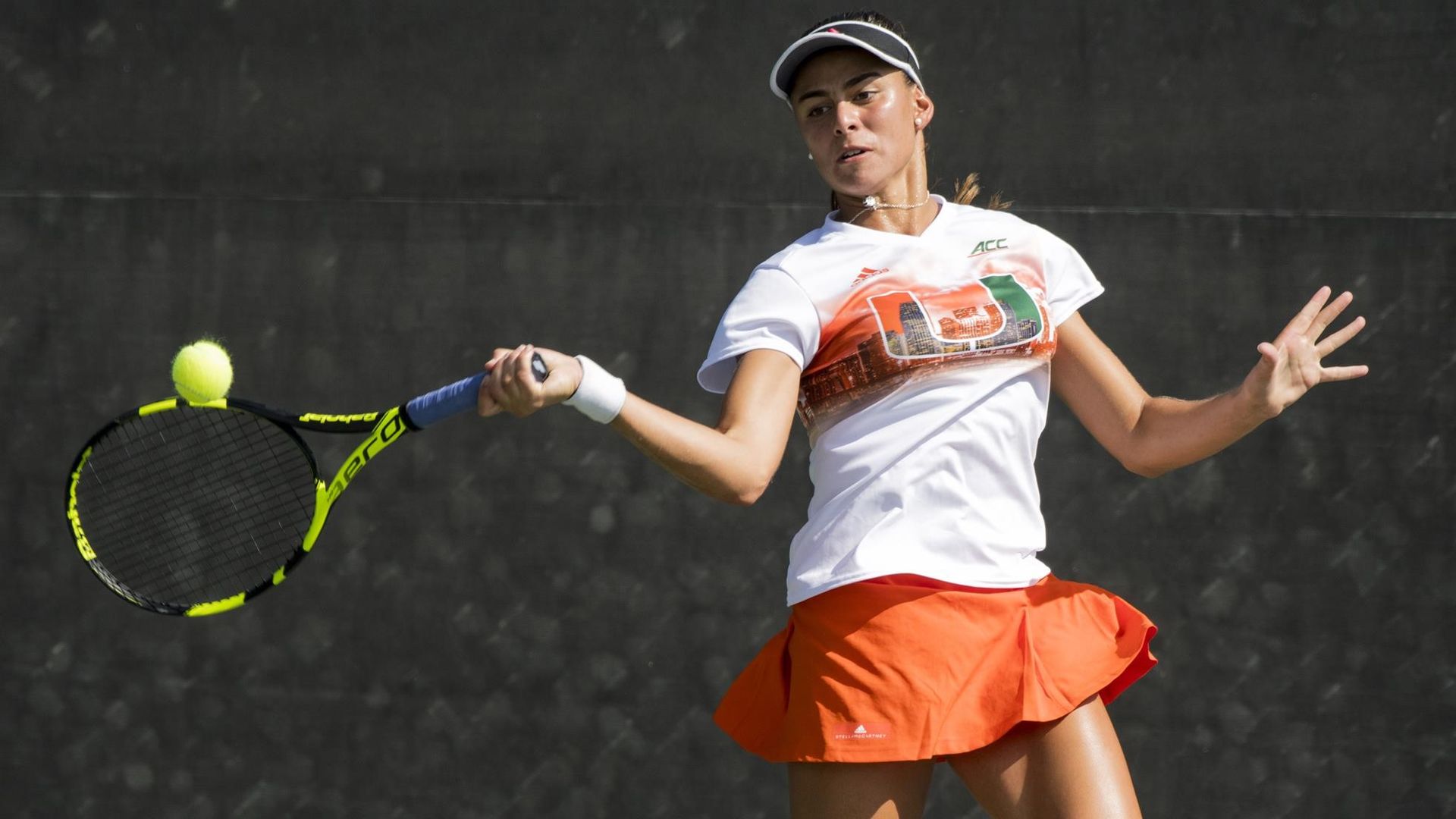 ORLANDO, Fla. – The University of Miami women’s tennis team recorded its fifth consecutive win Friday night, defeating No. 16 Florida State, 5-2, in front of a crowd of 412 people in second match of the day at the USTA National Campus.

Four of the six singles matches went to three sets and No. 42 Miami (7-3, 3-0 ACC) picked up its first top-20 win of the season, defeating its in-state conference foe for the third straight time.

“I liked our poise. If it came down to tennis, we felt pretty confident, but we know that they’re a feisty team,” Miami head coach Paige Yaroshuk-Tews said. “We know that they’re on a high right now. They’re having a great season and they’ve added two kids at the top of their lineup who are providing a lot of energy. So, it was just kind of [a question of] how we were going to respond to those things. That’s what we talked about. We were able to put those things aside.”

Sophomore Dominika Paterova and freshman Ulyana Shirokova got Miami on the board first in doubles with a 6-4 victory against Ariana Rahmanparast and Carla Touly, who staved off three match points across two games.

After trailing both 2-4 and 4-5, sophomore Estela Perez-Somarriba and freshman Sofia Sewing held a 6-5 edge on No. 53 Andrea Garcia and Petra Hule when action stopped.

Moments later, the Seminoles cut their deficit right back to one, as Garcia registered a 6-1, 6-2 victory against Paterova.

In the first singles match of her career, Sewing needed only 20 minutes to tally an unblemished first-set win. After dropping the second set, she won the first five games of the finale to post a 6-0, 4-6, 6-1 victory and give the Hurricanes a 3-1 edge.

“For her to come out and play three sets [coming off an injury, it shows] this kid is tough,” Yaroshuk-Tews said. “She has ice in her veins. She just played so well there when she needed to.”

Needing to win one of three other matches in a third set, Miami got the clinching triumph from Madcur, who rallied after dropping the opening set in seven games. She controlled the final two sets and locked up the victory on her second match point, posting a 1-6, 6-1, 6-3 win over Das.

“If you look at the scoreboard, it looked like she got smoked [in the first set], but if you were out there and you were riding the waves, you were able to see that she actually didn’t,” Yaroshuk-Tews said. “There were like four deuce games and she lost all four. Her level of tennis today in doubles took a change for the better and she was able to carry that through into singles. For her to be the one to clinch this match is just so big for our program, especially after she suffered a tough loss with the match on the line at Baylor. That was Ana Madcur out there tonight; that was Miami tennis.”

The remaining matches were both played out, with Shirokova’s contest against Rahmanparast ending first. Shirokova moved to 10-1 in her opening spring campaign with a 6-2, 3-6, 7-5 victory, taking the final two games after Rahmanparast fought off a pair of overall match points at 5-4.

With the victory, the Hurricanes moved to 35-6 all-time against Florida State, including 12-2 since 2009. Miami has won each of the past six meetings in regular season action and its senior class of Lohan and Silvia Fuentes improved to 5-1 versus the Seminoles.

For Florida State, which owns a 4-1 win over reigning national champion Florida, all three of its other losses this season have come to teams currently ranked top-six in the nation.

“I felt like we were just so calm and poised, thinking at a high level,” Yaroshuk-Tews said. “When you’re playing sets of tennis with no-ad scoring and things are going so fast, you have to keep a clear head. We were able to keep a clear head against a very feisty, aggressive team that was feeling very confident at the moment.”

Miami returns to action Wednesday at 3 p.m., when it squares off with fifth-ranked Georgia Tech in Atlanta.