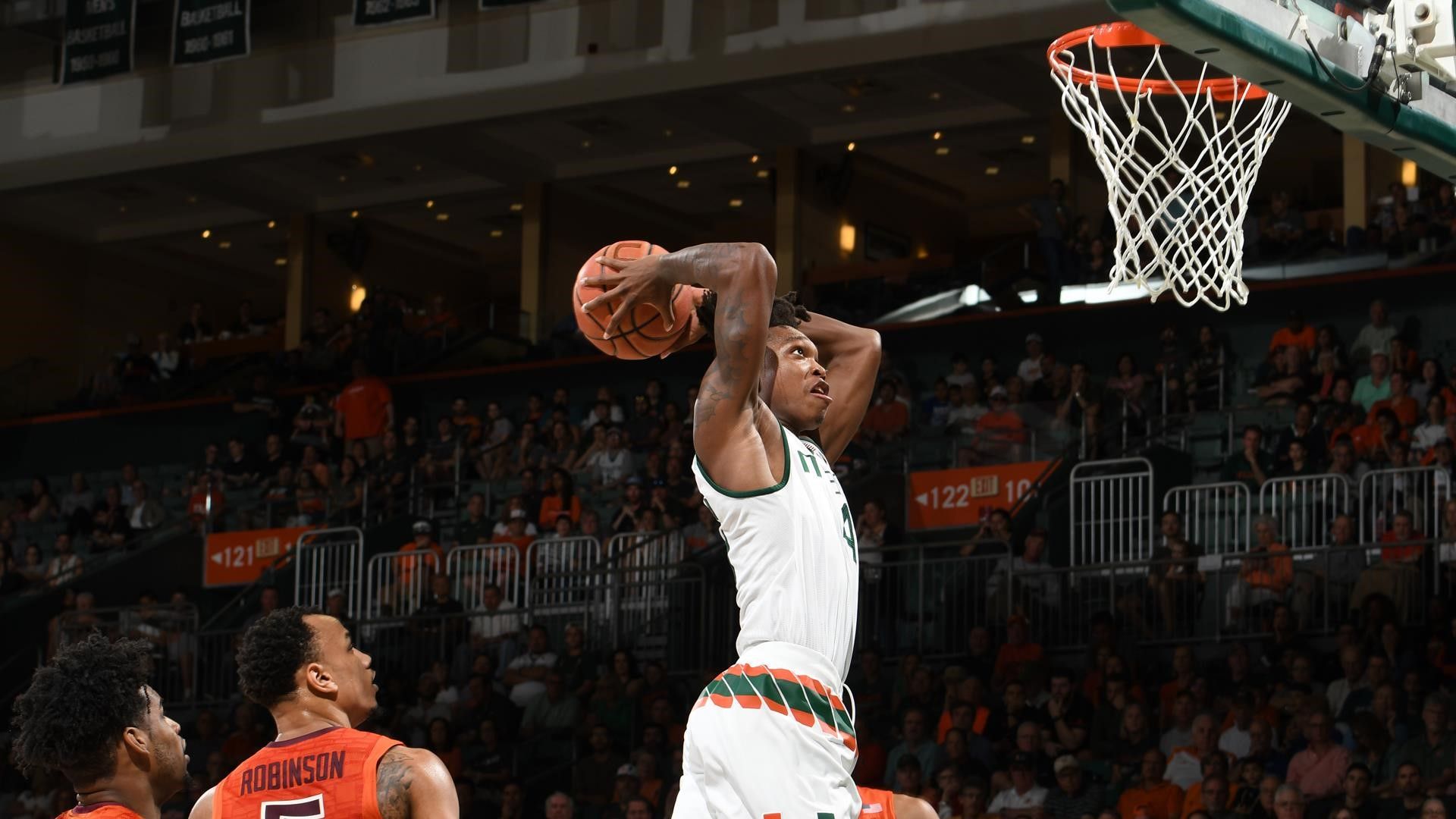 Miami overcame a 12-point first-half deficit and regrouped after going more than seven minutes without a basket down the stretch to squander a nine-point lead.

It was the Hurricanes’ biggest heart-stopper since Tuesday, when they won at No. 9 North Carolina on Ja’Quan Newton’s desperation buzzer-beater.

The Hurricanes (22-8, 11-7 Atlantic Coast Conference) take a four-game winning streak into the league tournament next week. The Hokies (21-10, 10-8) finished with the same league record for the third consecutive year.

Tech trailed 64-55 with eight minutes to go, but clamped down defensively and rallied to lead 68-66. Lonnie Walker IV ended Miami’s drought by sinking a game-tying basket with 55 seconds left.

After Tech missed two shots, Lykes drove, drew a foul from Justin Robinson and made one of two free throws. A shot by Tech’s Chris Clarke from midcourt missed badly at the buzzer.

The Hurricanes struggled early against the zone, as they have for much of the season. But they hit three consecutive 3-pointers to start the second half, and scored 12 points in a row for a 47-42 lead.

Back to back 3-pointers by Vasiljevic made it 64-55, but the Hurricanes didn’t sink another basket until the final minute.

Miami shot 59 percent in the second half and 48 percent for the game.

BIG PICTURE
Miami improved to 7-3 without star guard Bruce Brown Jr., who will be sidelined for at least another week with a foot injury.

Tech fell to 2-8 at Miami under coach Buzz Williams.

SENIOR DAY
For the Hurricanes’ home finale, seniors Chris Stowell and Mike Robinson made their first career starts and departed with Miami leading 1-0.

UP NEXT
Both teams play in the ACC Tournament next week in New York.

POSTGAME COACHES’ QUOTES
Head Coach Jim Larrañaga
On the game:
“I told the team they’re like the Cardiac Kids: they somehow are enjoying being on the edge at the end of these games. I’ve coached for 46 years and can never remember four consecutive games ending on the final possession and winning all four. The guys did a tremendous job. A lot of credit goes to Virginia Tech for the way they played in the first half. They were very good. I thought our team really responded at halftime and came out and played great all second half. Dejan Vasiljevic nailed some threes, Lonnie Walker IV hit a three, Chris Lykes hit a three and of course he made the big free throw at the end.”

On the offense when DJ Vasiljevic heats up:
“There are a lot of guys who deserve credit for that. Number one, Sam Waardenburg was the one setting the screens for him. Number two, Chris Lykes was the one getting the pass to him right at the right time in rhythm and the other guys were keeping their men busy so there wasn’t any help [from Virginia Tech]. Really a terrific job and DJ ended up with 16 points. Chris Lykes got seven assists and probably four of them were right to DJ.”

On the team’s personality:
“A lot of the credit I would give to Ja’Quan Newton. When you’re the only scholarship senior, there’s a lot of pressure on you to lead the team and then the team goes through a three-game losing streak and it’s very easy for others to doubt you. And for whatever reason, I saw Ja’Quan Newton heading into Notre Dame and that was the happiest I had seen him all year. You think he’d be miserable. I think his personality, excitement and positive attitude at that moment in time lent itself to our guys following that example.

“We played very spiritedly. We had a lot of guys cheering for each other and Ebuka Izundu made the shots on missed shots, he rebounded offensively and scored the buckets to win the game and everybody on the team was so thrilled for him. “

“Then we go to North Carolina and all of the guys tackled Ja’Quan Newton at the end of the game and you could see in the locker room the excitement, not just about winning, but about winning three games in a row like that and now it’s four games in a row like that. It’s really fun for a coach to watch your team lift its spirits right at a crucial time of the year. We don’t know who we’ll play or when we’ll play but we’re 11-7 (in the ACC) and we’ve put ourselves in good position for the ACC Tournament and for an NCAA bid.”

Virginia Tech Head Coach Buzz Williams
On the last call – did you think your guy did anything wrong there:
“The ACC assigns those officials and supposedly you get fined if you’re negative about them. So I’m not going to say anything. But I appreciate you trying to set me up.”

On the tale of two halves:
“I thought how they started in the second half was the difference in the game. They started 5-of-5 and we called a time out. I think it was a 13-3 run, we were 1 for 7, they were 5 for 5 at the time out. The first shot they missed was away from where I stand on the other side of the floor. They drove it and we came in from across to help, which was good. I don’t know if it would be deemed a block. Probably not, we only had two, but It was a deflection that went their ball out of bounds and then I thought from that point, it was a different game from that moment in time. How they started (in the second half) was too much in the end for us to absorb.”

On Lonnie Walker’s game-tying shot and Chris Lykes’ go-ahead free throw:
“They have really good players. If you look at the last five games, those two guys have led them in field goal attempts. I believe they won three, lost three, won three coming into today’s game. 4 and 2 (Walker and Lykes), I thought were really important. I thought they were really impactful on the last five games.”

On heading into ACC tournament:
“Glad we played early and glad we get to go home before bedtime. I’m thankful we get tomorrow off. I don’t exactly know what our schedule will be on Monday. I think it will be good for us to have a day off. I’m assuming we will know who we are potentially playing (in the tournament) before we go to bed.”

On league tournament:
“I haven’t been in the league long enough to have any equity to say anything about the ACC tournament. Just thankful to be a part of it, but in the four years that I have been in the league that’s 72 games, I would say the last 18, the margin has been thin in comparison to the previous three years. Not that the margin was ever wide to any extent but it’s a very thin margin and we’re thankful to be able to be a part of it.”