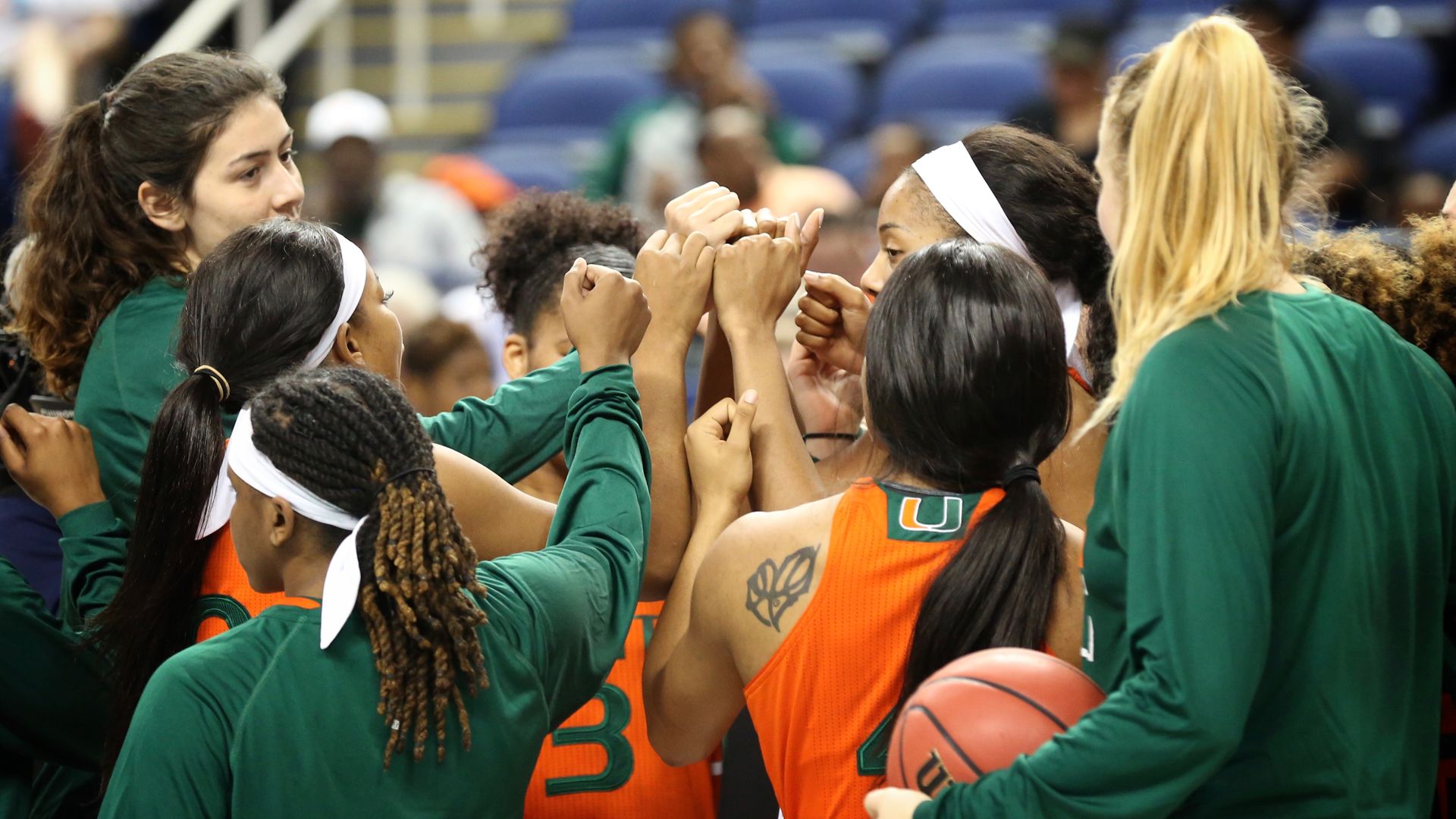 “You’re never happy after a loss, but I thought I saw another level to my team tonight and I’ve been kind of waiting on that,” Miami head coach Katie Meier said. “I think we’ve been playing very smart basketball. Everybody has their role and everybody does whatever’s needed, but this is the first game—in that last five minutes—where I saw us play like we won’t be denied. I needed to see that before we ended the postseason because something was just a little bit missing—a desperation of sorts—but I loved it. I loved the guts. I loved the effort. I loved the fight.”

The Hurricanes scored the first eight points of the game, six courtesy of Hof, a junior forward/center. Miami made four of its five shots in the opening three minutes, while the Seminoles missed all six of their attempts, but then countered with 10 straight points, en route to an 18-14 lead through one frame.

Redshirt senior guard Imani Wright tied for the third-most points before the break by a Miami opponent this season, notching 15 points on 6-of-9 shooting, including a 3-of-4 mark from long range. Hof paced the Hurricanes with 10 and helped Miami to a 20-14 edge in paint points.

Miami scored the first six points of the second half to even the score. The Seminoles went on a 10-0 run shortly thereafter to take a 51-40 advantage with 3:25 left in the period. Florida State went on to take an eight-point cushion, 55-47, into the fourth quarter.

However, Florida State, which led by 17 with 4:19 left and 14 with 2:20 to go, held on to register the narrow victory and advance to the ACC Tournament semifinals.

“There were a lot of high-level decisions they were making while they were desperate. Sometimes you’re desperate and stupid, but we were desperate and smart,” Meier said of the comeback bid. “It was high-level, the reads. When we got a steal, they knew exactly what to do. There wasn’t one second of hesitation. Unfortunately, we had to get down 17, but . . . we do have to play with that type of defensive effort to be a team that can win a couple in the postseason.”

Hof’s fourth-career 20-point outing and third of the season came on 9-of-16 shooting. Freshman guard Mykea Gray, who had back-to-back steals and layups in the final minute, recorded 15 points in a career-high-tying 35 minutes.

Senior forward/center Erykah Davenport finished with 10 points and a game-high 11 rebounds. It marked the 13th double-double of her career, including her 11th this season, eighth against an ACC team and fifth versus a ranked foe.

Wright finished with 20 points to pace the Seminoles, who also got 12 points from senior center Chatrice White, as well as 10 apiece from senior center Ama Degbeon and senior forward Shakayla Thomas. White (3-of-10) and Thomas (3-of-9) combined to shoot 6-of-19 from the field.

Miami held a 42-32 edge in paint points and a 22-12 advantage in points off turnovers. The Seminoles shot 85.7 percent (18-of-21) at the free throw line, good for the second-best mark by a Miami opponent this season, including the best of a team with double-digit attempts.

MIAMI HURRICANES POSTGAME NOTES
– The Hurricanes dropped to 14-44 in their all-time series with the Seminoles, which dates back to the 1974-75 season.
– Miami is now 9-14 in ACC Tournament play, including 6-4 since 2015, 1-2 as the sixth seed, 3-10 as the lower seed, 9-10 as a single-digit seed and 4-13 versus single-digit seeds.
– In eight games over three years, Hof, who tied for the third-most made field goals in an ACC Tournament game in program history, is averaging 11.9 points on 62.7 percent shooting (42-of-67) in ACC Tournament play.
– Davenport moved into the top five on Miami’s all-time participation list, tying Sylvia Bullock, Keyona Hayes and Adrienne Motley for third place with 129 games played.
– Hof eclipsed both 300 made field goals and 1,750 minutes played in her career, Gray surpassed 350 points as a Hurricane and freshman guard Kelsey Marshall moved past 50 made 3-pointers at Miami.