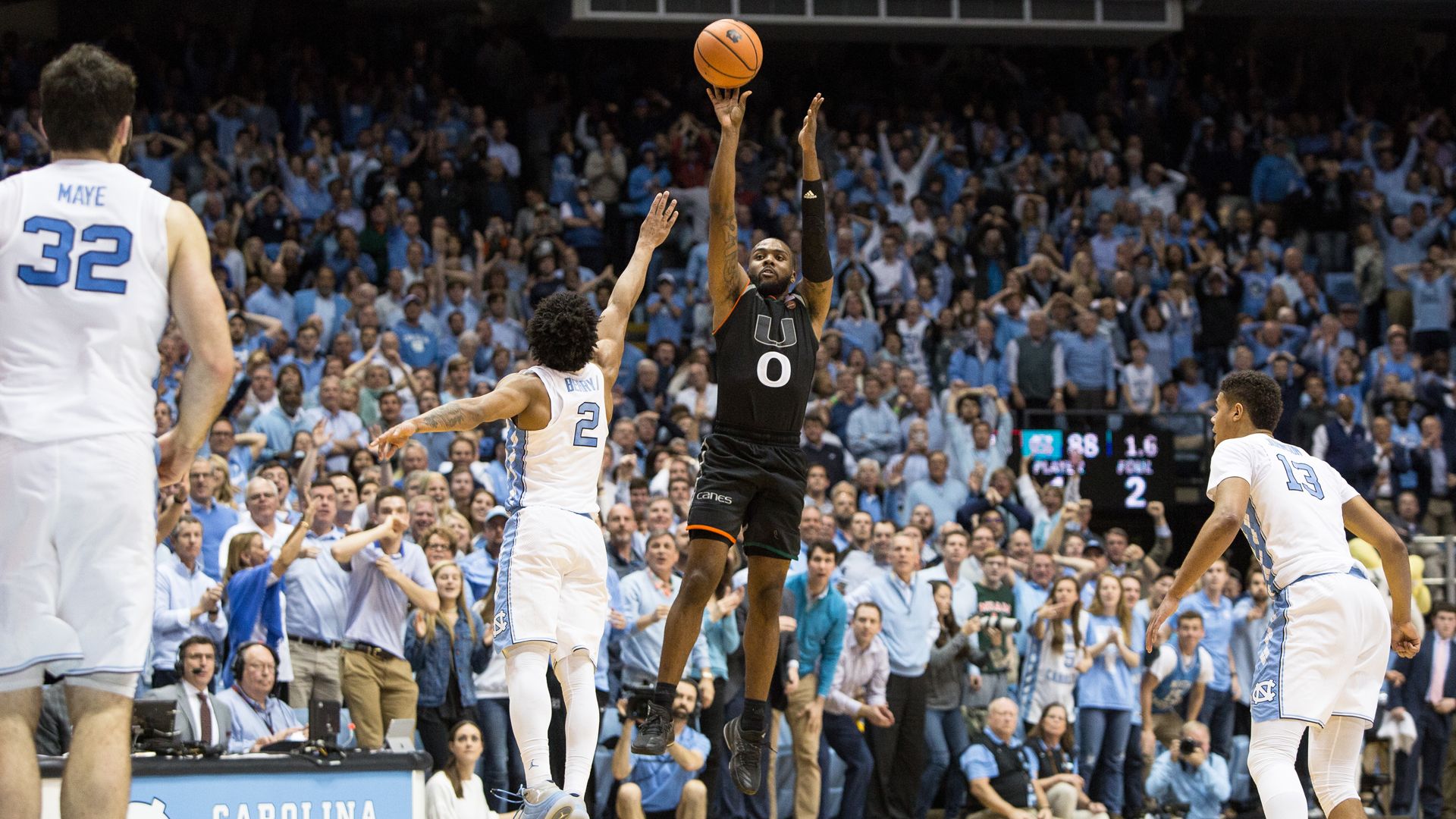 Newton's Buzzer-Beater Propels UM to Win at No. 9 UNC

Newton’s heave off his left foot came immediately after UNC’s Joel Berry II hit a tough 3 of his own to tie the game with 4.1 seconds left. Miami pushed the ball upcourt for Newton’s shot over Berry, then the Hurricanes immediately mobbed Newton near midcourt.

“When I was guarding Joel, he came down and hit a great shot,” Newton said. “Soon as he hit the shot, I came around and I wanted the ball. … I got it. I looked at the clock when I was dribbling upcourt and it said 3 seconds left.

Miami coach Jim Larranaga said he considered calling a timeout before the Hurricanes inbounded the ball. And as Larranaga gave his postgame comments, Newton stared at a nearby wall-mounted TV replaying his remarkable shot.

Larranaga said the final play ended up being simply: “Ja’Quan, score so we can win this game.”

It capped a game that saw Miami (21-8, 10-7 Atlantic Coast Conference) squander a 16-point second-half lead, only to come up with a huge win with the ACC Tournament just a week away.

Berry matched his career high with 31 points for the Tar Heels (22-8, 11-6), who lost their final home game to snap a six-game winning streak.

Game Notes
Team
• North Carolina leads the series, 21-8, but Miami has won six of the last nine meetings.
• Jim Larrañaga is now 6-5 in his Miami career against North Carolina.
• Miami’s 91 points tied its most in regulation in any road ACC game since UM joined the league for the 2004-05 season (91 at Virginia on Jan. 12, 2005).
• Miami has won 10 or more ACC games for the fifth time in Larrañaga’s seven years at UM.
• Miami recorded its second-most points this season (94 in OT at Florida State) and hit the 90-point barrier for the third time this year.
• Miami is 7-12 against top-10 opponents under Larrañaga, including 3-6 on the road. This is Miami’s first win on the road against a top-10 team since a 90-74 victory at then-No. 4 Duke on Jan. 13, 2015.
• Miami put six players scored in double figures for the second time this season (Florida A&M). UM put at least five in double figures for the seventh time this season and the second time in ACC play (Wake Forest, Feb. 7).
• Miami is now 12-1 under Jim Larrañaga when scoring at least 90 points.
• Miami hit 12-of-13 from the free-throw line and is 25-for-28 from the charity stripe in the last two games. Miami hit all 10 of its free-throw attempts in the second half.
• Miami scored on its first seven possessions of the second half.

Individual
• Chris Lykes scored 18 points, one off his career high, set against Virginia on Feb. 13. He reached double figures for the 11th time in 17 ACC games.
• Ja’Quan Newton played in his 124th career game, tied for eighth most in program history with Elton Tyler (1997-2000, 2001-02) and John Salmons (1998-2002).
• Newton scored Miami’s final seven points and finished with 15, one off his season high. Miami is 12-1 this season when Newton scores in double figures.
• Newton’s buzzer-beater was his fifth 3-pointer of the year (5-for-25).
• Newton now has 1,115 career points.
• Lonnie Walker IV scored 13 points, reaching double figures for the 10th time in his last 12 games.
• Ebuka Izundu scored 12 points, all in the first half. He scored in double figures for the fifth time this season.
• DJ Vasiljevic was 4-for-4 from the field, including 2-for-2 from 3-point range in scoring 10 points, his 11th game in double figures this year.
• Dewan Huell scored 14 points, his team-high 18th double-figure scoring game of the year. He added a team-high eight boards.
• Sam Waardenburg recorded a career-high four assists; it marked his first game where he has recorded more than one assist.