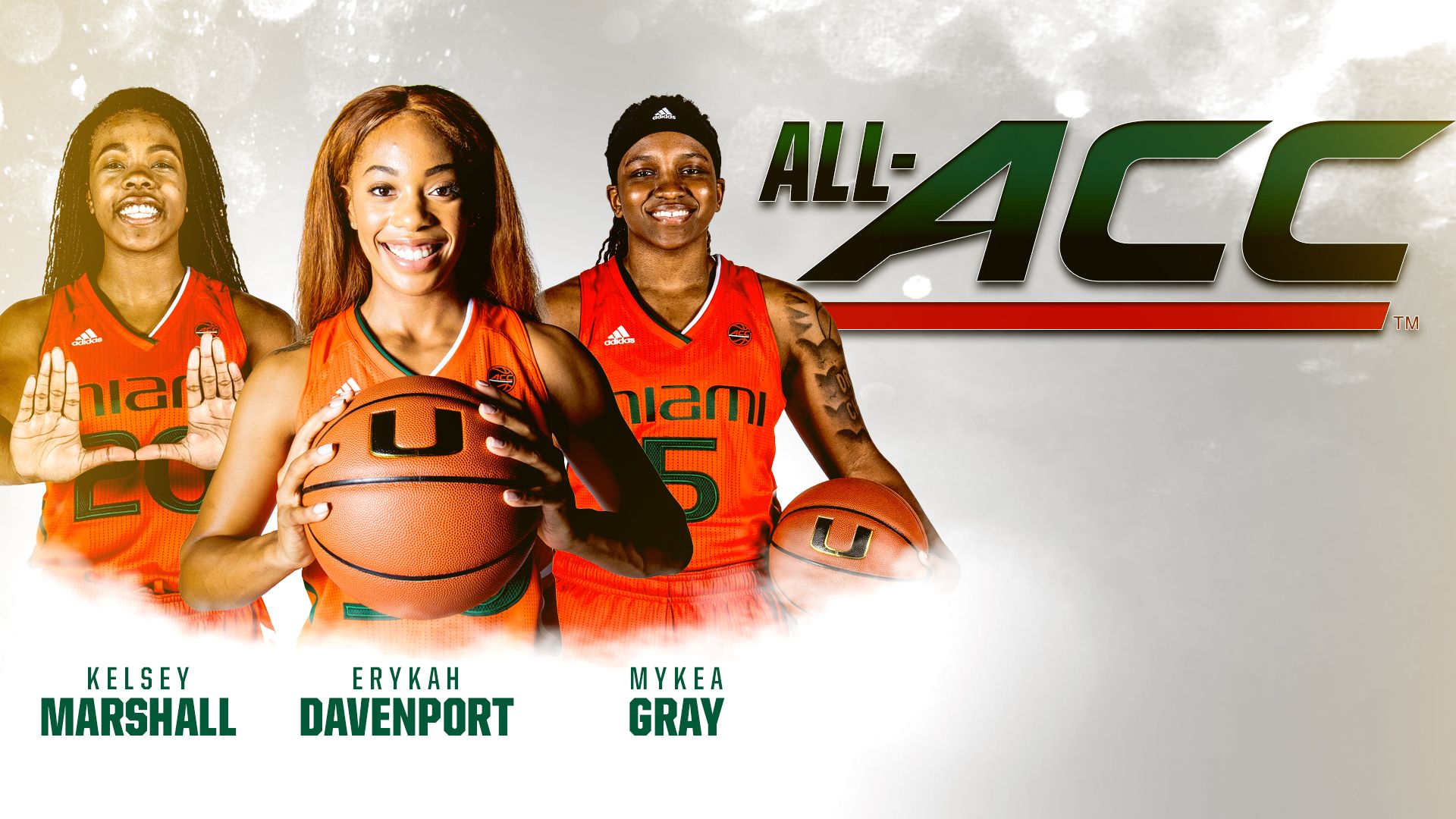 Mykea Gray picked up All-Freshman Team distinction from both outlets, while Kelsey Marshall received the recognition from the Blue Ribbon Panel.

This is the third time, and first since 2011-12, three Hurricanes earned ACC postseason honors and the first time in program history, regardless of conference affiliation, two Miami players made the league’s all-freshman team.

A 6-foot-2-inch forward/center, Davenport leads Miami in points (12.2) and rebounds (8.5) per game, as well as field goal percentage (53.6). The Decatur, Ga., native has 10 double-doubles, tied for fifth in the ACC. Her 11 outings with double-digit rebounds are tied for fourth and her seven 20-point games place her in a tie for No. 13.

“I’m so proud of Erykah. It’s a testament to her work ethic and humility,” Miami head coach Katie Meier said. “She improved her game each year and took advantage of the offseason workouts. Most importantly, she willed this team to victories with her tremendous leadership. I’m thrilled that she has been recognized.”

Davenport is fifth in the league in rebounding and sixth in field goal percentage, as well as second in offensive rebounding (3.5). Her 19 rebounds against New Orleans are tied for the most by an ACC player this season and place her in a tie for ninth on Miami’s single-game list.

Gray and Marshall are the first Miami players to make the ACC All-Freshman Team since Adrienne Motley in 2013-14. The only other such honoree in program history is Shenise Johnson, who was recognized in 2008-09.

“Our entire freshman class this year deserves to be recognized, but I’m excited that both Kelsey and Mykea earned the official accolades,” Meier said. “Mykea jumpstarted our season for us and is such a threatening player. Kelsey has really come on as of late and is putting in the work on all aspects of her game. The production and commitment of the freshman class has been the story of this season and we are very excited about the future for each one.”

Gray has scored in double figures 16 times in her rookie campaign and is one of just 25 players in the conference—just two are freshmen—to score 20-plus points at least four times.

Marshall totaled double-digit points 13 times, including nine times in ACC play, all within the final 13 games of the year. She shot 39.4 percent from 3-point range in conference action, seventh-best in the league.

Davenport, Gray, Marshall and the sixth-seeded Hurricanes open ACC Tournament play Thursday at 8 p.m., against either No. 11-seed Wake Forest or No. 14-seed Pittsburgh in Greensboro, N.C.