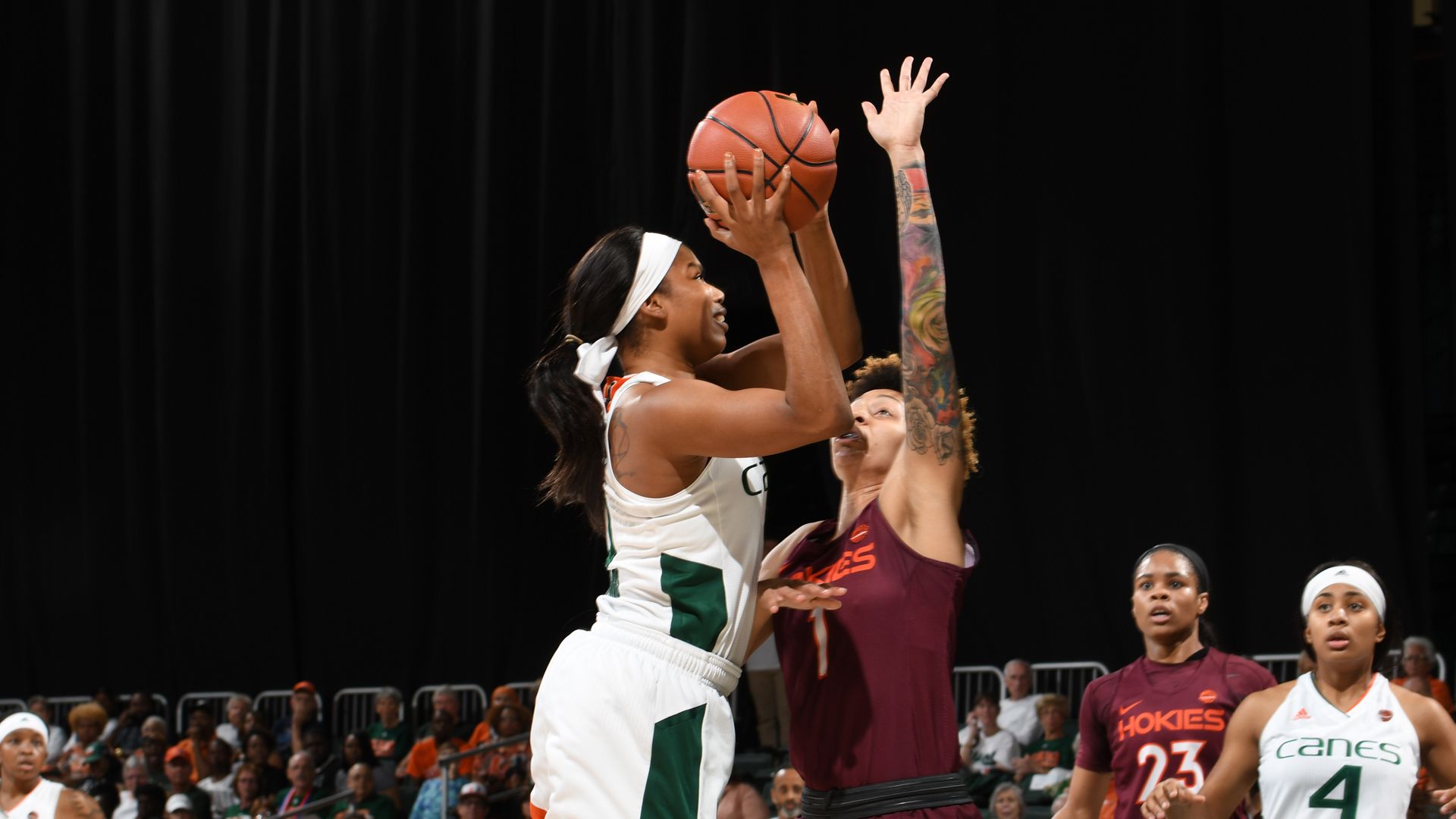 CORAL GABLES, Fla. – The University of Miami women’s basketball team concluded the 2017-18 season in style Sunday evening, posting a 76-46 triumph over Virginia Tech on senior day at the Watsco Center.

“She was phenomenal. Her defense and rebounding [worked from start to finish],” Miami head coach Katie Meier said of Marshall. “If she’s going to do that for us, she’s going to get mega minutes. She needed to do that, we’ve been begging her all year. She was one of our leading rebounders, which is really special, and she shared the ball. She made the right basketball plays. She’s always been a shot-maker, but she’s really complete now.”

Miami got 16 points from its bench in the first half, while Virginia Tech got just two. In addition, the Hurricanes held the Hokies to 28.6 percent shooting (8-of-28).

“I didn’t think we had great energy in the first 15 minutes of the game. I was very concerned,” Meier said. “I even asked Laura Cornelius, ‘what is up? What’s wrong with us?’ I think we were just had a little bit of too much emotion and we weren’t listening. We didn’t settle in. The end of that second quarter, I thought, was huge. I felt really confident going into halftime with that 8-0 run we put together.”

The Hurricanes ended the third session on a 14-6 run, capped by a buzzer-beating coast-to-coast layup by Marshall, to take their then-largest lead of the day, 52-33, into the last quarter.

Along with Marshall’s stellar outing that included a career-high six made field goals and zero turnovers, redshirt guard/forward Shaneese Bailey registered 13 points and a season-high three steals, while freshman guard Endia Banks added 12 points. Banks’ total was her second-highest in ACC play and she made multiple 3-pointers for the first time as collegian.

Redshirt junior guard Rachel Camp was the lone Hokie to notch double-digit points, ending the game with 13. Junior guard Taylor Emery, the ACC’s fifth-leading scorer entering the day at 18.0 points per game, had a season-low-tying seven points on 3-of-9 shooting.

Miami finished with a 36-6 edge in bench scoring, allowed zero fast-break points and doubled up Virginia Tech in paint points, 32-16. The Hurricanes, who trailed for just 49 seconds, also had a 23-3 lead in points off turnovers.

The Hokies’ 30.2 percent mark (16-of-53) from the field was the second-lowest by an ACC opponent against Miami this season.

“They had so many different journeys. Neydja’s journey coming from Auburn and Shaneese coming from FAU. Keke and Erykah being a part of the recruiting class that also had KP [Khaila Prather],” Meier said. “They are as special as they come . . . and they have been leaders. No one on our team would ever want to let these seniors down. They are that respected and I thought everybody really stepped up tonight.”

The Hurricanes will be the No. 6 seed in the ACC Tournament and have a first-round bye. They will face either No. 11-seed Wake Forest or No. 14-seed Pittsburgh Thursday at 8 p.m., on RSN in Greensboro, N.C.

MIAMI HURRICANES POSTGAME NOTES
– Miami moved to 20-6 all-time against Virginia Tech, upping its second-longest active winning streak against any opponent to 14 in a row and making the Hokies the fifth program the Hurricanes have at least 20 wins against.
– The Hurricanes have now totaled 20-plus victories for the eighth time in nine season, as well as 10-plus ACC wins for the sixth time in eight years.
– With six rebounds in the game, Davenport tied Hope Butler for No. 10 on Miami’s all-time rebounding list with 694 in her career.
– Meier moved to 8-5 in regular season finales, including 7-2 over the past nine years, and also upped her marks to the same numbers in regular season home finales.
– Marshall reached 50 free-throw attempts as a collegian, Banks eclipsed 750 minutes played at Miami and junior forward/center Emese Hof surpassed 450 rebounds in her career.