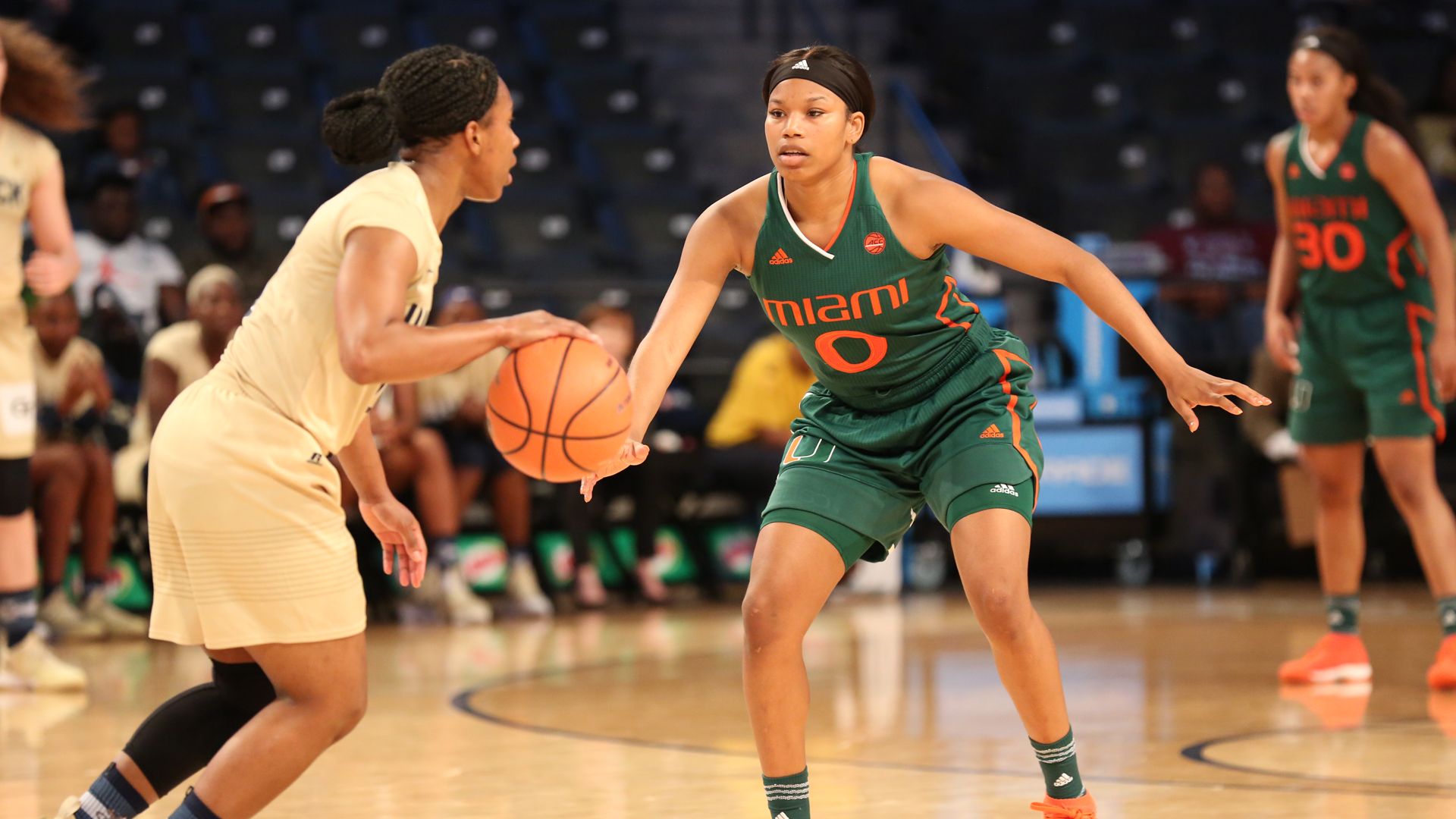 “They worked harder than us. They got every loose ball,” Miami head coach Katie Meier said of the Yellow Jackets. “They had a bunch of steals on our lazy passing and our lazy cuts. They earned it. You could tell from the jump that they were willing to do whatever it took to win the game and Miami wasn’t.”

Freshman guard Mykea Gray scored 10 points for Miami in the first quarter, but sophomore guard Francesca Pan notched 13 for the Yellow Jackets, who also went on a 9-0 run in the frame and led, 19-16, through 10 minutes.

Pan’s 17 points before the intermission tied for the second-most in a half by a Miami opponent this season.

Miami went on an 11-3 run to open the fourth session to cut the deficit to 12, 62-50, and held Georgia Tech scoreless for 4:20 during part of the stretch. However, the Hurricanes could not get any closer than a dozen.

Gray paced the Hurricanes with 18 points, her most in an ACC game this season and her highest total since posting the same amount Dec. 15, 2017 against Alabama State. She went 4-of-7 from 3-point range, tying for her most makes from beyond the arc in an outing.

Miami’s leading scorer on the season, senior forward/center Erykah Davenport, played just seven minutes in the first half due to foul trouble, picked up her third early in the second half and finished with seven points.

In a career-high 25 minutes, freshman guard Taylor Mason also had seven points, tying her high in ACC play, and grabbed a season-high seven rebounds to lead the Hurricanes and tie for the game high.

Pan led all scorers with 24 points, the fifth-most by a Hurricane opponent in 2017-18, while freshman forward Lorela Cubaj added 14 on 7-of-9 shooting for the Yellow Jackets on senior day.

The Hurricanes committed a season-high 33 turnovers and Georgia Tech had 16, leading to the Yellow Jackets attempting 27 more shots in the contest. Georgia Tech logged 21 steals, seven more than any prior Miami opponent this year.

Miami is set to conclude regular season action Sunday at 4 p.m., when it hosts Virginia Tech on senior day at the Watsco Center.

MIAMI HURRICANES POSTGAME NOTES
– The Hurricanes, who had won eight of the past 10 games in the series and each of the past four, dropped to 15-14 all-time versus Georgia Tech.
– Miami’s five-game road streaking was its longest since posting five in a row from Jan. 10 to Feb. 11, 2016.
– The Hurricanes’ 16 turnovers before the break tied their season high for the first half set against St. John’s Dec. 3, 2017, while their 17 after the intermission set a new season high for giveaways in either half.
– Thursday’s game was a homecoming for a trio of Hurricanes from the Atlanta area in Davenport (Decatur, Ga.), Mason (Decatur, Ga.) and freshman guard Endia Banks.
– Banks eclipsed 50 free-throw attempts at Miami and redshirt senior guard/forward Shaneese Bailey surpassed 250 made free throws as a collegian.