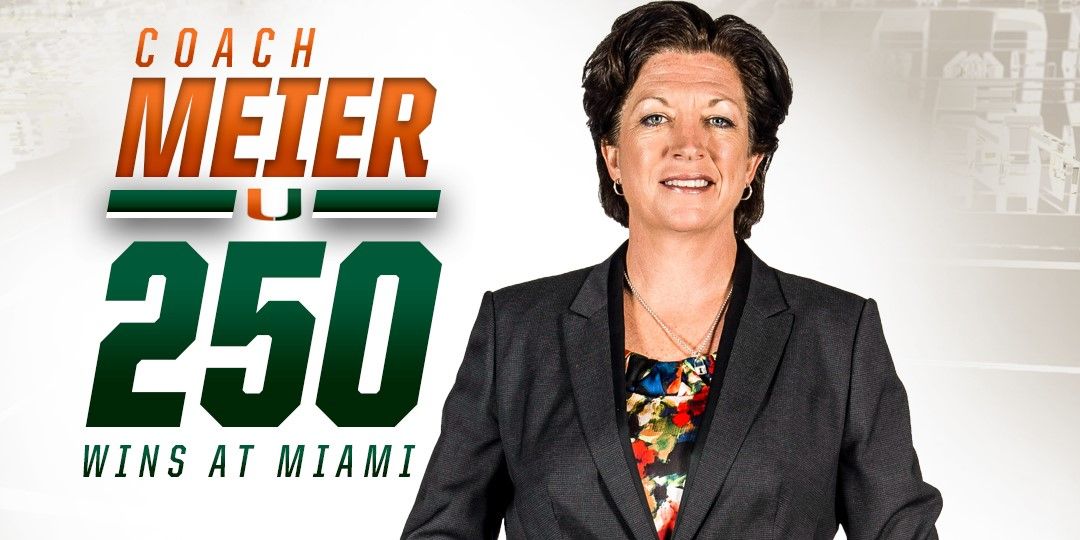 WBB Wins at UVA for Meier’s 250th Victory at Miami

Two Hurricanes—Erykah Davenport and Emese Hof—had double-doubles in an outing for the first time this season and Miami (19-8, 9-5 ACC) used an extended 37-10 first-half run at John Paul Jones Arena to log its fifth straight road victory.

“I was really shocked that it was a game of runs. I really am shocked that we had a 20-point lead in the first half,” Meier said. “I’m not shocked that we won, I just didn’t think that we’d be able to stretch [it like that]. They are so dangerous and talented. Their roster has so many scorers on it. I think my team is special in the fact that nobody is aware of their own stats. At any second of any game, I don’t believe anyone on my team has any idea if they’ve gotten enough shots or if they got enough plays called for them.”

The Hurricanes used an 11-1 run in the second period, scoring nine straight points to open the span, to push their advantage to 20, 39-19, with 3:47 to go before the intermission. The Cavaliers responded with a 14-2 run to close the half and make it 41-33 entering the locker room.

Miami committed just two turnovers in the opening 20 minutes, setting a new season low for giveaways in a half. Its top prior mark was three in the second half Dec. 28, 2017 versus Bethune-Cookman. All nine active Hurricanes scored in the first half, with eight making at least one field goal.

After a back-and-forth third frame, the Hurricanes went on a 7-0 run in the closing 53 seconds, capped with a buzzer-beating shot by Taylor Mason. The freshman guard’s runner gave Miami, which had three turnovers through 30 minutes, a 60-43 advantage entering the fourth quarter.

The Hurricanes scored the first five points of the final session to take their largest lead of the game, 65-43, with 8:36 on the clock. Virginia climbed within 10, but could not get any closer than that.

Davenport, a senior forward/center, finished with game highs in points (19) and rebounds (14). She narrowly missed her eighth 20-point performance of the year in what would have been her fifth in the past six games. The Decatur, Ga., native, who recorded her 10th double-double of 2017-18, was also one board shy of her third 15-point rebounding showing this year.

Hof, a junior forward/center, posted her third double-double of the season, finishing with 13 points and a season-high 12 rebounds, the latter setting a new career best in ACC play. Davenport and Hof, who combined for 17 offensive boards, became the first Miami players to log double-doubles in the same game since Keyona Hayes and Jassany Williams did so versus Morgan State on Dec. 28, 2013.

The Hurricanes played without redshirt senior guard/forward Shaneese Bailey, who has started 17 games this season, for the second game in a row.

“We were really conscious of [Erykah and Emese’s] minutes, because without Bailey in the rotation, it knocks us, it checks us down,” Meier said. “Serena-Lynn [Geldof] picked up really huge minutes for them and kept them rested. I think Serena’s minutes allowed those two to just dominate in the fourth when we needed them.”

Freshman guard Kelsey Marshall added 12 points, her eighth double-digit game in the last 11 outings. Mason shot 5-of-6 from the free-throw line, setting a career high in makes and tying her top mark in attempts, to finish with seven points, her most in ACC play.

Miami finished with a 15-3 edge in second-chance points and had a 49-38 advantage in rebounding. The Hurricanes tied a season low with eight turnovers and trailed for just 3:26 of action.

Meier, who improved to 250-160 (.610) in her time leading the Hurricanes, joins fellow UM Sports Hall of Fame member Ferne Labati as the only head coaches in program history to register 250 victories.

“This was as rewarding of a win, I told them in the locker room, [as we have had]. They gave me flowers and I gave them right back to them,” Meier said. “I said, ‘This is no way about me. It’s incredible what you guys are willing to do for each other.’ I’m proud to represent them, I take credit for that, but it’s all credit to my team. They are just a special group.”

The Hurricanes will play their final road game of the regular season Thursday at 7 p.m., against Georgia Tech in Atlanta on RSN.

MIAMI HURRICANES POSTGAME NOTES
– The Hurricanes moved to 9-9 all-time against Virginia, winning for the eighth time in the past 10 matchups to even the series for the first time since it was 1-1.
– Miami’s 20-1 run in the first period began with a four-point play by Mykea Gray and an old-fashioned three-point play by fellow freshman guard Endia Banks to tie the game at nine, while the final 13 points came after a Virginia free throw.
– The Hurricanes scored 37 of 47 points during a span of 13:28 in the first half, including posting 26 of 30 points in a stretch of 7:44.
– With Sunday’s victory, Miami clinched its sixth winning record in conference play in the last eight seasons and its third in a row.
– Davenport reached 125 games played as a Hurricane to tie for No. 10 on the program’s all-time list and surpassed 2,250 minutes played, Marshall eclipsed 500 minutes played at Miami, freshman guard Mykea Gray moved past 100 made field goals in her young career and freshman guard Endia Banks eclipsed 200 points as a collegian.