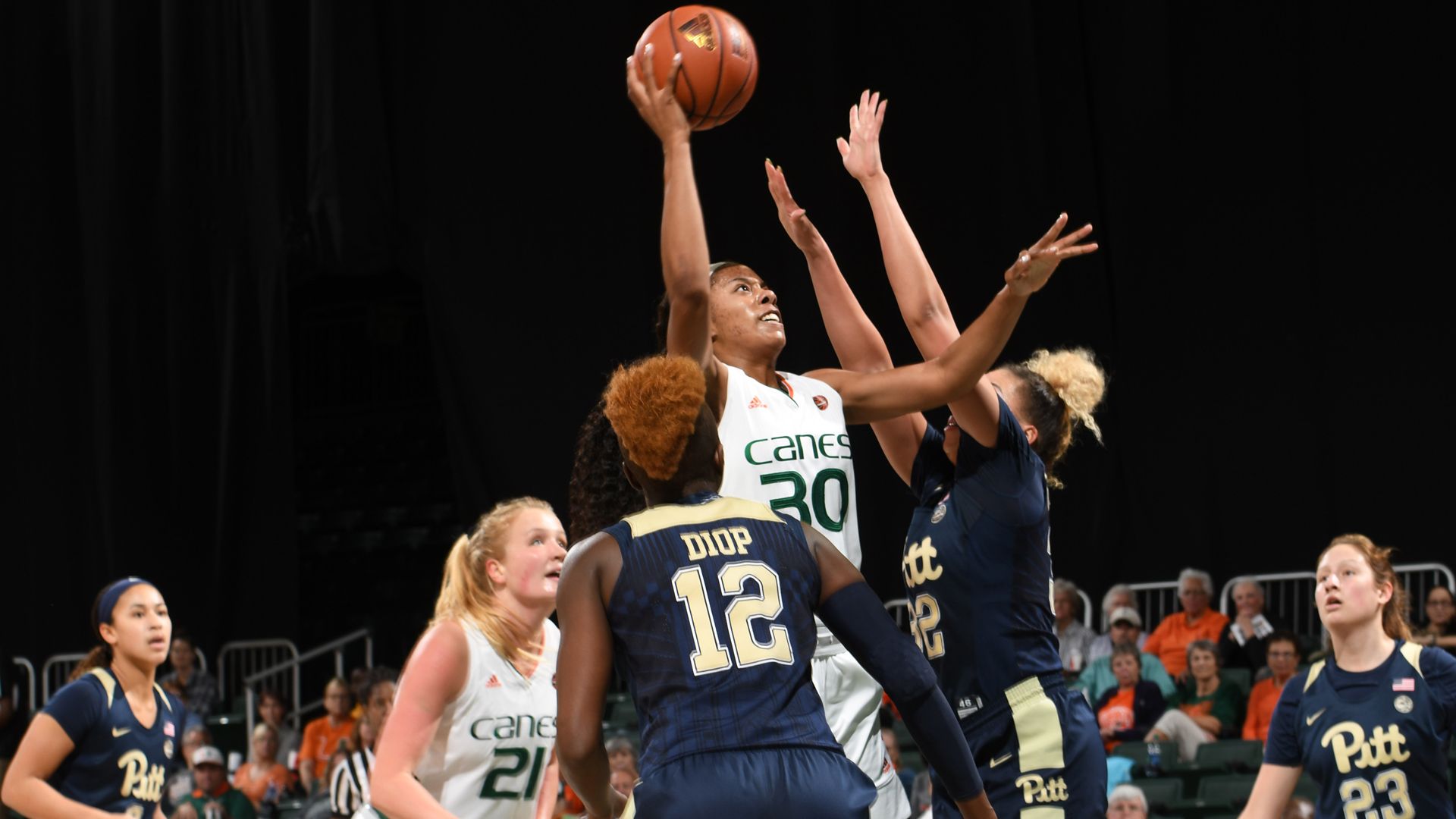 CORAL GABLES, Fla. – The University of Miami women’s basketball team registered its seven victory in its past nine outings Thursday night, posting a 82-58 triumph over Pittsburgh at the Watsco Center.

Behind a game-high 20 points on 10-of-12 shooting by senior forward/center Erykah Davenport, Miami (18-8, 8-5 ACC) led wire-to-wire for the sixth time this season, including the second in ACC action.

“We were clicking offensively, hitting shots. I thought [freshman guards] Endia [Banks] and Mykea [Gray] came out with a freshness to them,” Miami head coach Katie Meier said. “It was great, but at halftime we didn’t congratulate ourselves. I was talking about defense. I told them we had to shut Pitt down. ‘If they don’t score 60 they won’t beat us.’ So, that was all we talked about at halftime—defense. I felt the offense was pretty well executed.”

Despite 11 points from Pittsburgh (10-16, 2-11 ACC) sophomore guard Alayna Gribble in the opening frame, Miami held a 27-20 edge through 10 minutes, tying for its fifth-most points in a quarter this season.

The Hurricanes set a new season best with 16 assists in a half, as just four basket were unassisted. They had a season-best 62.5 percent (20-of-32) clip from the field in a half and tied their season high with 20 makes in a half.

The Hurricanes extended their lead to as many as 22 points in the third period and went on to take a 19-point advantage, 67-48, into the final period.

In the fourth quarter, Miami pushed its cushion up to 26, en route to notching its eighth 20-point victory of the campaign and its largest win in ACC play.

Davenport logged her seventh 20-point outing of the season, including her fourth in the last five games, and added a career-high four assists.

Gray finished with 17 points, her most in an ACC game, and shot 4-of-6 from 3-point range. She also tied for her most assists in ACC play with five and set new ACC highs for field goals (six) and 3-pointers made. Harris, in a career-high 35 minutes, tallied her third straight double-digit outing, finishing with 13 points to go along with a career-high seven assists to tie for the game lead.

“I think it was check-downs. We talked about good, better, best all week,” Meier said the balanced scoring attack. “We were confident offensively. We got it, we understand. We were kind of locked in, so then it was a matter of figuring out how to stop Pitt. That was our major concern, defense, [along with] rebounding.

Gribble paced the Panthers with 17 points, as Miami held her to six after the opening period, while fellow sophomore guard Jasmine Whitney added 14. The Hurricanes held redshirt junior Yacine Diop, the ACC’s No. 10 scorer entering the day, to seven points on 3-of-16 (18.8 percent) shooting.

Miami dominated the Panthers down low, posting a 44-16 edge in paint scoring and a 45-24 advantage in rebounding, including 18-8 on the offensive end. The Hurricanes had a 26-11 lead in assists, setting a new season high in the category, while posting 80-plus points for the sixth time on the year.

In addition, Miami finished 35-of-68 (51.5 percent) from the floor, making its second-most field goals of the campaign and finishing with its second-best field goal percentage.

After three straight home games, Miami now hits the road for a Sunday matchup with Virginia in Charlottesville, Va., at 12:30 p.m., on RSN.

MIAMI HURRICANES POSTGAME NOTES
– Miami improved to 21-9 all-time versus Pittsburgh, including 14-3 over the past 17 meetings, 9-1 in the last 10 and 5-1 since the Panthers joined the ACC.
– Redshirt senior guard/forward Shaneese Bailey did not play due to a lower extremity injury, snapping a streak of 17 straight starts and marking the first time in her 59 games as a Hurricane she has not taken the court.
– With the win Thursday, Miami clinched an eighth straight season finishing with at least a .500 mark in ACC play.
– The Hurricanes have now faced each of the 13 players who entered the day averaging at least 15.0 points per game—including meeting the two from Florida State twice—and held those players under their current season average on 11 of the 15 occasions.
– Gray surpassed 300 points as a collegian, Harris eclipsed both 450 points and 1,750 minutes played at Miami, Davenport reached 850 points in her career and sophomore guard/forward Sarah Mortensen reached 50 games played and moved past 500 minutes played as a Hurricane.