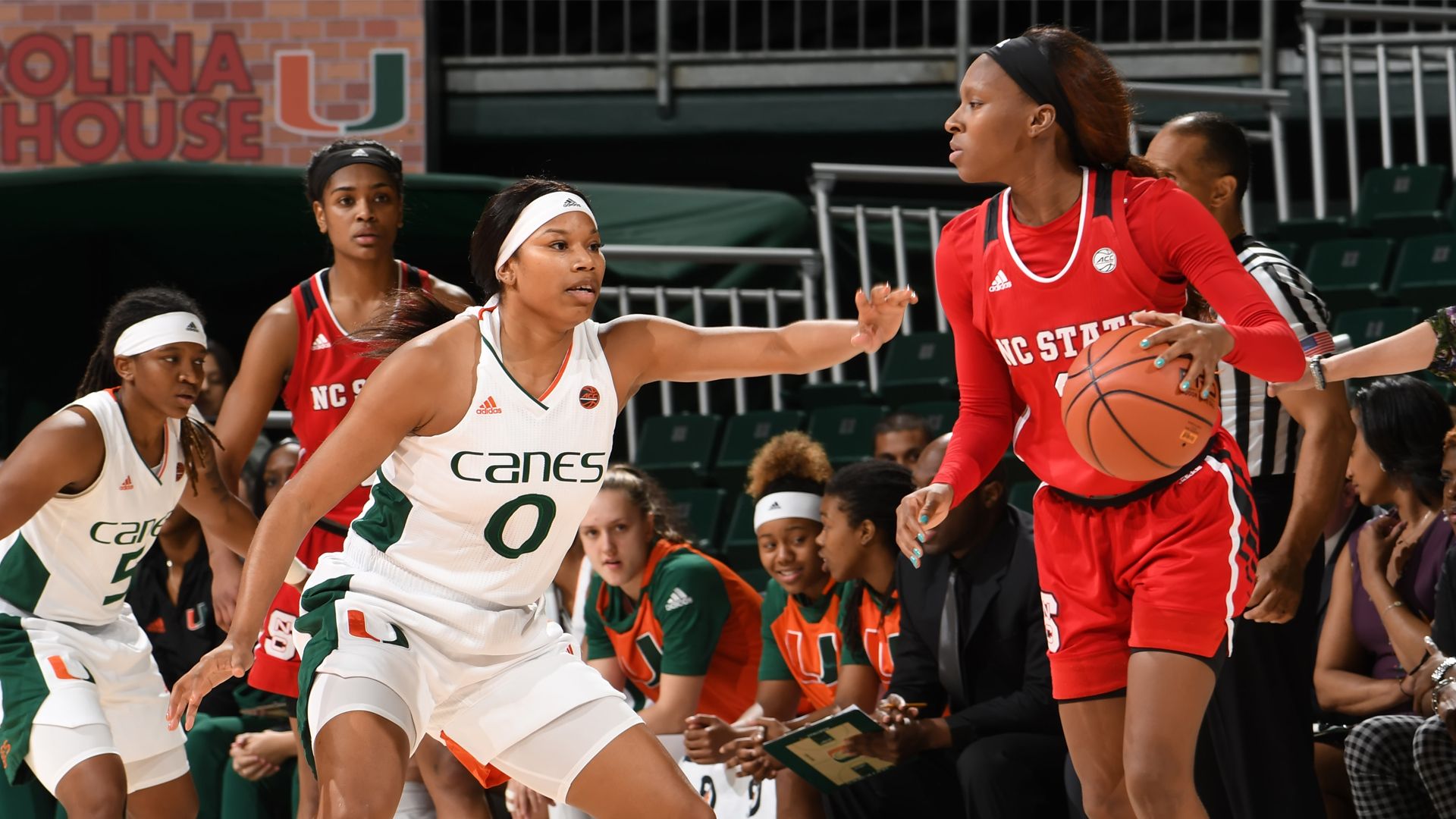 Behind a career-high-tying 17 points from senior forward Keyanna Harris that included the game-winning basket, Miami (17-7, 7-4 ACC) moved to 6-1 in its past seven games and recorded its third top-25 victory of the season.

“To hold a team like NC State to 48, that’s incredible,” Miami head coach Katie Meier said of the team’s defensive performance. It seems like that was what was needed [to get the win].”

After a low-scoring second period, the Hurricanes took a one-point advantage, 27-26, into the intermission. Despite scoring its co-seventh fewest points in a half this season, Miami’s staunch defense helped it trail for just 57 seconds before the break.

NC State opened the third session on an 8-0 run to take a 34-27 lead, but Miami quickly countered. The Hurricanes scored 11 of the final 15 points of the frame to even the score at 38 entering the last period.

Miami pushed its edge to five, 47-42, with 5:12 to remaining, but NC State responded with a 6-0 run to take a 48-47 advantage with 1:54 on the clock. Neither team scored again until the final 10 seconds when Harris converted on a layup in traffic through a foul following a key block by senior forward/center Erykah Davenport at the other end.

The Hurricanes got another stop and then hit three of four free throws in the closing four seconds to seal the win.

“We are okay. I think that we don’t worry about the outcome,” Meier said of the way Miami closed the game. “We just do what we are supposed to do on the next possession and things have been working out for us. Huge defensive plays.”

Along with Harris’ game-high 17 points, freshman guard Kelsey Marshall notched 14, tied for her second-most of the season. In addition, junior forward/center Emese Hof logged 13 points in a career-high-tying 33 minutes. She also had a game-high three blocks, becoming the eight becoming the eighth player in program history to reach 100 and moving into seventh place on the career leaderboard.

Freshman guard Mykea Gray had a career-high seven rebounds to co-lead the Hurricanes along with Harris, who also paced Miami with three steals.

“She wants to have a special senior year,” Meier said of Harris. “She’s just putting her thumb on this team and is really demanding [of her teammates].”

Three Wolfpack players tied for the team lead in scoring, as sophomore forward Erika Cassell, redshirt junior guard Kiara Leslie and senior forward Chelsea Nelson all had 11 points. Cassell logged a double-double, ending with a game-high 11 rebounds, eight of which came on the offensive end.

Miami doubled up NC State in paint points, 28-14, and led 31-13 in bench points. The Hurricanes also did not allow a single fast-break point. The Wolfpack finished with its second-lowest point total of the season, behind only the 47 it had against No. 3/4 Louisville, and tied for the fourth-fewest by a Miami opponent.

The Hurricanes, who picked up their 100th all-time victory in ACC play Thursday night, return to the court Sunday at 4 p.m., when they square off with No. 12/12 Florida State on ESPN2.

MIAMI HURRICANES POSTGAME NOTES
– Miami defeated NC State for the 10th time in the last 11 meetings to improve to 11-10 against the Wolfpack and take the lead in the all-time series for the first time.
– The Hurricanes have now won six of seven ACC games for the first time since winning 13 straight from Jan. 5, 2012 to Feb. 19, 2012.
– Hof, who now has 101 blocks, joined Sylvia Wilson (198), Kym Hope (164), Jassany Williams (133), Chanivia Broussard (132), Sylvia Bullock (120), Vicki Plowden (108) and Morgan Stroman (100) as Miami players to reach triple figures.
– Marshall logged her sixth double-digit performance in the past eight games after tallying just four in her first 15 outings of the season.
– Sophomore center Serena-Lynn Geldof reached 250 minutes played as a Hurricane.