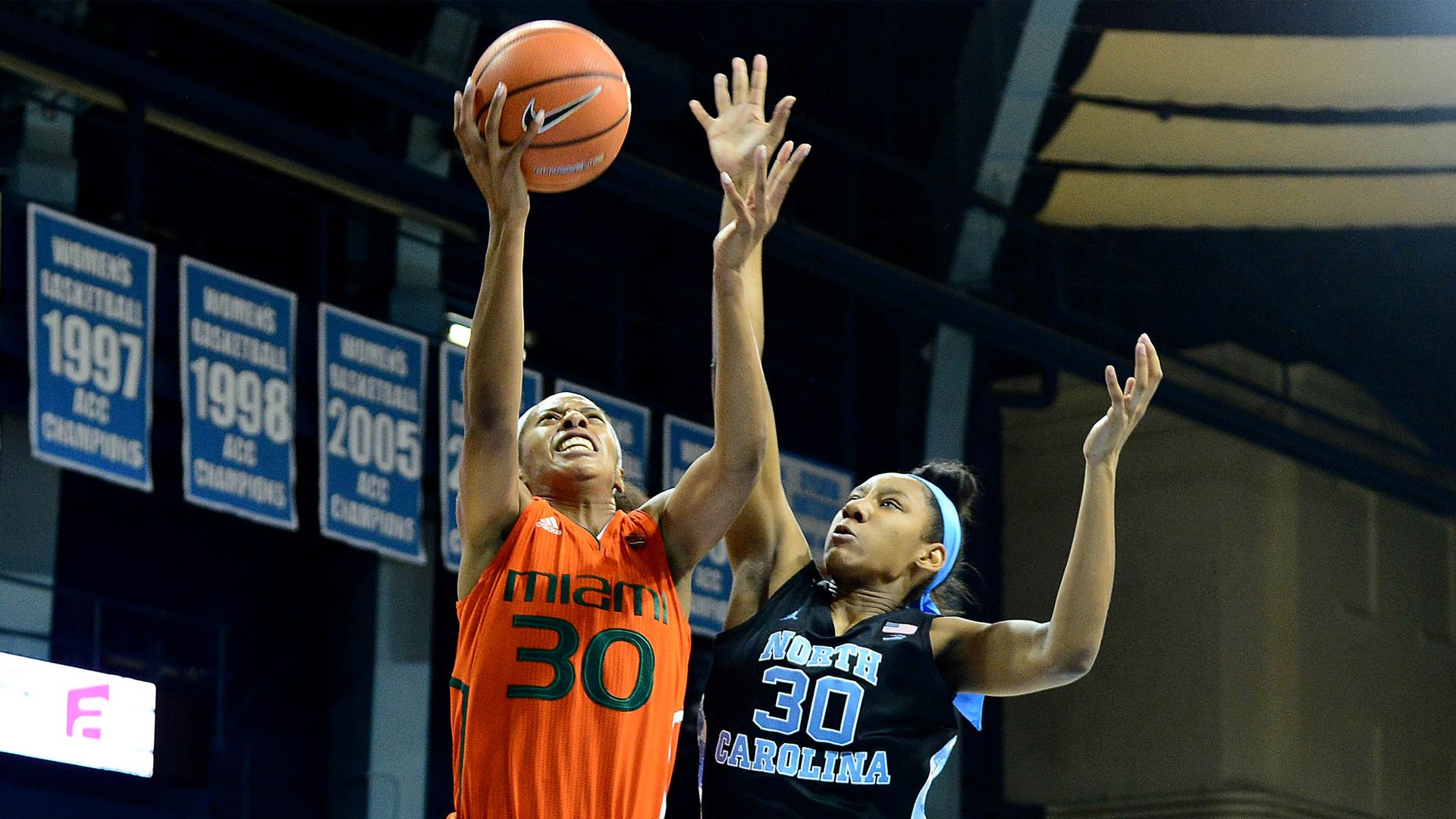 CHAPEL HILL, N.C. – The University of Miami women’s basketball team picked up its fifth victory in its past six outings Sunday afternoon, registering a 92-72 road win at North Carolina.

Miami (16-7, 6-4 ACC) has now won three straight games over the Tar Heels for the first time and registered three consecutive triumphs at Carmichael Arena, where it previously had just one win.

Senior forward/center Erykah Davenport logged her 10th-career double-double, including her eighth this season, finishing with a team-best 20 points and game-best 11 rebounds for the Hurricanes, who set a season high in points and trailed for only 26 seconds.

“I thought we played with a real pace in the beginning and so did they. I was wondering if it would continue like that or if it would come down to execution,” Miami head coach Katie Meier said. “I think the real story of the game was the third quarter. I said at halftime that we had 24 points in the paint and it wasn’t really from our post players, it was layups. I said, ‘Let’s establish the bigs when they are in together.'”

Freshman guard Mykea Gray scored nine points in the first five minutes to help the Hurricanes take a 23-19 lead on North Carolina (14-9, 4-6 ACC) through one quarter.

Miami connected on back-to-back 3-pointers to open the second frame, quickly stretching its edge to 10. The Tar Heels trimmed the deficit to two, but the Hurricanes answered by pushing their advantage back to 10 and their lead sat at nine, 45-36, entering the locker room.

North Carolina redshirt junior guard Paris Kea scored 19 points in the opening 20 minutes, the most in a half by a Miami opponent this season, as she shot 6-of-7 from the field, 3-of-3 from 3-point range and 4-of-5 at the line. The rest of the Tar Heels were 6-of-23 from the floor, including 0-of-9 beyond the arc.

The Hurricanes pulled away late in the third session, closing the period on a 13-2 run in the final 2:42, including scoring the last 10 points of the quarter, to grab a 73-52 lead. Miami made its last five shots of the frame, with three makes coming from 3-point range by three different players.

Miami led by as many as 26 points in the fourth period and North Carolina was unable to get any closer than 16, as the Hurricanes finished with their seventh 20-point triumph of the season and second-largest win over the Tar Heels.

Davenport, who turned in her fifth 20-point game of the season and her second in a row, was one of five Hurricanes to tally double-digit points.  Gray placed second on the team with 14, tying her top mark in ACC play.

“That was a very unselfish team performance. That was one of our best assist-to-turnover ratio of the year,” Meier said. “It was something that we really prepped in the game plan and it depended on Carolina’s lineups, who our mismatches were and I thought we found them well. We communicated well and we had a sense of purpose today on the offensive end.”

Kea, who finished with 31 points, became the first Miami opponent with 30-plus since Georgia Tech’s Ty Marshall registered 37 on Feb. 24, 2013. Freshman center Janelle Bailey had 14 points and senior guard Jamie Cherry logged 12, but the Hurricanes held her to 2-of-11 shooting.

Miami had a 31-5 edge in bench scoring and did not allow a bench point until the final four minutes of the game. The Hurricanes, who have five wins in their past six games, also had a 48-26 edge in paint points to go along with a 45-31 advantage in rebounding.

“We needed a huge offensive effort because Carolina is very good,” Meier said. “They are a great offensive team and their ability to score is scary. At certain point, we were playing a really high defense, but they still were making shots, so the offense was needed today.”

The Hurricanes will now return to Coral Gables, Fla., for a three-game homestand at the Watsco Center that begins Thursday at 7 p.m., against NC State.

MIAMI HURRICANES POSTGAME NOTES
– Miami improved to 9-13 all-time versus North Carolina, including 5-2 over the past seven matchups dating back to Feb. 8, 2012.
– The Hurricanes are now 5-2 against Duke and North Carolina over the past three seasons after previously being 7-25 all-time against the ACC powerhouses.
– After scoring 100 points against the Tar Heels last year, Miami’s most ever in a conference game, the Hurricanes have now totaled 192 points in their last two meetings with North Carolina, outscoring the Tar Heels by 32 points.
– Miami’s last two 90-point outings have come against North Carolina, as the most recent time the Hurricanes reached that mark was in the 100-point showing last season on Jan. 26, 2017.
– Davenport surpassed 800 points and 650 rebounds in her career, Banks eclipsed 100 rebounds as a Hurricane, Gray moved past 50 assists at Miami, freshman guard Taylor Mason surpassed 50 points as a collegian, junior forward/center Emese Hof reached 650 points in her career and Bailey reached both 50 games started and 100 steals in her career, as well as eclipsed 2,000 minutes played.