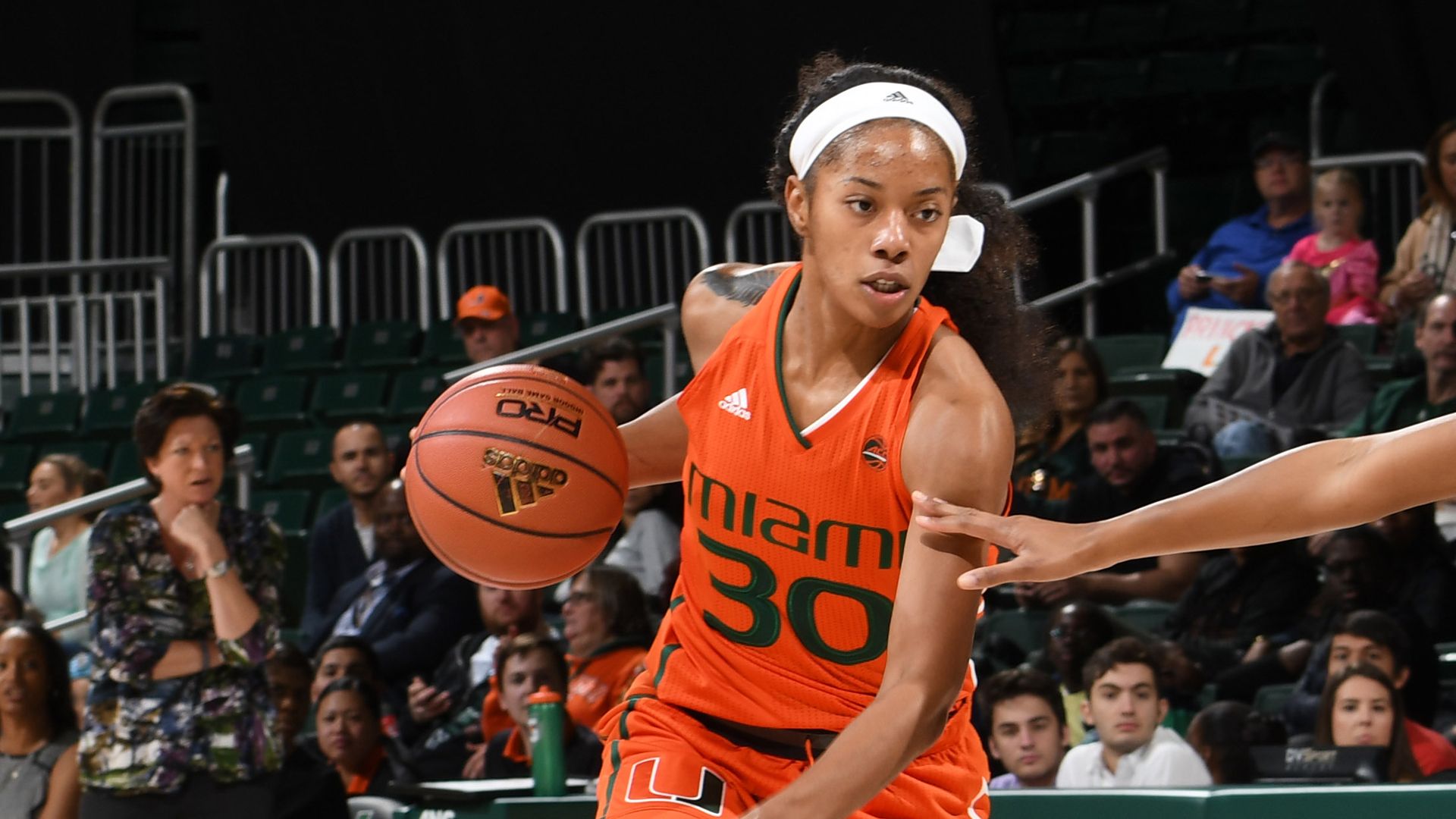 Senior forward/center Erykah Davenport paced Miami (15-7, 5-4 ACC) with a 22 points and the Hurricanes trailed for just 20 seconds of action, despite seeing the Hokies trim a 17-point deficit down to two.

“The 17-point lead was the story. I was really happy and pleased that we got that big of a lead, but I did expect a very close game and I knew it would come down to the last few possessions as we prepared for the game,” Miami head coach Katie Meier said. “We played perfectly to get that lead and then we really were very disjointed. I had some young kids having to make some high-level decisions. Frankly, it was one of our worst games in terms of our flow and our pace in the second half, but the first half was awesome.”

After a first quarter during which the Hurricanes held Virginia Tech (14-8, 3-6 ACC) to 2-of-10 shooting from 3-point range and committed zero fouls, Miami held a 20-14 advantage.

The Hurricanes went on a 12-2 run in a span of 2:20 during the second quarter, connecting on all three of their 3-point attempts during the stretch to up their lead to 14. Virginia Tech countered with a 10-2 run, but Miami dominated the remainder of the half, scoring 13 of the final 15 points to extend the cushion to 17, 47-30, entering the locker room.

Davenport went on a personal 8-2 run during the stretch to total 11 points in the period. Her 16 points at the break, on 5-of-7 shooting from the floor and 6-of-8 at the line, tied for the fourth-most in a half by a Hurricane this season, including the third-most in the first half.

The Hokies went on an 11-4 run to trim their deficit to 64-56 with 48 seconds left in the third, slicing the margin to single digits for the first time since there was 2:37 left in the second session. Miami’s lead stood at nine, 66-57, entering the final period.

Miami held a 13-point advantage, 71-58, with 5:40 to go when the Hokies began their comeback. After a 16-5 run to get within two, Virginia Tech forced a turnover and got the ball down two with 33 seconds left with a chance to tie or take the lead.

The Hurricanes, through forced a turnover of their own and then connected on six consecutive free throws, with three different players making a pair each, in the closing 24 seconds.

“Keke made a scout stunt steal and then she looked up and knew she’d done it,” Meier said. “She said, ‘I told you, I told you.’ She knew what they were going to run, she ran through their play and she did a great job.”

Davenport shot 6-of-8 from the floor and 10-of-12 from the line, setting new career highs in both free throws made and attempted. She registered her fourth 20-point game of her career and had the second-most points as a collegian.

Senior forward Keyanna Harris posted her first-career double-double, totaling 13 points, nine of which came in the third quarter, to go along with a game- and career-high 10 rebounds. It was her 11th-career outing with double-digit points, including her fifth this year, and she totaled her fourth-most points as a Hurricane. She shot 4-of-5 at the free throw line, tying her career best in makes and setting a new season high in attempts.

“Well, I thought Keke was making sure we won. Erykah carried us in the first half and we couldn’t do much with her in the second half,” Meier said. “They went zone and our shots we had in the first half just weren’t falling and we stalled out a ton, so we couldn’t get the ball inside. When they made that run in the third quarter, Keke was answering. She protected the lead for us. I thought that was big. Then, her last defensive play was the game winner.”

Freshman guard Kelsey Marshall had the co-second-most points of her young career, adding 14 in a career-high 28 minutes, while tying her top mark with five made field goals.

Miami’s bench doubled up that of Virginia Tech, outscoring the Hokies, 38-19. Meier’s team also shot 25-of-33 (75.8 percent) from the free throw line, setting a season best in makes and finishing with their second-most attempts. The Hurricanes’ 82 points tied for their second-most of the season and it was the fourth time this season they reached 80, including the first since Dec. 28, 2017 against Bethune-Coohman.

Following its first midweek bye of the season, Miami will resume play Sunday at 2 p.m., against North Carolina in Chapel Hill, N.C.

MIAMI HURRICANES POSTGAME NOTES
– Along with posting a 13th straight win over the Hokies and an eighth consecutive road victory, Miami improved to 19-6 in the all-time series, tied with St. John’s, Stetson and Syracuse for its fifth-most triumphs against any opponent.
– The Hurricanes’ 13 victories in a row over Virginia Tech are good for their third-longest streak against any opponent in program history, including the second-longest active mark, and the wins have come by an average of 12.4 points per game, with eight by double figures.
– Emery is the eighth player in the top nine in ACC scoring, entering Sunday’s games, Miami has faced this season and the Hurricanes have held those players to 14.3 points per game on 40.2 percent shooting, with six tallying below their current season average.
– The only Hurricane to notch a higher point total in a half this season than Davenport’s 16 in the first half Sunday is freshman guard Mykea Gray, who has 19 twice in the first and 18 once in the second.
– Davenport surpassed 250 free-throw attempts as a collegian, Marshall eclipsed 50 made field goals at Miami and Harris moved past 400 points in her career.