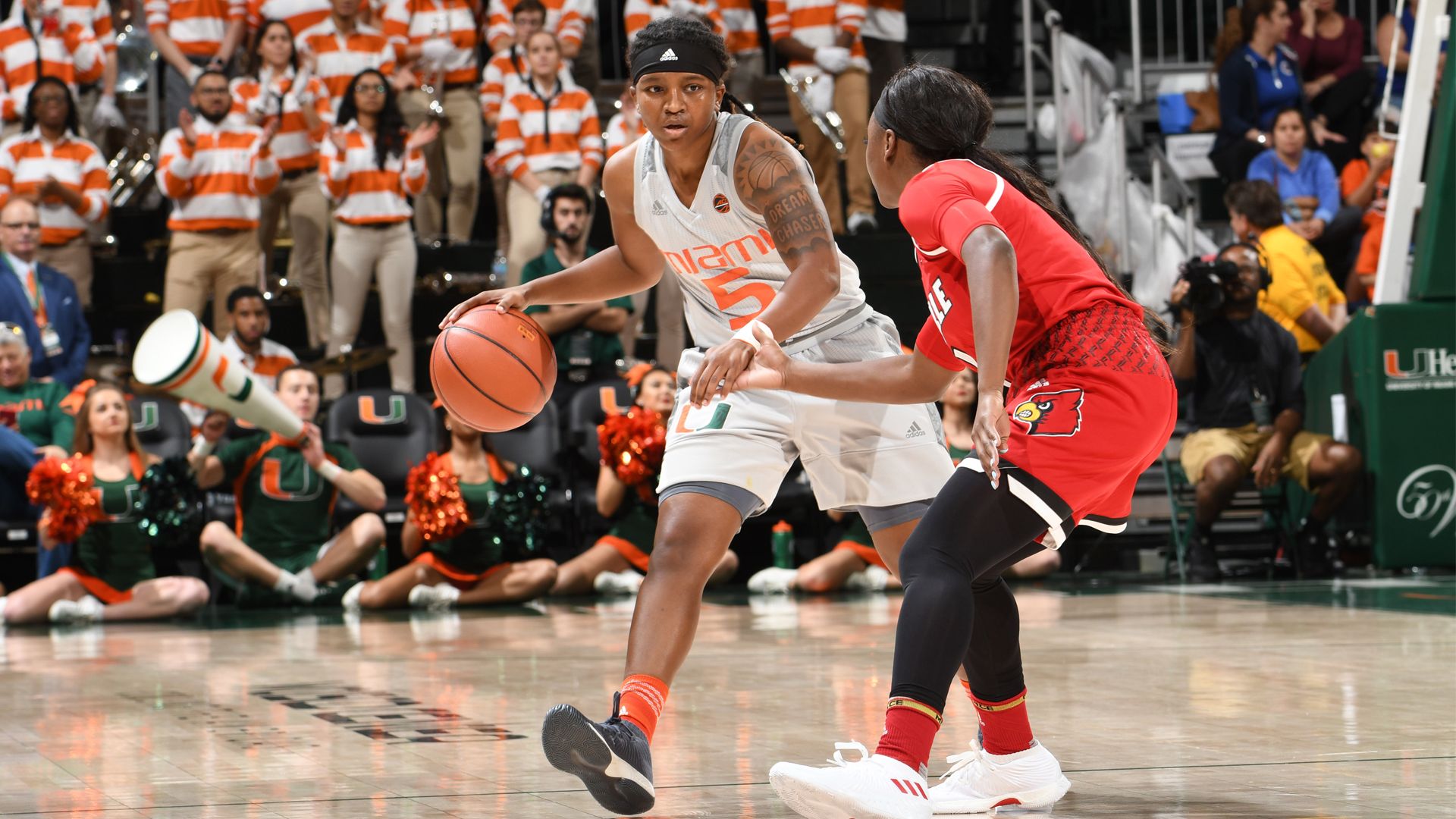 Despite the third 20-point game of junior forward/center Emese Hof’s career, Miami (14-7, 4-4 ACC) was unable to pull the upset in front of a season-high crowd that included students from 22 local elementary schools.

“It takes a combination of composure and toughness. We are an emotional team,” Miami head coach Katie Meier said. “We get hyped and we get tough, but then we lose our composure. We will grow through that. I’d rather have us emotional and tough, but make a few younger, immature mistakes, than to not have the fight. I was proud of the fight.”

Miami held Louisville without a field goal for a span of 5:26 in the second frame to pull within one, as the Cardinals missed six shots in a row, but the Cardinals answered with a 7-0 run to match their largest lead of the half.

A 3-pointer by Miami freshman guard Mykea Gray, who had 10 first-half points, stopped the run, but a buzzer-beating jumper by junior guard Asia Durr gave the Cardinals a 37-30 edge at halftime. For Durr, the third-leading scorer in the ACC, the basket was her only one of the game.

The Cardinals extended their cushion to as many as 13 points in the third period and took a 12-point advantage, 63-51, into the final session. Hof had seven points in the quarter for Miami, making both her field goals and all three of her free throws.

Louisville extended its lead to 16 in the last frame and while Miami trimmed it down to eight in the closing minute, the Hurricanes could not claw all the way back.

To tally her team-high 20 points, the most she has scored in an ACC game as a collegian, Hof shot 7-of-9 from the floor and 6-of-6 at the free throw line. The seven made field goals matched her ACC high, while the six makes from the stripe eclipsed her prior top mark in any game.

“We only had nine assists and Emese had 20 points. If Emese’s going to have 20 points, most of them should be assisted,” Meier said. “She had to fight and get them on her own. So, we’ve got to do a better job at that, but I thought we needed points in the paint to win today. We definitely executed in the second half and when we had a mismatch we got her the ball.”

Gray totaled 13 points, while fellow freshman guard Kelsey Marshall added 11. Senior forward/center Erykah Davenport just missed a fourth straight double-double, finishing with 10 points and nine rebounds to go along with a career-high six steals, matching the most by a Hurricane this season.

Hines-Allen led all scorers with 26 points, shooting 11-of-13 from the field to notch her second-highest point total of the season. The two-time Blue Ribbon Panel First Team All-ACC performer also pulled down a game-high 11 rebounds to record a double-double.

Led by redshirt senior guard/forward Shaneese Bailey, Miami held Durr, a national player of the year candidate, to just seven points on 1-of-7 shooting. The Douglasville, Ga., native matched her season low for points, did not make a 3-pointer for the first time in 2017-18 and did not tally multiple made field goals for the first time this year.

“You know if you are a perimeter player and if you are someone who really needs to get free,” Meier said, “if you come to play at Miami, you are in for a rough night because Bailey can lock you down.”

The Hurricanes had a 31-18 edge in bench scoring, but the Cardinals shot 41.7 percent (5-of-12) from 3-point range in their sixth-smallest victory of the campaign.

Miami will be back on the court Sunday at 2 p.m., when it takes on Virginia Tech in Blacksburg, Va., for the first of two meetings this season with the Hokies.

MIAMI HURRICANES POSTGAME NOTES
– The Hurricanes dropped to 1-4 all-time against the Cardinals, including 0-4 since Louisville joined the ACC.
– In addition to being the highest attended game of the season at the Watsco Center, Thursday’s crowd of 2,706 was the third-highest for any game Miami has played, home or away, in 2017-18.
– Louisville is just third team to eclipse 80 points against the Hurricanes this season, with all three being ranked in the top 15.
– The Hurricanes have now faced seven of the top nine scorers in the ACC entering Thursday, holding them to an average of just 14.3 points per game on 38.8 percent shooting from the field and 32.1 percent shooting from 3-point range.
– Gray eclipsed both 250 points and 500 minutes played in her young career, Hof surpassed 100 made free throws as a Hurricane, Marshall moved past 150 points as a collegian and freshman guard Taylor Mason eclipsed 250 minutes played at Miami.