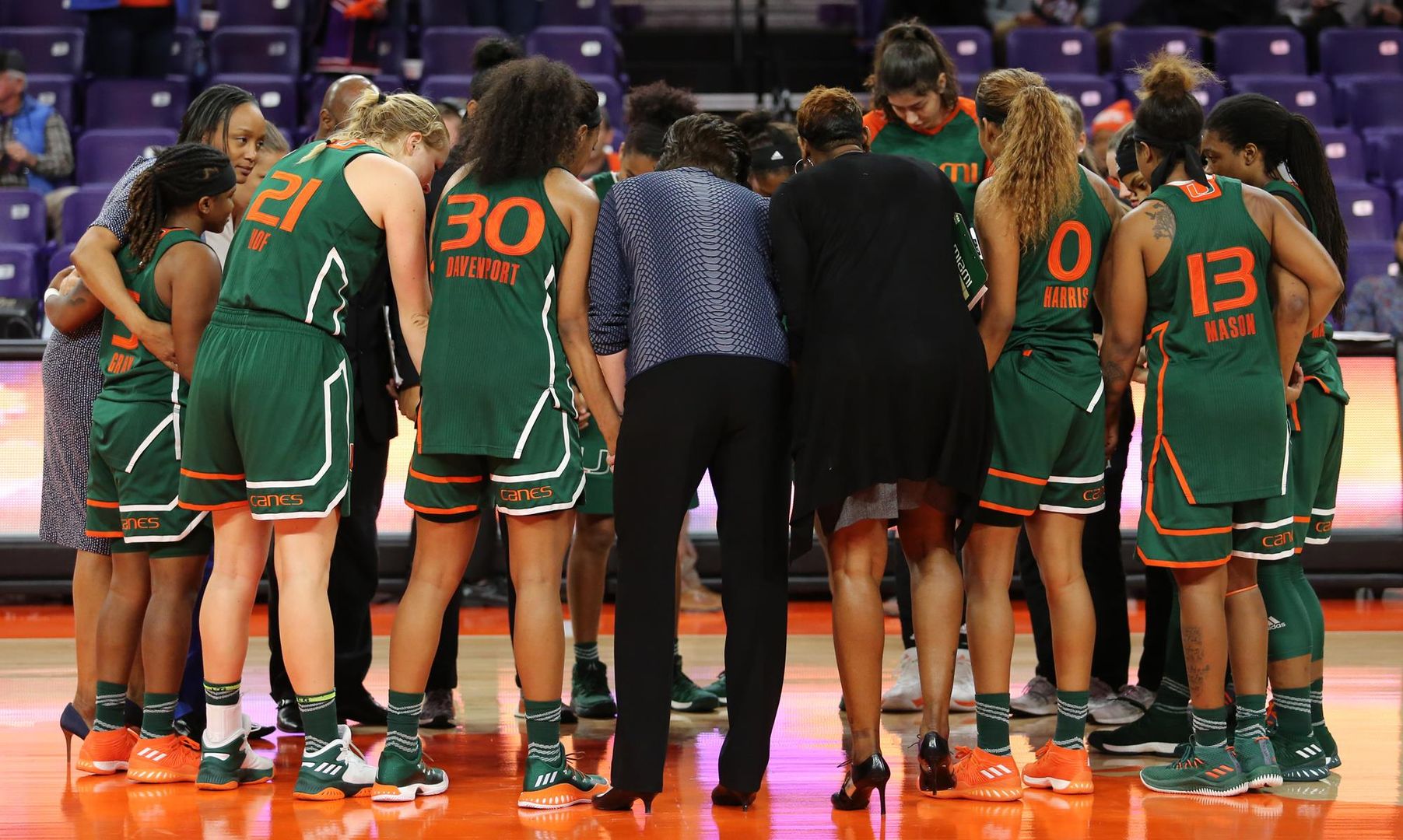 “I think of our first eight baskets, we had seven assists. That is something we’ve really been working on,” Miami head coach Katie Meier said. “That was just very unselfish. We were missing Emese [Hof]. Her defense is so great, but also, she is one of our better passers and facilitators. So, I really kind of challenged the team to share the ball and limit their time per touch, and they did.”

Sophomore guard/forward Sarah Mortensen connected on both of her 3-point attempts in the opening period to help Miami build a 19-10 lead after 10 minutes of action.

The Hurricanes closed the first half on a 17-5 run, capped by a buzzer-beating 3-pointer from freshman guard Mykea Gray, to take a 20-point lead, 40-20, into the locker room. Boston College (6-13, 1-5 ACC) made just one of its final eight field goal attempts of the frame.

Miami shot 6-of-9 (66.7 percent) from beyond the arc in the first half, while the Eagles finished just 1-of-8 (12.5 percent). Mortensen made all three of her shots from distance before the intermission to help the Hurricanes post their most 3-point makes and best 3-point percentage in a half this season.

The Hurricanes continued their tremendous defensive performance after the break and extended their cushion to 23 points, 54-31, with one period remaining.

Senior guard/forward Shaneese Bailey totaled a team-best 12 points for the Hurricanes, who had nine of their 10 players who took the court make at least one field goal. Mortensen finished with a season-best 11 points, the second-most of her career, and tied her best marks in made field goals (four) and made 3-pointers (three).

For Boston College, which had its second-lowest point total of the year, sophomore forward Georgia Pineau had a game-high 16 points and freshman guard Milan Bolden-Morris added 11. The rest of the Eagles combined for just 16 total points.

The 43 points allowed by the Hurricanes were the fewest they have conceded since conceding that same total Dec. 6, 2016 against Loyola Chicago. Miami last gave up fewer than 45 points in a road game on Nov. 17, 2015, when it held Old Dominion to 35.

“BC is a really good 3-point shooting team and luckily we had just come off a game [against Syracuse] where we really had to defend the 3-pointer,” Meier said.” So, we were a little bit more prepared for that rhythm. I thought our upperclassmen were being mature, staying disciplined and covering the shooters.”

The Eagles finished the game 4-of-18 (22.2 percent) from 3-point range, tying for the sixth-lowest clip from long range by a Miami opponent this season.

The Hurricanes now return home to take on second-ranked Louisville Thursday at 11 a.m., at the Watsco Center in Coral Gables, Fla.

MIAMI HURRICANES POSTGAME NOTES
– The Hurricanes, who have played and defeated Boston College more than all but two other teams, improved their all-time mark against the Eagles to 27-17, including 10-1 over the past 11 meetings.
– Through three quarters of play, Pineau had 14 points on 6-of-8 shooting (75.0 percent), while all other Eagles had 17 points on 7-of-30 (23.3 percent) shooting.
– Miami used its fifth different starting lineup of the season, as Hof, a junior forward/center who had started the Hurricanes’ last 14 games, did not play Sunday due to a fever.
– Bailey has now recorded double-digit points in eight of her 14 starts as a Hurricane, compared to just one of her 39 outings as a reserve at Miami.
– Davenport, who became the first Hurricane with three straight double-doubles since Shawnice “Pepper” Wilson in February 2013, surpassed 750 points in her collegiate career, while Mortensen reached 50 made field goals as a collegian.