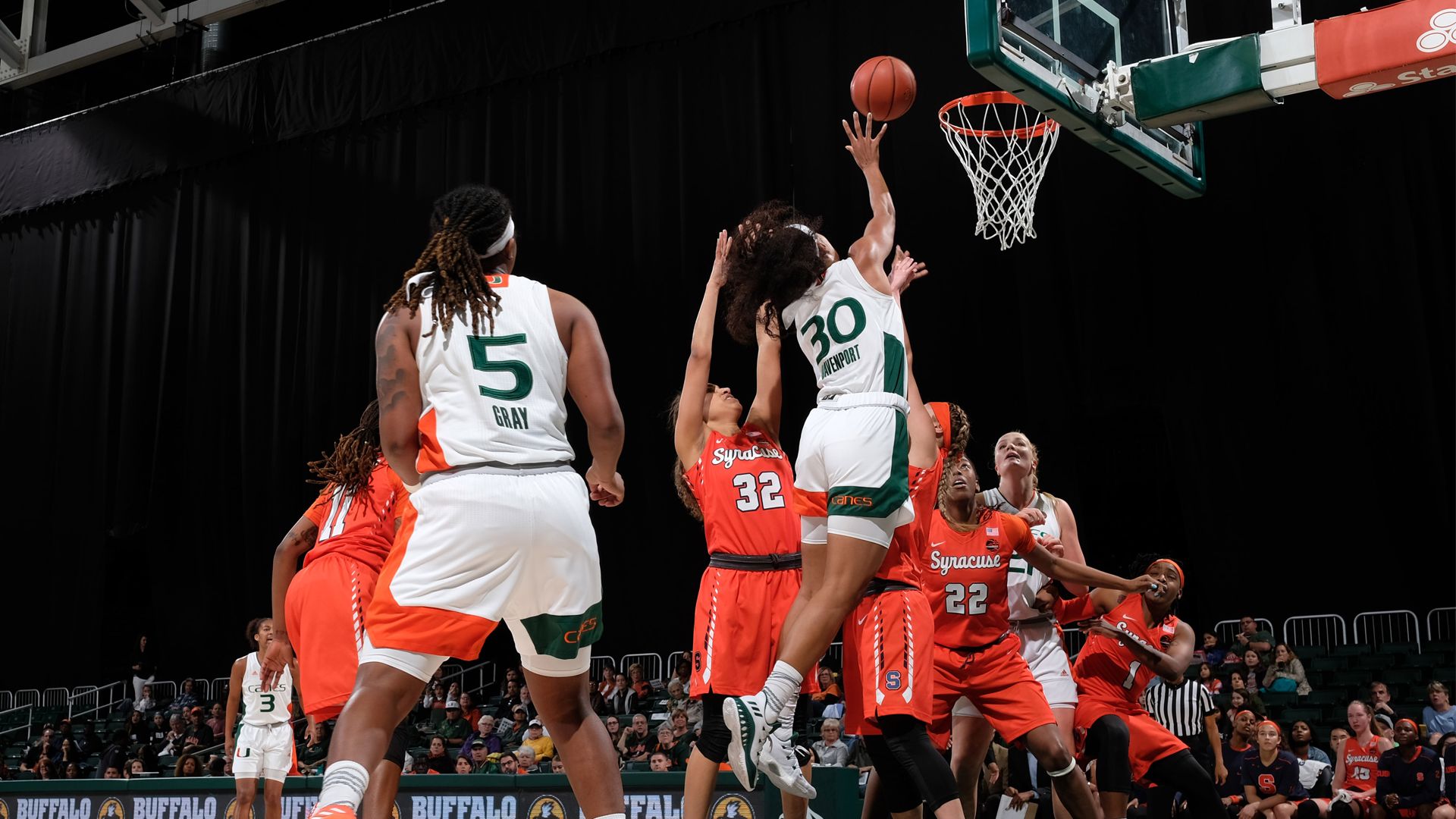 CORAL GABLES, Fla. – Despite a near triple-double by Syracuse sophomore guard Tiana Mangakahia, the University of Miami women’s basketball team posted an impressive 72-67 triumph Thursday night at the Watsco Center.

Miami (13-6, 3-3 ACC) senior forward/center Erykah Davenport logged her sixth double-double of the season, leading all players with both 21 points and 13 rebounds, to help the Hurricanes earn their 750th all-time win.

“What most I liked is that Syracuse only had six steals because that was a big deal for us to not give them live-ball turnovers,” Miami head coach Katie Meier said. “We took some bad shots early, some people weren’t playing well, they took a bad shot and we sat them down because we considered a bad shot a turnover. It was time for everyone to realize that we had to go with the ball-control offense and to get the ball inside. That fourth-quarter lineup did exactly that.”

Davenport had nine points and six rebounds in a first quarter during which both teams scored 22 points. The Hurricanes went on a 15-5 run after the media timeout to take a three-point lead, but a Syracuse (14-5, 2-4 ACC) buzzer-beating 3-pointer evened the score.

During the second frame, Miami went on a 17-3 run, including scoring 11 straight points, during which it shot 7-of-9 from the field and built a 42-26 edge with 3:11 on the clock. The Orange scored the final five points of the session to make it 42-31 at the break.

Senior forward Keyanna Harris scored 12 points in the first half for the Hurricanes, more than she totaled in all but three full prior games in her career.

Syracuse closed the third quarter on an 8-0 run and trimmed Miami’s lead to four, 55-51, with 10 minutes remaining.

The Orange pulled within two points three times in the final session, the last such occurrence with 2:42 left, but Miami never lost the lead. The Hurricanes shot 5-of-6 from the free throw line in the final 31 seconds to seal the win.

Davenport’s 21 points on 10-of-14 shooting were the second-most in her career, while her 13 rebounds tied for her fifth-most. Her fellow senior in the frontcourt, Harris, also had her second-most points as a Hurricane, finishing with a season-high 16, setting a career high with seven made field goals.

“Erykah is just having an amazing year. I think she’s an all-conference player now and I am really proud of that. I think she has proven it night after night,” Meier said. “Keke is a good facilitator and she’s got an ability to take it from our guards to our post. We needed someone who can slide through and swing it. Keke blended the two lines and that was really important because Syracuse tries to split you.”

Mangakahia, the NCAA leader in assists per game, posted 17 points, 14 assists and nine rebounds, but the Hurricanes forced her into 10 turnovers, the most by a Miami opponent this season.

Miami finished the game with a 44-26 edge in paint points, as well as a 26-8 advantage in bench points, allowing zero in the second half. The Hurricanes also limited Syracuse to 9-of-35 shooting (25.7 percent) from 3-point range.

Up next for the Hurricanes is a road trip to Chestnut Hill, Mass., where they will take on Boston College Sunday at 1 p.m.

MIAMI HURRICANES POSTGAME NOTES
– The Hurricanes improved their all-time mark against the Orange to 19-9, including 2-3 in ACC play, and topped Syracuse at home for the first time since Jan. 16, 2002.
– Miami is now 750-532 (.585) all-time over the program’s 46 seasons, including 172-74 (.699) since the start of the 2010-11 campaign.
– The second session was the 14th time this season, against the 10th different team, Miami has allowed single-digit points in a quarter.
– Mangakahia, who had 10 assists in the first half alone, became the first Miami opponent to log double-digit assists in a game since Emily Pollock of Austin Peay on Nov. 28, 2008.
– Davenport surpassed 300 made field goals at Miami, Harris eclipsed 150 made field goals in her career, redshirt senior guard/forward Shaneese Bailey moved past 400 rebounds and reached 50 steals as a collegian, junior forward/center Emese Hof eclipsed 1,500 minutes played in her career, freshman guard Endia Banks surpassed 500 minutes played at Miami and senior guard Neydja Petithomme reached 100 rebounds as a collegian.