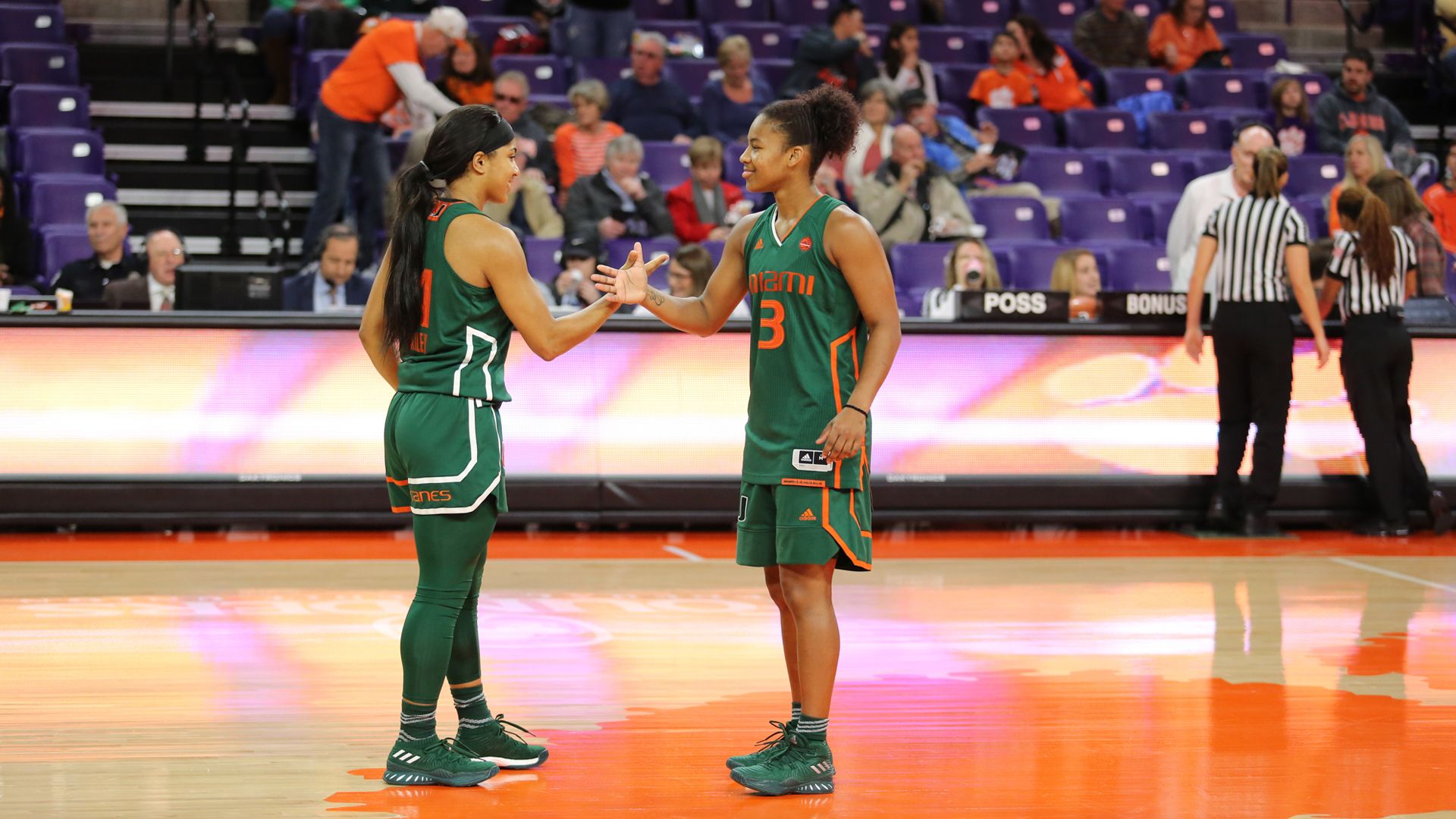 Miami (12-6, 2-3 ACC) trailed for just 30 seconds and used a balanced scoring attack, led by freshman guard Kelsey Marshall’s game- and career-high 19 points, to handle the Tigers and get back on the winning track.

“The foul trouble we were in, that was not fun. In the first half, we had almost every starter [dealing with that],” Miami head coach Katie Meier said. “We were playing new lineups. Thankfully, we’ve used our depth. Lots of adversity in this game and a lot of uncomfortable moments, but we fought through and that’s all we needed to do.”

The Tigers trimmed Miami’s edge to seven, 37-30, entering the intermission despite the Hurricanes shooting 51.7 percent (15-of-29), their second-best mark before the break this season. Miami’s lead was its first at the half in ACC play this season.

Marshall gave the Hurricanes their largest lead of the game, 54-41, on a 3-pointer with 1:31 left in the third period. The Tigers countered with five straight points and Marshall capped the session with a pair of free throws to put Miami’s advantage at 56-46 headed into the last frame.

Clemson pulled within seven in the fourth quarter, but did not make it a two-possession game at any point. Marshall scored eight of her points, including hitting two of her career-high-tying four 3-pointers, in the final five minutes to seal the win.

The career outing for Marshall also included new highs in assists (four), made free throws (five) and made field goals (five), with the first mark co-leading all players and pacing the Hurricanes.

“Kelsey has changed. She definitely has been way more business-like, seeking out what she needed to do on the defensive end to get more playing time and she did it,” Meier said. “You need to hit shots over Clemson and we knew that Kelsey would be really important. It was her four assists to one turnover that I thought was great, and she had a huge steal and then got the bucket. She’s just a very composed kid.”

Senior forward/center Erykah Davenport registered her fifth double-double of the season and seventh overall with 10 points and a co-game-high 11 rebounds to go along with a season-high four steals. Junior forward/center Emese Hof also pulled down 11 boards, setting a new season best and eclipsing her prior top mark in ACC play as a Hurricane.

“I thought Erykah and Mese handled the glass really, really well,” Meier said, “but the rest of our team needs to get in there and help them out.”

Sophomore post Kobi Thornton posted 18 points on 7-of-9 shooting for Clemson, while the rest of the team finished 15-of-41 from the field. Sophomore guard Jaia Alexander also logged 18 points and junior guard Danielle Edwards added 12.

The Hurricanes shot 16-of-20 from the free throw line in the victory, with the 80.0 percent clip tying their second-best mark of the year. Miami’s 31 bench points were its fourth-most of the season.

After two straight road outings, Miami heads home for its next game, a Thursday night contest against Syracuse at 7 p.m., live on RSN from the Watsco Center.

MIAMI HURRICANES POSTGAME NOTES
– Miami improved its record in the all-time series against Clemson to 11-6, including 8-1 in the past nine meetings, with four straight wins.
– This was the Hurricanes’ first win at Littlejohn Coliseum since Feb. 7, 2013, as they fell at Clemson in 2014 and played at Jervey Gym in the 2016 victory.
– Prior to the first media timeout, with 4:32 left in the opening quarter, 11 fouls were called, with seven going against Miami.
– The Hurricanes’ triumph snapped just their third three-game losing streak within a season since the start of the 2010-11 campaign.
– Redshirt senior guard/forward Shaneese Bailey surpassed 300 free-throw attempts and reached 900 points as a collegian, freshman guard Endia Banks moved past 150 points in her career, Hof eclipsed 400 rebounds at Miami and Davenport both surpassed 600 rebounds and reached 50 assists as a collegian.