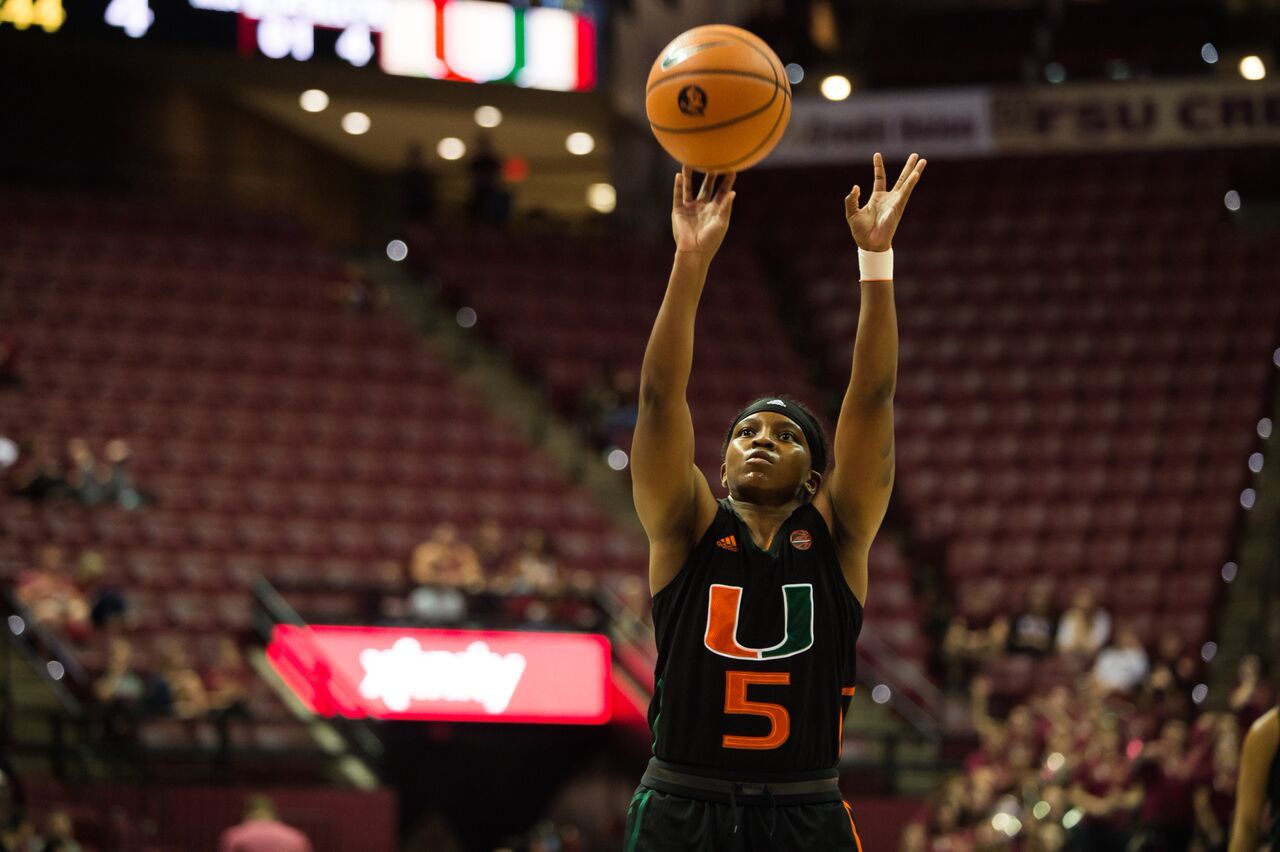 “I thought Florida State just had a brilliant performance and they shared the basketball,” Miami head coach Katie Meier said. “If you just look at the rebounding numbers and the assist numbers, you could just tell that one team was more mentally alert and more connected.”

The Seminoles went on an 11-0 run in the final 2:15 of the second quarter and built a 57-31 lead entering the locker room. Their point total and 59.2 percent clip (22-of-37) from the field were both the most by a Miami opponent in a half this year.

Florida State continued its strong play after the intermission and stretched its advantage to 85-43 after three periods.

The Hurricanes turned in their best offensive and defensive outputs of the game in the fourth quarter, outscoring the Seminoles, 24-20, in the final 10 minutes.

Miami’s top three scorers were freshmen guards Endia Banks, Kelsey Marshall and Mykea Gray. Banks had a team-high 14 points, the second-most of her young career, while Marshall tied her second-highest total with 11 and Gray also had 11.

Redshirt senior guard/forwards Shaneese Bailey chipped in 10 for the Hurricanes, tallying double-digit points for the sixth time in the last nine games, including the fourth in a row.

“Our upperclassmen were the ones who were turning the ball over tonight. Our freshmen didn’t,” Meier said. “It was our upperclassmen, they know better. We can’t have a performance like that and expect to win in Tallahassee.”

The Seminoles became the first team to post 100 points against Miami since top-ranked Maryland totaled 111 on Jan. 10, 2007. This is the 10th time in program history, including the second under Meier, the Hurricanes have allowed triple-digit points.

Florida State finished the game 12-of-26 from 3-point range (46.2 percent), good for the most makes from long range by a Miami opponent this year and the second-best percentage from long range. The Seminoles, who matched the record for the most made 3-pointers in a game in program history, had a 20-7 edge in assists and a 45-28 advantage in rebounding.

The Hurricanes resume action Sunday afternoon in Clemson, S.C., when they square off with the Tigers at 2 p.m.

MIAMI HURRICANES POSTGAME NOTES
– With Thursday evening’s defeat, the Hurricanes moved to 14-42 in the all-time series against Florida State.
– This was the 200th ACC game for Miami since joining the league for the 2004-05 season and its record sits at 94-106, including 75-42 over the last 117 outings.
– The Hurricanes have dropped three consecutive games within a season for just the third time since the start of the 2010-11 campaign.
– After playing three top-15 teams picked in the top four of the ACC preseason poll, Miami has come up short in three of its opening four conference games for the first time since 2009-10.
– Senior forward/center Erykah Davenport surpassed 2,000 minutes played as a collegian, senior forward Keyanna Harris surpassed 100 free-throw attempts at Miami and senior guard Neydja Petithomme reached 50 steals in her career and Gray moved past 50 made free throws as a Hurricane.