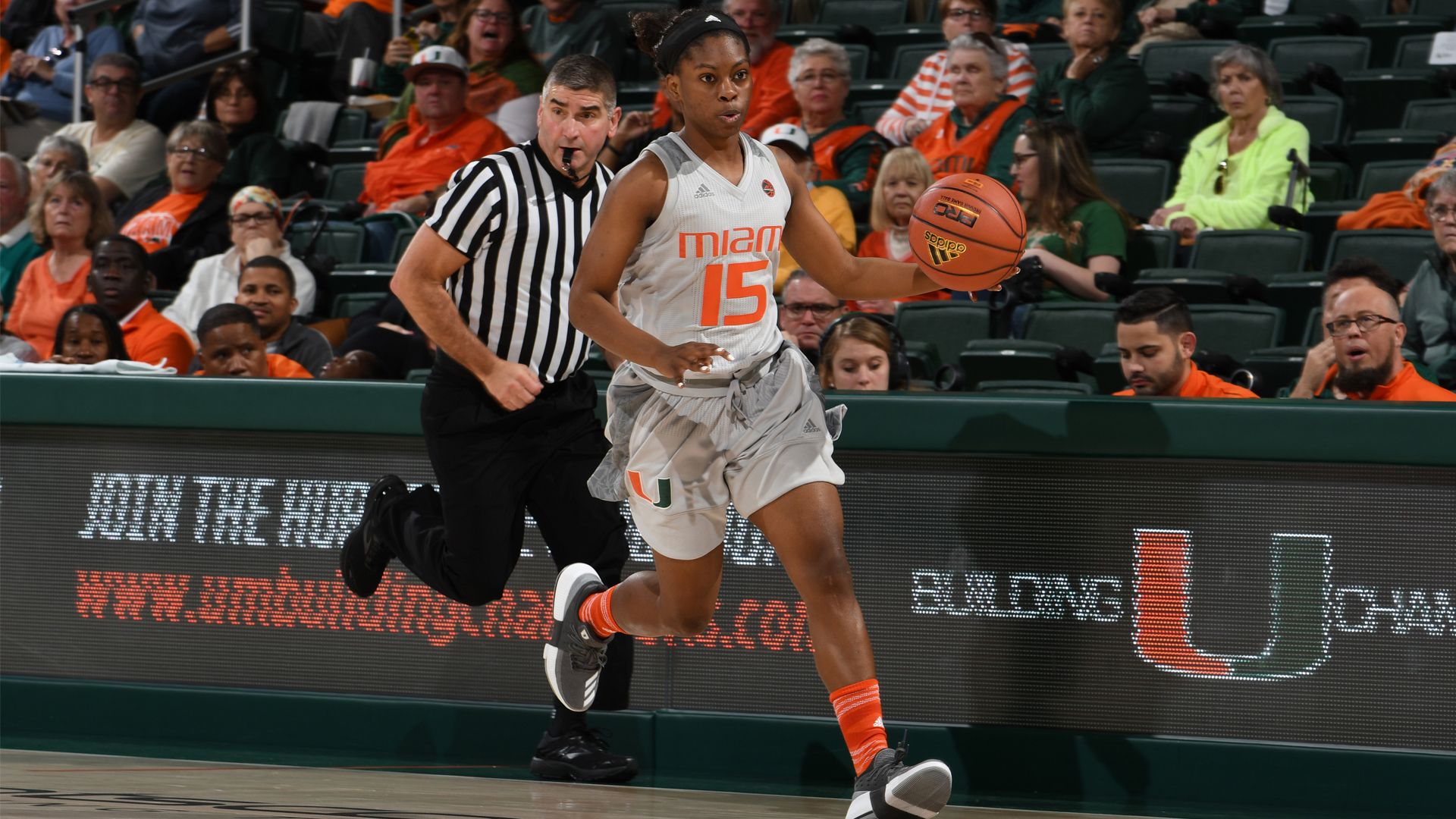 CORAL GABLES, Fla. – The University of Miami women’s basketball team dropped a 61-50 decision to Wake Forest Sunday afternoon at the Watsco Center in its first home game of 2018.

“One player can really ignite a fire in the ACC. On any given night, we know any team can beat anybody,” Miami head coach Katie Meier said. “We are unproven and we had an attitude [where] we just weren’t the hungrier team and that really disappoints me.”

With the score tied late in the second period, Wake Forest went on a 6-0 run to take its then-largest lead of the game. Miami redshirt senior guard/forward Shaneese Bailey connected on a midrange jumper at the buzzer to slice the deficit to four, 28-24, at the break.

Both teams struggled from 3-point range in the opening 20 minutes, with the Demon Deacons posting a 2-of-12 mark (16.7 percent) beyond the arc and Miami going 0-of-5.

The Hurricanes quickly surged ahead in the third period and led for most of the session, but Wake Forest sophomore guard Alex Sharp connected on a 3-pointer in the closing second to even the score at 41 through 30 minutes.

Junior forward/center Emese Hof led the Hurricanes with 14 points on 7-of-9 shooting, tying her career high for made field goals in an ACC game. She added a career-high-tying four blocked shots to pass two-time All-American Shenise Johnson for No. 10 on Miami’s all-time leaderboard with 93 blocks. Bailey added 10 points on 5-of-6 shooting, while rest of the Hurricanes finished 10-of-33 from the floor.

Senior guard Amber Campbell led the Demon Deacons to the victory with 22 points and a game-high eight rebounds. She also notched seven steals, the most by an opposing Miami player in at least six-plus seasons.

“There was a moment in the game when one player, Amber Campbell, just was igniting a fire under her team,” Meier said. “They just fed off of it and her energy, her rebounding, her steals and their system. She was just killing us and we didn’t do one thing to stop it. We didn’t make one adjustment.”

The last time the Hurricanes fell at home to an ACC team not receiving votes in either poll was Feb. 20, 2014, in a 69-48 decision against Syracuse. It is the second time Miami has suffered such a regular season home loss in that stretch, joining a 74-64 defeat versus St. John’s on Dec. 3, 2017.

Wake Forest forced Miami into 24 turnovers and committed just 12, en route to posting a 27-4 margin in points off turnovers. The game featured nine ties and 10 lead changes before Wake Forest took final control with 9:27 to play.

“I think we got a little bit complacent and that’s just not who we are,” Meier said. “We just don’t have the talent and the experience to ever not outplay the other team. So, that’s all I’m going to ask from the team. I don’t care if the shots don’t fall, but we got outplayed and outworked and that’s unacceptable, but credit to Wake Forest, because they [worked really hard] in this game.”

MIAMI HURRICANES POSTGAME NOTES
– The Hurricanes fell to 10-9 all-time against the Demon Deacons, dropping a decision for just the third time in the last 10 meetings.
– Miami did not allow a single Wake Forest point for a span of six minutes and 23 seconds in the first and second quarters, going on a 10-0 run during the at stretch.
– After not playing to a tie through three quarters once in the first 14 games of the season, the Hurricanes have been tied after 30 minutes in each of their last two outings.
– Bailey has now scored double-digit points in six of her 10 starts as Hurricane, compared to doing so just once in her other 39 outings at Miami.
– Hof surpassed both 600 points and 250 made field goals as a collegian, while freshman guard Kelsey Marshall eclipsed 100 points in her young career.