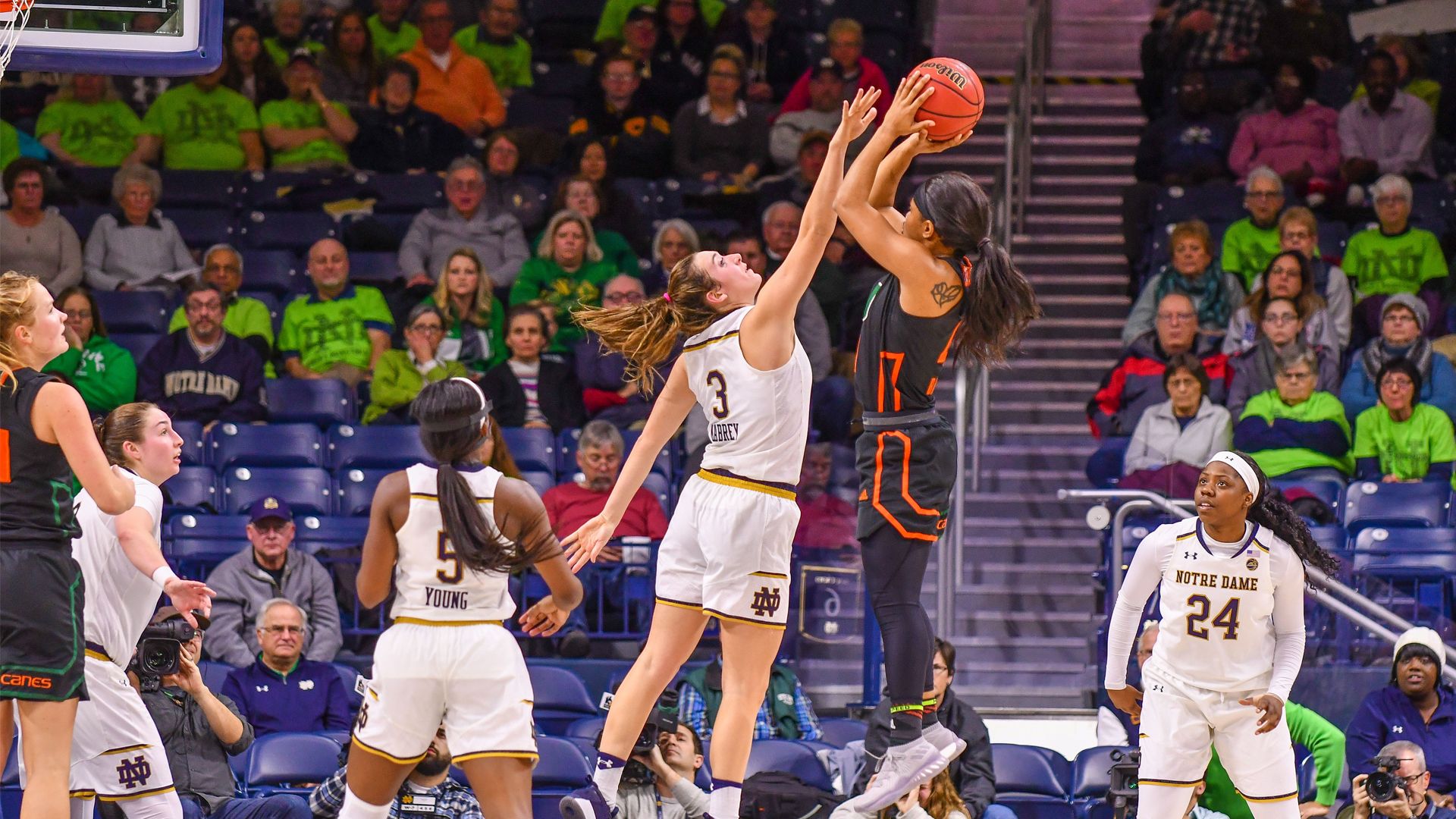 NOTRE DAME, Ind. – The University of Miami women’s basketball team led by 11 at second-ranked Notre Dame Thursday night, but came up just short in an 83-76 decision at Purcell Pavilion.

Miami (11-4, 1-1 ACC) senior forward/center Erykah Davenport poured in a game- and career-high 24 points and the Hurricanes became the second team all season to not trail the Fighting Irish through three quarters, but it was not quite enough in front of 7,828 frenzied fans.

“I told the team, we were so much better than we were at the beginning of the season, but we are also so much better than we were a week ago,” Miami head coach Katie Meier said. “That’s what’s fun and it will keep us energized. We really expected to come in here and win, we really did. So, we are disappointed. I ask them to get one percent better every day, but in the last two weeks, we have gotten 20 percent better. I am fired up.”

The Hurricanes jumped out to a 6-0 lead in the first 58 seconds and upped their edge to 14-3 with 4:27 on the first-quarter clock. Miami joined No. 4/5 South Carolina and No. 16/16 Oregon State as the lone teams to hold double-digit advantages on the Fighting Irish this season, while top-ranked Connecticut’s largest lead was nine.

“Our time per touch [was great]. We were really focused on our game plan,” Meier said of the strong start. “The kids did a really nice job. We moved the ball really sharply and it was brilliant, but then Notre Dame made some adjustments.”

After Miami led for 12 minutes and 25 consecutive seconds, Notre Dame pulled even for the first time since it was 0-0, then took its first lead, 28-26, 34 seconds later with 6:45 to go before the break. The Hurricanes pulled even three times, but Fighting Irish went on to take a 40-36 edge into the locker room.

The Hurricanes limited the ACC’s second-leading scorer, Arike Ogunbowale, to six points on 1-of-10 shooting in the half, but fellow junior guard Marina Mabrey tallied 14 points prior to the intermission.

Just as it did to open the game, Miami scored the first six points of the second half to quickly regain the lead. After Notre Dame charged ahead for its then-largest lead of the game, 55-50, Miami scored the final five points of the frame, holding the Fighting Irish scoreless for the last 3:58 of the third. Davenport scored 14 of the Hurricanes’ 19 points in the session.

Notre Dame stretched its lead to as many nine points in the fourth quarter and while Miami trimmed the deficit to three, it could not get any closer.

In addition to setting a career high in points, Davenport also doubled her best prior mark in made field goals, finishing 12-of-19 from the floor. She made more field goals than she had ever attempted and surpassed her top ACC scoring mark by 11 points.

“She’s got physicality, but her quickness [worked for her], too,” Meier said of Davenport’s performance. “Notre Dame had some physicality inside, they just weren’t as quick.”

Junior forward/center Emese Hof tallied 14 points in a career-high 33 minutes, while redshirt senior guard/forward Shaneese Bailey added 13 to go along with a game-high eight rebounds and career-high four assists in 35 minutes, her most as a Hurricane.

Miami joined Connecticut as the only teams to outrebound the Fighting Irish this season and outscored Notre Dame in the paint, 48-42, finishing with its second-highest total of the year. The Hurricanes shot 47.1 percent (32-of-68) from the field, but the Fighting Irish countered that with a 22-of-26 (84.6 percent) mark at the line.

The Hurricanes, who had their win streak snapped at six, will be back in action Sunday at noon when they host Wake Forest at the Watsco Center.

MIAMI HURRICANES POSTGAME NOTES
– The Fighting Irish improved their all-time mark against the Hurricanes to 19-4, including 6-1 since joining the ACC.
– The only other time this season Notre Dame did not lead through three quarters was Nov. 19 at then-No. 18/17 Oregon State, when it trailed by one.
– Davenport was limited to just nine minutes in the first half due to foul trouble, but scored 16 points om 8-of-11 shooting in her first 11 minutes on the court, making two more field goals in that time alone than her prior career high for a full game.
– This is the first time this season Miami has dropped a game started by Bailey, Davenport, Hof and freshman guards Endia Banks and Mykea Gray, winning each of the five prior outings.
– Gray eclipsed 200 points at Miami, Banks surpassed 50 assists as a collegian, Hof moved past both 50 steals and 150 free-throw attempts as a Hurricane and senior forward Keyanna Harris moved past 1,500 minutes played in her career.