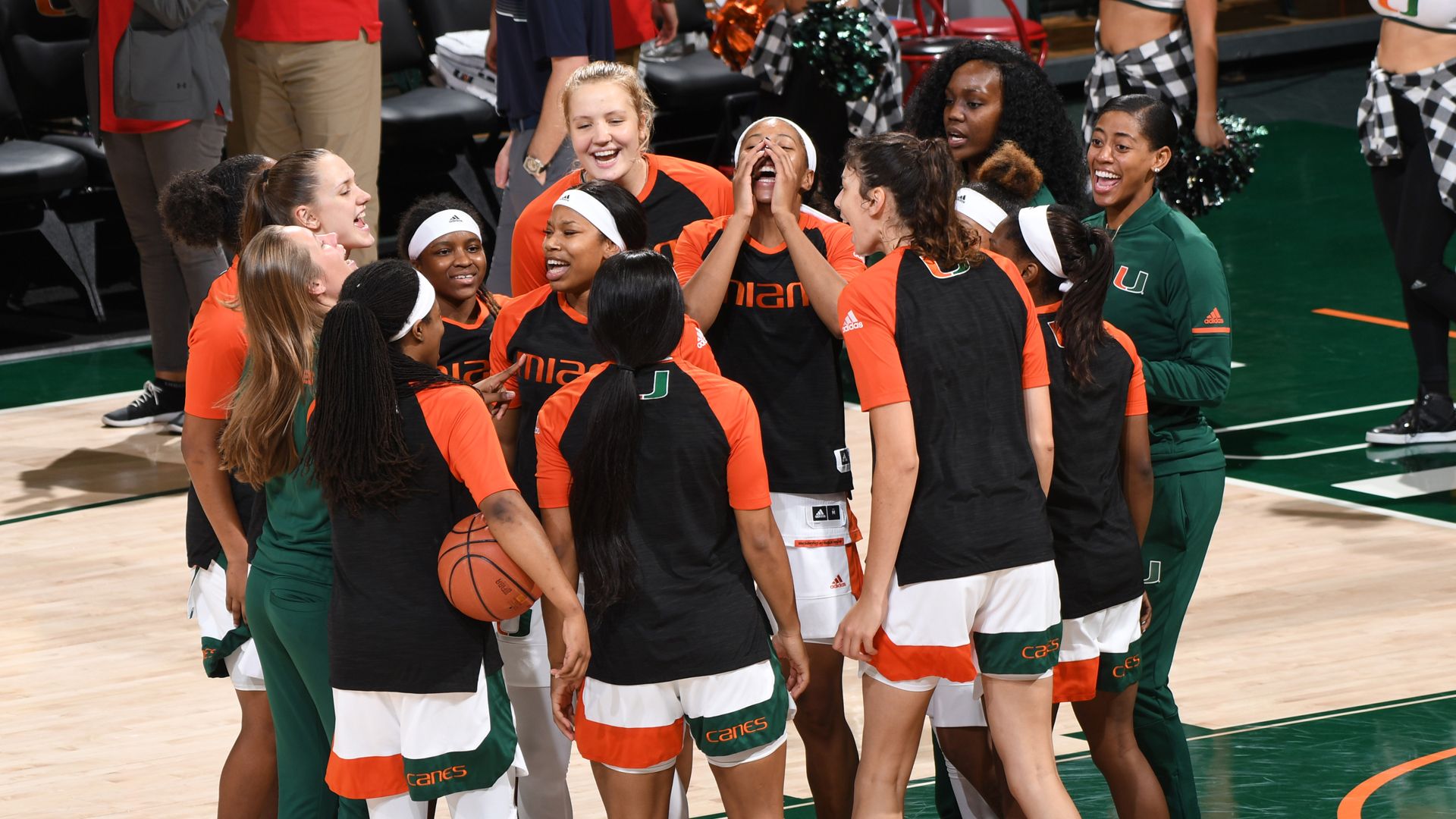 Despite senior forward/center Erykah Davenport, the team’s second-leading scorer and top rebounder, missing the first game of her career, Miami picked up its second win in three days at Coliseo Rubén Zayas Montañez.

“Erykah’s presence was sorely, sorely missed and we had Keke [Harris] and Shaneese Bailey play different roles for us,” Miami head coach Katie Meier said. “We had a lot of adversity today; the foul trouble we were in and Emese [Hof] still got limited minutes, it was a lot going on. Southern Illinois was very excited. They were more excited to play than we were. We are not in a situation with all the adversity that we had to ever not be the most excited team on the court.”

After a back-and-forth opening quarter that included baskets by both teams in the final eight seconds, Miami held a narrow 21-19 lead over the Salukis.

With Keyanna Harris leading the charge, the Hurricanes played stellar defense in the second frame. The senior forward also had a buzzer-beating layup to give Miami its largest lead of the first half, 11 points, entering the intermission, as the score sat at 43-32.

The Hurricanes pushed their advantage to 13 in the third period, but Southern Illinois (5-6) trimmed its deficit down to five, 54-49, by the end of the session.

Freshman guard Endia Banks, who played a career-high 36 minutes, had two terrific finishes at the rim in the first minute of the final quarter, quickly increasing Miami’s edge up to nine. Southern Illinois pulled back within three, but the Hurricanes answered.

Harris, who had two 3-pointers on the season entering Wednesday’s game, connected on a pair from the corner in the final three minutes to help the Hurricanes go back up by nine and take the 10-point win. Senior guard Neydja Petithomme also had six points down the stretch in the victory.

“Well, the seniors [stepped up],” Meier said of how the team closed the game. “Keke hit two huge threes and Neydja—she’s been working and grinding and she was huge–really played like a veteran.”

Harris tallied a season-high 14 points, the second-most in her career, and shot 6-of-8 from the floor, tying her season high in made field goals. The Riviera Beach, Fla., native also logged a career-high six steals, the most by a Hurricane in the last three-plus seasons, while playing a career-best 32 minutes.

Banks also notched 14 points and added a game-high five assists, while freshman guard Kelsey Marshall totaled 10 points, all in the first half. Petithomme finished with nine points, tying her most as a Hurricane, as did freshman guard Mykea Gray and junior forward/center Emese Hof.

“I thought Endia Banks was an All-ACC player today,” Meier said. “I just saw a new level in her game in terms of making sure Miami won. The timeliness of the plays she made for us on the offensive end and defensive end were incredible.”

The Hurricanes finished the game with a 38-20 edge in paint points and also led, 26-17, in points off turnovers.

After seven days off, Miami will conclude non-conference action Dec. 28, when it hosts Bethune-Cookman at 7 p.m., at the Watsco Center.

MIAMI HURRICANES POSTGAME NOTES
– The Hurricanes have now won both of their meetings with Southern Illinois, with the two matchups coming exactly 22 years apart, both on Dec. 20.
– Miami improved its record in games played outside the continental United States to 5-3, including 4-2 in non-continental areas of America.
– Petithomme had as many points in the fourth quarter (six) as she had accumulated in all but one prior full game as a Hurricane, while Marshall amassed more points before halftime than she had in all but two full previous games this season.
– Davenport did not play due to a lower extremity injury, marking the first time she missed a contest in her career and snapping streaks of both 110 consecutive appearances and 23 straight starts.
– Harris tallied her 100th appearance as a Hurricane, Petithomme played in the 50th game of her career and Banks surpassed 100 points at Miami.