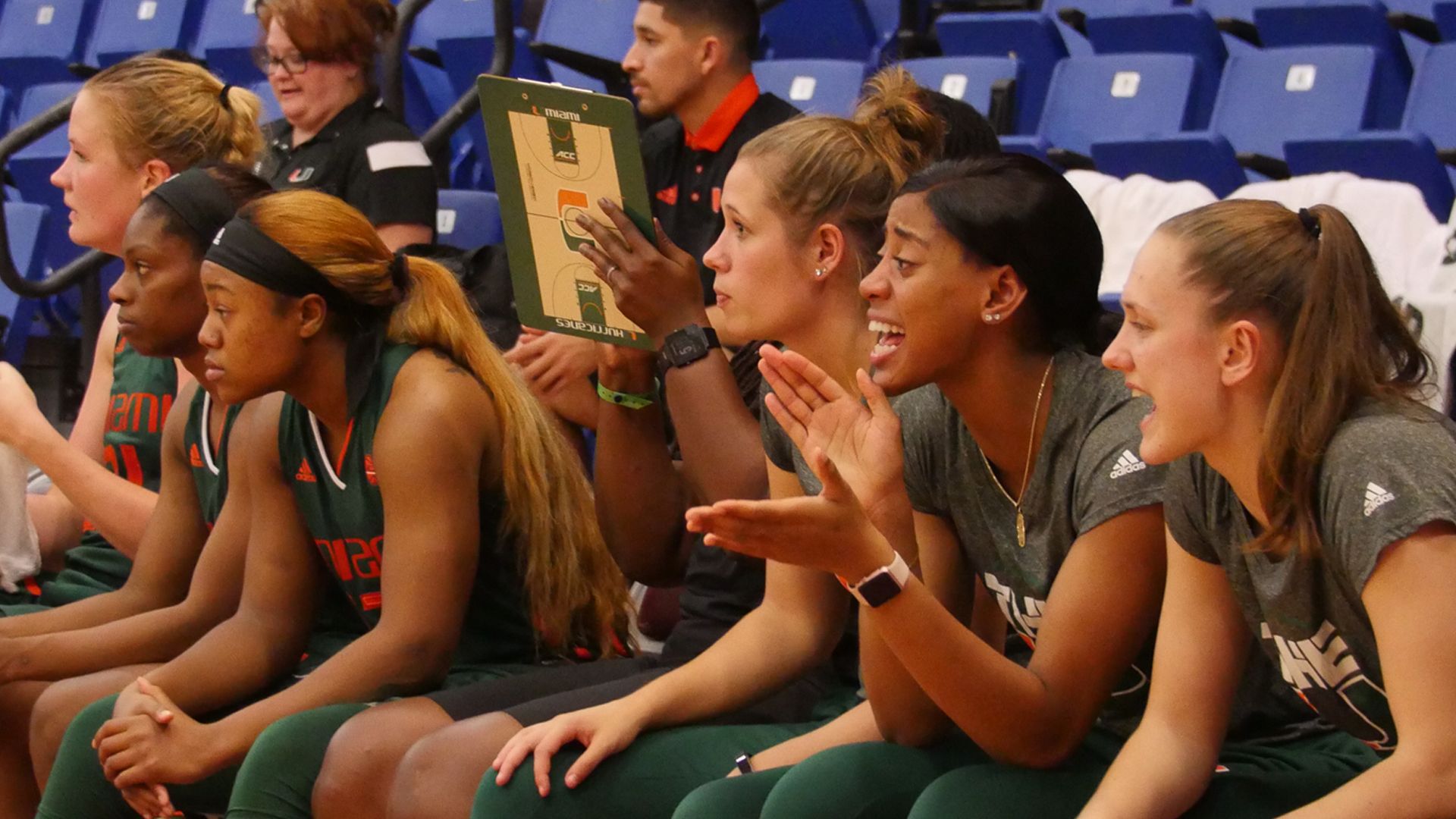 Junior forward/center Emese Hof registered her second straight double-double and led all scorers with a season-high 21 points to help Miami (8-3) control the game from start to finish.

“She’s very efficient,” Miami head coach Katie Meier said of Hof. “Obviously, they don’t have a lot of size and that was part of our game plan, but they are so scrappy that they double and try to get the passes. I thought she positioned herself really well. She was thinking. Her timing is back [after injury] and her teammates were actually moving the ball well for her.”

Miami dominated the second frame and stretched its advantage to 19 points, 40-21, by the time it entered the locker room. Nine Hurricanes made at least one field goal in the opening 20 minutes, as Miami shot 17-of-34 (50.0 percent) from the floor, its second-best mark in a half this year.

The Hurricanes upped their lead again in the third period behind a 26-point display and took a 21-point edge, 66-45, into the last session.

Miami continued its strong play in the final 10 minutes and eclipsed 80 points for the first time this season, as well as earned its fourth triumph by at least 24 points, including the second in a row.

Hof finished 10-of-12 from the floor, with the 10 makes matching her career high. She also tied her career-best mark with four blocks and equaled her season high with 10 rebounds, tying for the game lead.

Freshman guard Endia Banks filled the stat sheet with six points, a co-game-high 10 rebounds and five assists, while senior guard Neydja Petithomme had six assists, her most as a Hurricane.

“The rebounds from our guards. Endia rebounded hard, Keke [Harris] rebounded hard,” Meier said of what she liked from her team. “Serena-Lynn was playing really valuable, in important minutes. I also liked that we got the ball inside with purpose.”

The Hornets’ 56 points were its fewest of the season and the four-time reigning Division I leaders in 3-pointers made per game were held to 7-of-30 shooting (23.3 percent) from long range. Miami also scored 54 points in the paint and allowed just 14, marking the second straight game it finished at least plus-40 in paint points.

The Hurricanes’ second game of the Puerto Rico Classic is to be determined, as Kennesaw State was unable to make the trip due to power outages at the Hartsfeld-Jackson Atlanta International Airport. Miami had been scheduled to play the Owls Tuesday afternoon.

MIAMI HURRICANES POSTGAME NOTES
– Miami is now 3-1 this season versus teams it is playing for the first time, as it has beat Sacramento State, Alabama State and Vermont, as well as fallen at Colorado.
– The Hurricanes upped their record in games played outside the continental United States to 4-3, including 3-2 in non-continental areas of America.
– The only half this season in which Miami shot better than it did in the first half Monday was the second half against Alabama State, when the Hurricanes posted a 51.3 percent clip, finishing 20-of-39.
– Bailey has now scored in double figures in three of her five starts as a Hurricane, while doing so once in her other 39 appearances.
– Gray surpassed 150 points and 50 made field goals as a Hurricane, Hof eclipsed 550 points at Miami and Geldof eclipsed 50 rebounds in her career.