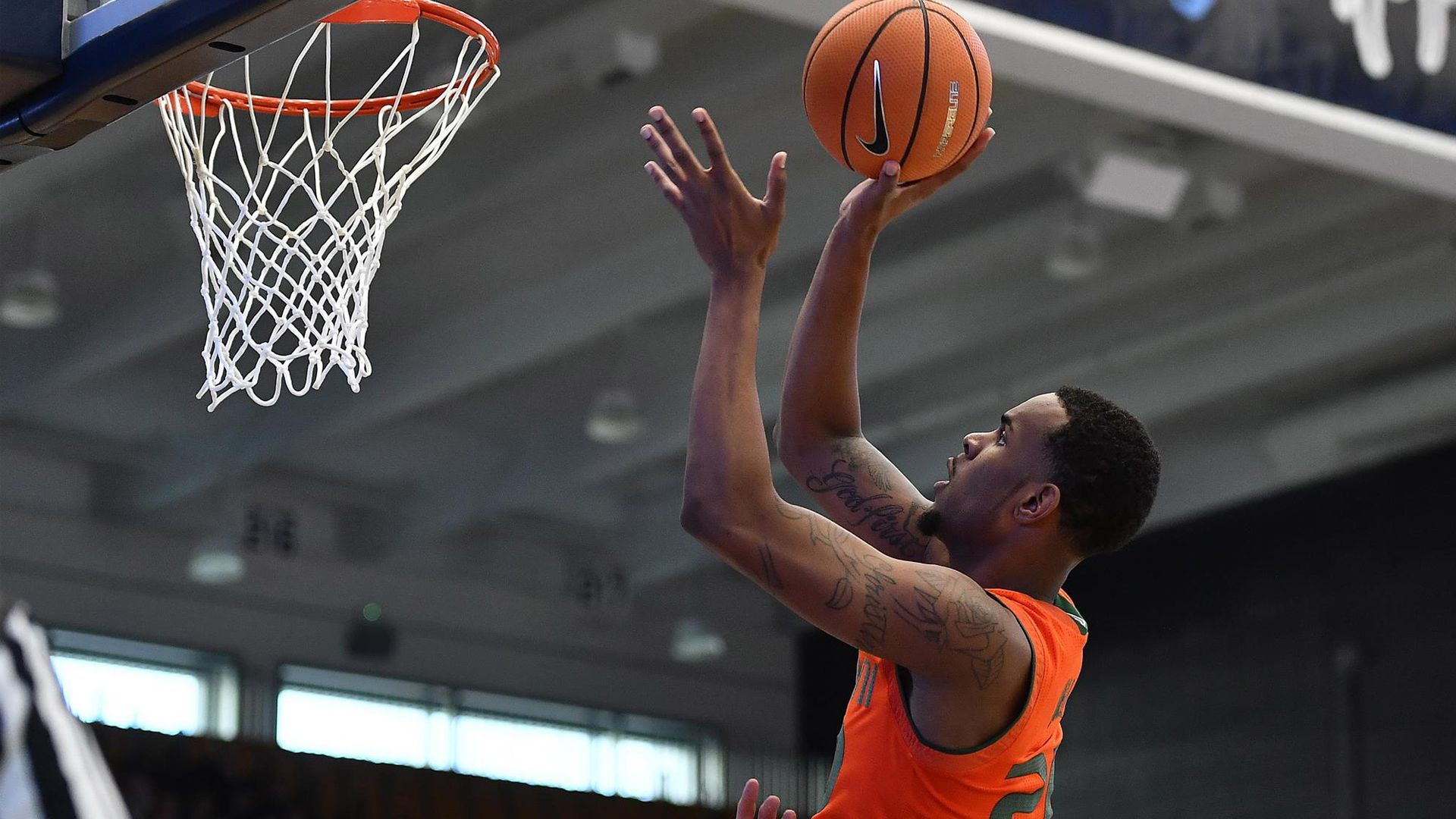 One of six remaining unbeaten teams in Division 1 entering the weekend, the Hurricanes (9-0) ripped off 13 of the game’s first 15 points on their way to a 21-point lead. The scrappy Colonials pulled within seven with 13:53 remaining, but the rally fizzled down the stretch.

Playing its first game since Dec. 5, Miami shot 41 percent from the field, including a 5-for-21 day from beyond the arc. The Hurricanes made at least half of their field-goal attempts in seven of their first eight games.

George Washington shot 18.5 percent (5 for 27) from the field in the first half and finished at 30.2 percent overall. Miami ranks second nationally in scoring defense and field goal defense.

DJ Vasiljevic scored 10 points for Miami, which is 9-0 for the first time since the 2007-08 team opened the season with 12 consecutive wins.

Team
• Miami improved to 9-0, its best start since opening 12-0 in 2007-08; UM is one of six remaining unbeaten teams in the nation.
• The Hurricanes did not trail in the game and have led for 310 minutes, 54 seconds of the 360 minutes this season (86.3 percent). UM has trailed for just 24:32. Miami has yet to trail in the second half this season.
• Miami held GW without a field goal for eight minutes, 35 seconds in the first half.
• Miami also held GW scoreless for a five-minute, 21-second stretch in the first half. It marks the Miami defense’s fifth scoreless stretch of five-plus minutes this year.
• GW’s 15 points in the first half marked the fewest by a Miami opponent in any half this year (previous was 19 by La Salle in first half)
• Miami has held seven of nine opponents this season to fewer than 60 points.
• This marked just the second time this year Miami shot less than 50 percent (season low in shooting is 36.7 vs. La Salle).
• Miami limited GW to its season lows in scoring (50) and shooting (30.2%).
• UM matched a season low with eight turnovers.

Individual
• Sophomore guard Bruce Brown Jr. returned after missing one game because of a left-hand injury. Brown matched a career high with three steals in the game.
• Ja’Quan Newton played in his 104th career game.
• Dewan Huell recorded his second career double-double, scoring 15 points and grabbing a career-high 12 rebounds.
• Huell reached double figures in scoring for the seventh time in nine games.
• With 15 points off the bench, Lonnie Walker IV scored in double figures for the third straight game.
• Anthony Lawrence II had nine rebounds, his sixth game of at least seven boards this year.