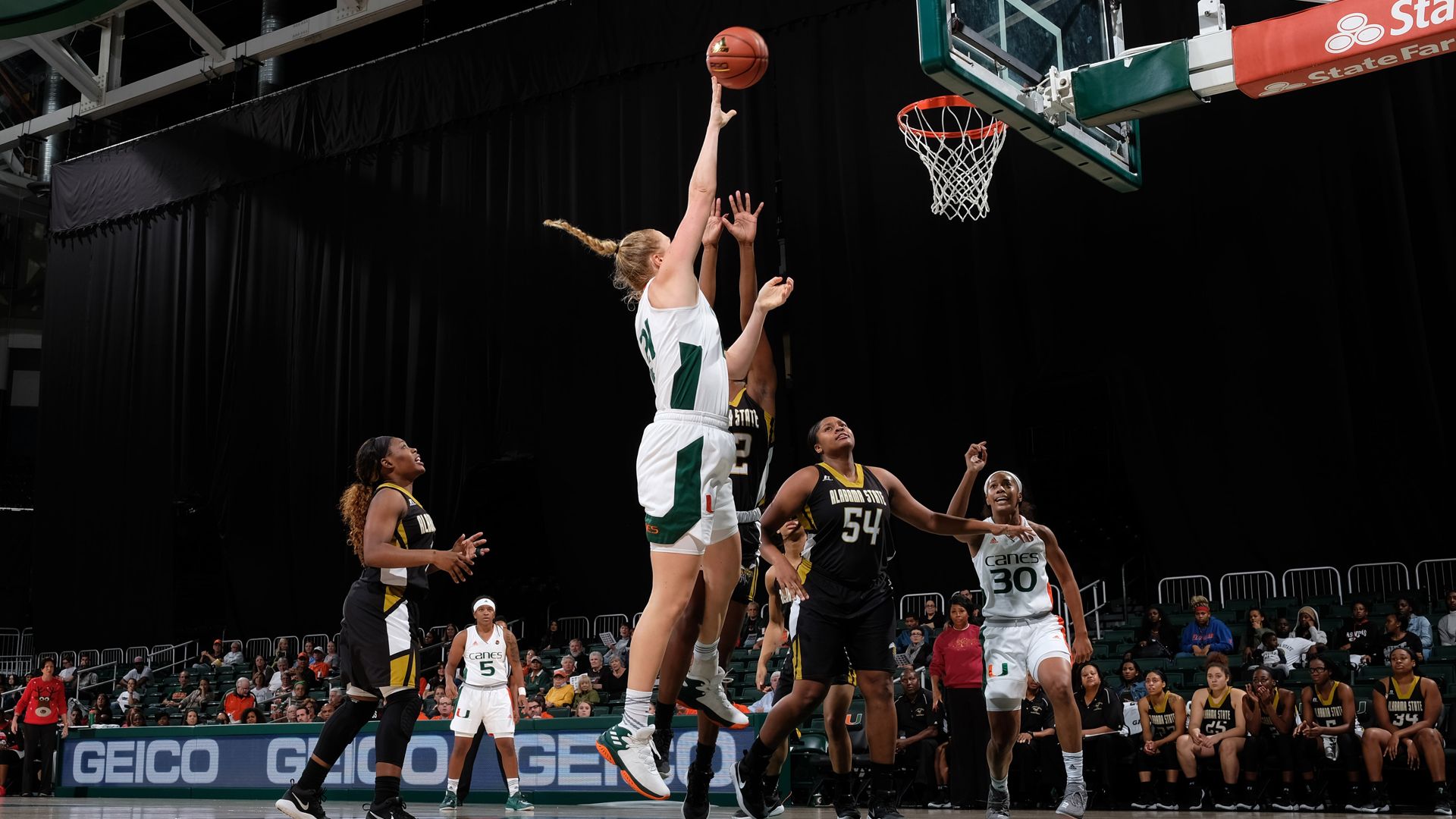 Junior forward/center Emese Hof notched her third-career double-double and Miami (7-3) dominated down low, outscoring the Lady Hornets by 44, 50-6, in the paint.

“We were absolutely committed to high-low, especially with Erykah [Davenport] and Emese together,” Miami head coach Katie Meier said. “That was the game plan and it was nice because the younger kids are confident enough to not search for their own game. They are checking down and doing what the coaches say because they know that eventually their points will come, too. That was good discipline, which was nice to see.”

The Hurricanes set the tone in the key immediately, grabbing seven offensive rebounds in the first 70 seconds. Hof scored nine points in the frame, eclipsing her prior season high for a full game, to help Miami build a 19-12 edge.

Staunch defense by Miami limited the Lady Hornets to just 6-of-25 shooting (24.0 percent) in the first half.

Miami continued its strong play at both ends of the court in the final period and stretched its advantage to as many as 48 points, which proved to be its final margin of victory. It was the Hurricanes’ largest win since a 51-point triumph over Illinois State on Nov. 28, 2014.

The 14 second-half points by Alabama State passed the Lady Hornets’ first-half total and New Orleans’ first-half tally for the fewest in a half by a Miami opponent this season.

Gray led all scorers with 18 points, shooting 8-of-9 in the second half after being held scoreless in the first 20 minutes. She also tied her career high with a co-game-best five assists.

Senior forward/center Davenport amassed 14 points, tying her career highs in made field goals (six) and assists (three), while Hof finished with 13 points and a co-game-high and season-best 10 rebounds. Redshirt senior guard/forward Shaneese Bailey had 10 boards, her most as a Hurricane, and sophomore center Serena-Lynn Geldof set career highs in points (eight), rebounds (seven), made field goals (four) and minutes (19).

Miami concluded the game with a 59-37 edge in rebounding and an 18-1 advantage in second-chance points. The Hurricanes also led 17-7 in steals, 23-6 in assists and 19-2 in fast-break points.

Alabama State posted the lowest marks of the season by a Miami opponent in points, field goals made (nine) and field-goal percentage (15.8 percent), as well as the co-lowest total in assists. The Lady Hornets’ 31 points matched their fewest in a contest this year.

“At halftime, I thought that we were pointing a lot on defense, but not talking enough,” Meier said of the defensive effort. “So, I told them to put their shoulders back and play like an ACC ball club. Don’t just point and assume; we don’t have ESP with each other like how dolphins talk.”

Up next for Miami is a trip to the Puerto Rico Classic, where the Hurricanes face Sacramento State Monday at 4:30 p.m., and Kennesaw State Tuesday at the same time.

MIAMI HURRICANES POSTGAME NOTES
– Miami is now 2-1 this season against opponents it is playing for the first time, as it has defeated Alabama State and Vermont, as well as dropped a decision at Colorado.
– Friday marked the third time this season Miami held its opponent below 50 points, joining its contests against Vermont (49) and New Orleans (46).
– The double-double was the first of the season for Hof and her first in nearly two years, with the last one coming against Indiana on Dec. 20, 2015.
– Davenport, the ACC’s leading rebounder, has now tallied at least six boards in all 10 games and registered double-digit points seven times.
– Hof surpassed 350 rebounds in her career, Davenport eclipsed 550 rebounds in her career, Gray and fellow freshman guard Endia Banks both moved past 250 minutes played at Miami and redshirt senior guard/forward Shaneese Bailey eclipsed 300 made fields as a collegian.