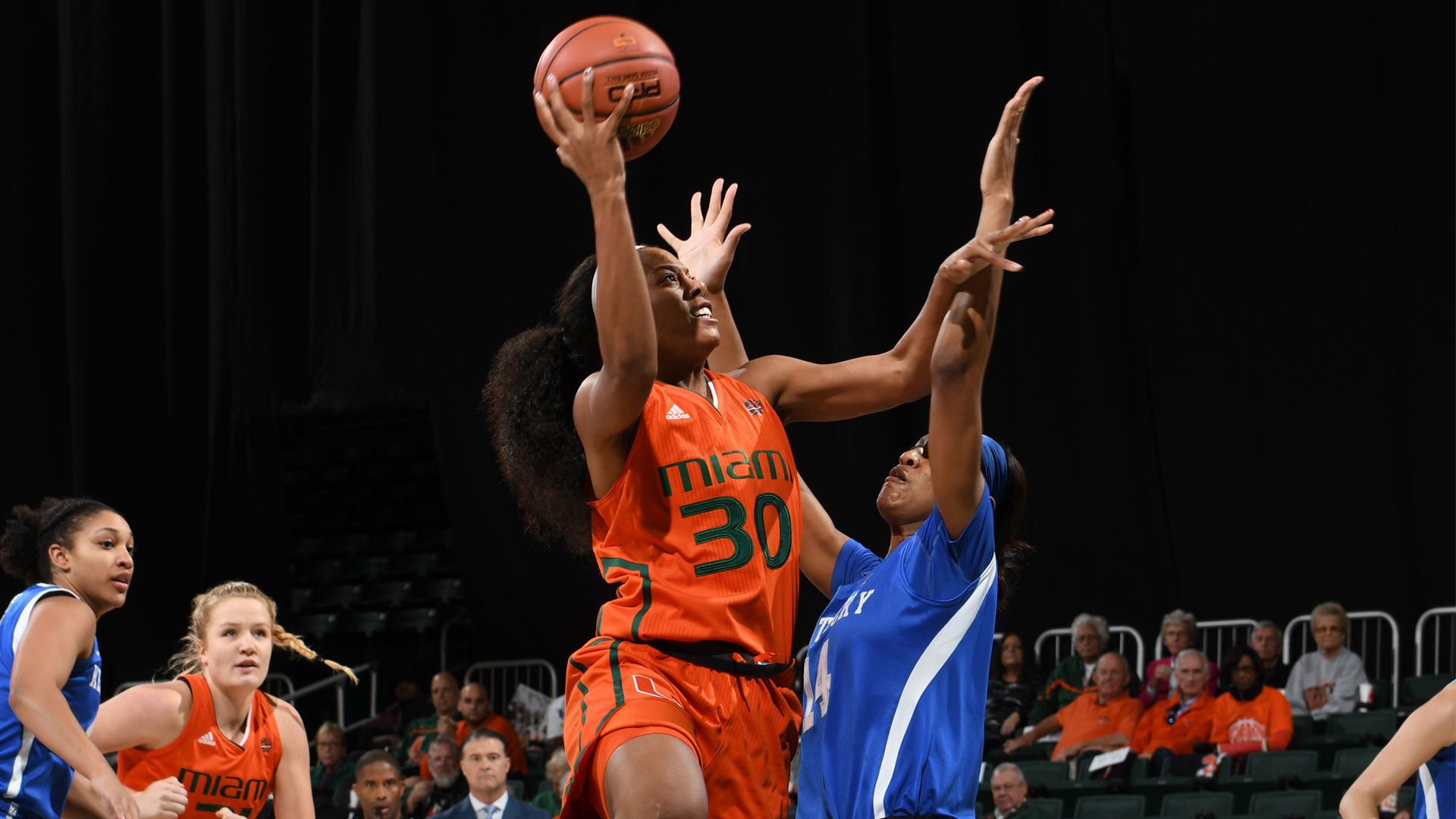 CORAL GABLES, Fla. – The University of Miami women’s basketball team earned an impressive 65-54 win over No. 20/23 Kentucky Sunday afternoon at the Watsco Center.

Led by senior forward/center Erykah Davenport’s third double-double of the season, Miami (6-3) overcame a seven-point halftime deficit to earn its first top-25 triumph of the year.

“I said in the locker room that at one point in this game one team would break and that the team that doesn’t break will win this game,” Miami head coach Katie Meier said. “I told the team there will be runs, but you cannot be emotional [when reacting] to the runs. Expect it; bend, but do not break . . . We just kept fighting and our defense really held in the first half.”

Davenport scored eight points on 4-of-5 shooting in the first period, but Kentucky (8-3) held an 18-14 edge through 10 minutes of action.

The Wildcats scored three points in the final nine seconds of the second quarter to extend their cushion to 30-23 entering the intermission. Both sides shot under 39 percent from the floor in the first half.

Miami went on a 20-8 run, including scoring eight of the first 10 points, in the first 6:03 of the third frame to take a 43-38 lead. The Hurricanes held Kentucky without a field goal for the final 3:08 of the session and took a 51-48 advantage into the fourth.

“That third quarter was really pretty. We were going inside early and it worked. When we went away from going inside [we struggled],” Meier said of the team’s play after the break. “As I’m walking into the locker room, I could hear Emese Hof telling her team what we wanted as a staff. We wanted to go inside, but we didn’t want it to affect our flow . . . and we finally got that nice mix. Also, I think our post rebounded really well.”

Kentucky pulled within three in the last period, but could not get any closer, eventually falling by 11 and finishing with a season-low 54 points. The six points Miami conceded in the final session tied for its fewest in a quarter this year, matching the third frame against Vermont.

Redshirt senior guard/forward Shaneese Bailey, who made her first start of the season Sunday, connected on a 3-pointer to beat the shot-clock buzzer and make it 59-52 with 1:01 to go, essentially sealing the victory.

Freshman guard Endia Banks led Miami with 13 points and added a career-high eight assists, the most by a Hurricane since Adrienne Motley had eight in an overtime win at No. 9/10 Ohio State on Dec. 1, 2016.

Davenport posted with 12 points and a co-game-high 12 rebounds, finishing 5-of-7 from the floor. She logged three assists for the first time as a collegian and added a season-best three blocks in a career-high 35 minutes.

Miami concluded the contest with a 38-22 edge in paint points and a 14-2 advantage in fast-break points.

The Hurricanes will conclude a seven-game homestand Friday at 7 p.m., when they take on Alabama State.

MIAMI HURRICANES POSTGAME NOTES
– The Hurricanes improved to 2-6 all-time against the Wildcats, tallying their first win in the series since Dec. 19, 2000, which was the last time the sides met in Coral Gables.
– Davenport now has five double-doubles in her career and has grabbed double-digit rebounds in four of nine games this season.
– Miami’s 28 points in the third quarter were its second-most in a period this season, trailing on the 29 it scored in the third versus Maine (11/24/17).
– The third quarter, in which Miami had a 28-18 scoring margin, marked the seventh time this season—fifth different team—the Hurricanes have outscored their opponent by at least 10 in a single frame.
– Bailey surpassed 200 made free throws in her collegiate career.