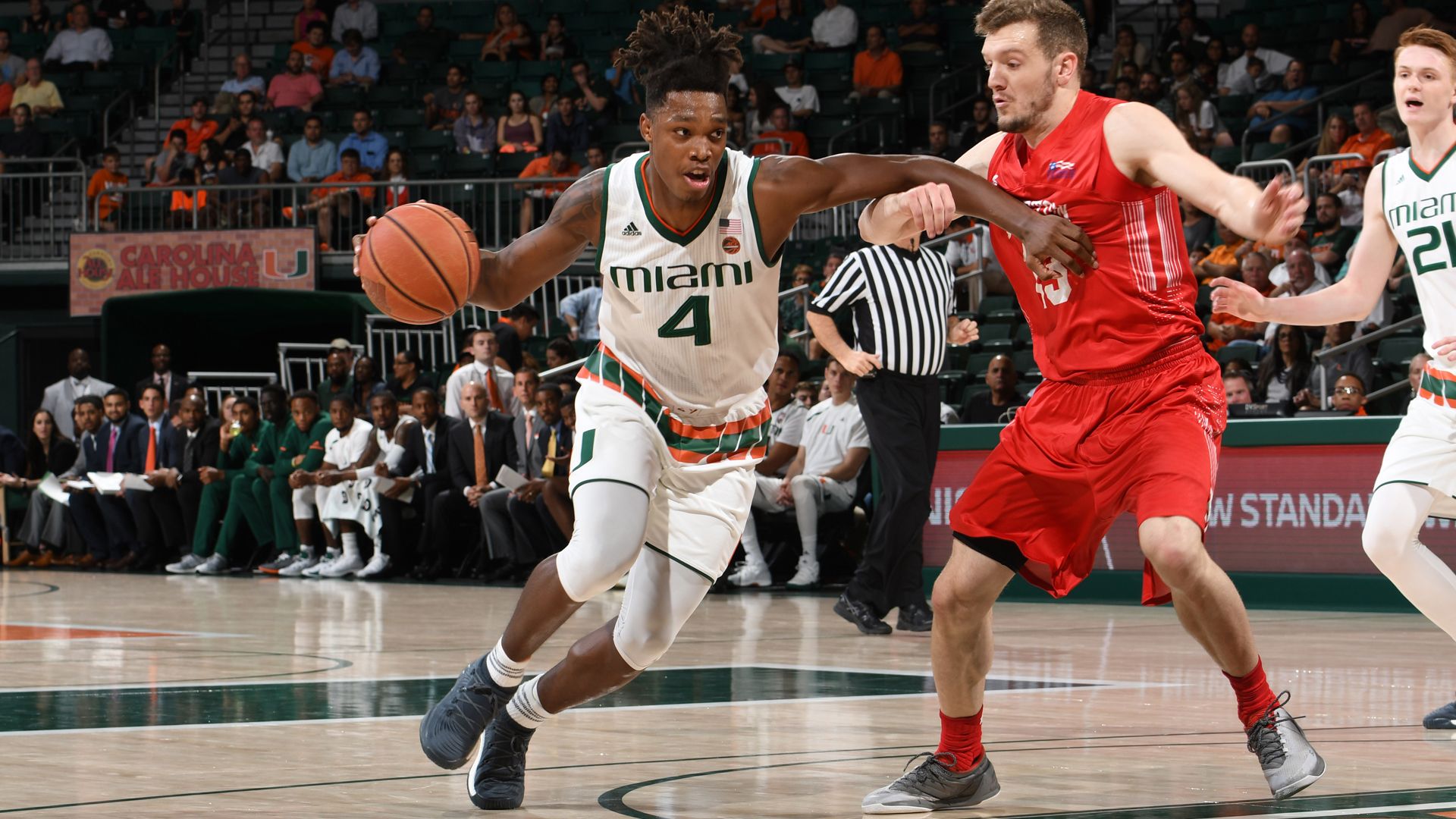 CORAL GABLES, Fla. – In the final home game of the 2017 calendar year, freshman Lonnie Walker IV gave Hurricane fans a taste of what they can expect in 2018 at the Watsco Center.

The Reading, Pa., native exploded for a career-high 26 points to propel the No. 10/11 University of Miami men’s basketball team to a 69-54 win over Boston University Tuesday night.

With the win, the Hurricanes remained undefeated and moved to 8-0 on the year. The win also marked the second time in the Jim Larrañaga era in which Miami has opened the year 8-0.

“I was a little concerned at halftime that Boston University seemed to be quicker to the ball, quicker to the rebounds,” Miami head coach Jim Larrañaga said. “They just played with a little more energy and execution than we did. We didn’t really make any adjustments at halftime, we just told them they needed to play harder and better, execute better and I thought we did. Obviously, Lonnie Walker had an excellent breakout game – 26 points, seven rebounds, a couple of assists; DJ Vasiljevic shot the ball well again and I thought in the second half our defense was much improved.”

Eighteen of Walker’s 26 points came in the second half. Walker connected on 6-of-10 shots from the field, including 4-of-5 from 3-point range in the final 20 minutes.

Walker finished the game by going 9-of-15 from the field. He also pulled down a game and career-high seven rebounds.

Miami jumped out to the early lead, as it opened up a seven-point advantage (17-10) at the 13:57 mark of the first half. Miami never trailed in the first half, but the Terriers would stay within striking distance for remainder of the first half and would later go on to tie the score at 30 heading into the locker room.

Vasiljevic led the Hurricanes scoring in the first half with 10 points, connecting on 4-of-7 shots from the floor. Walker also chipped in with eight points in the opening 20 minutes.

Coming out of the locker room, Miami outscored BU 16-6 over the course of the first five minutes of the second half to open up its first double-digit lead of the night at 46-36. Ten of the Hurricanes’ first 16 points of the second half came from Walker.

Defensively, Miami held the Terriers to their lowest scoring output of the season. Miami’s defense was especially dominant in the second half, limiting BU to just 24 points on 9-of-31 shooting (29 percent). The Hurricanes also held BU scoreless during the final five minutes of the game.

The Hurricanes also held a 35-32 advantage in total rebounds.

Miami returns to action on Saturday (Dec. 16), as it travels to George Washington. Game time is set for Noon and the contest can be seen on CBS College Sports Network.

• Miami has won 16 straight non-conference home games, dating to November 2015, and has captured 32 of its last 34 home contests.

• Miami has held five of eight opponents this season to fewer than 60 points.

• The Hurricanes scored double-digit 3-pointers for third-straight game (10 at Minnesota, 14 against Princeton), racking up 11 against the Terriers.

• The Hurricanes committed a season-high 15 turnovers.

• Boston University became the first visiting team to score as many as 30 points in the first half at the Watsco Center in the 2017-18 season.

• Sophomore guard Bruce Brown Jr. missed his first game since arriving at Miami because of a left-hand injury. Brown also will miss the George Washington game (Dec. 16), but is expected to be back for the Hurricanes’ trip to Hawai’i for the Diamond Head Classic (Dec. 22-25).

• In place of Brown, freshman guard Lonnie Walker IV made his first career start and scored a career-high 26 points (previously 12), the third-most by a freshman Hurricane in the ACC era.

• Walker finished the game with a career-high five 3-pointers (four in the second half). He also had a career-high seven rebounds while playing 28 minutes.

• Walker scored eight straight Miami points in a span of 2:33 early in the first half.

• Dejan “DJ” Vasiljevic was the only player on the court to go into halftime in double digits after scoring 10 points in the opening half (4-7 FG, 2-4 3-FG). He finished with 15, his third straight game in double figures.