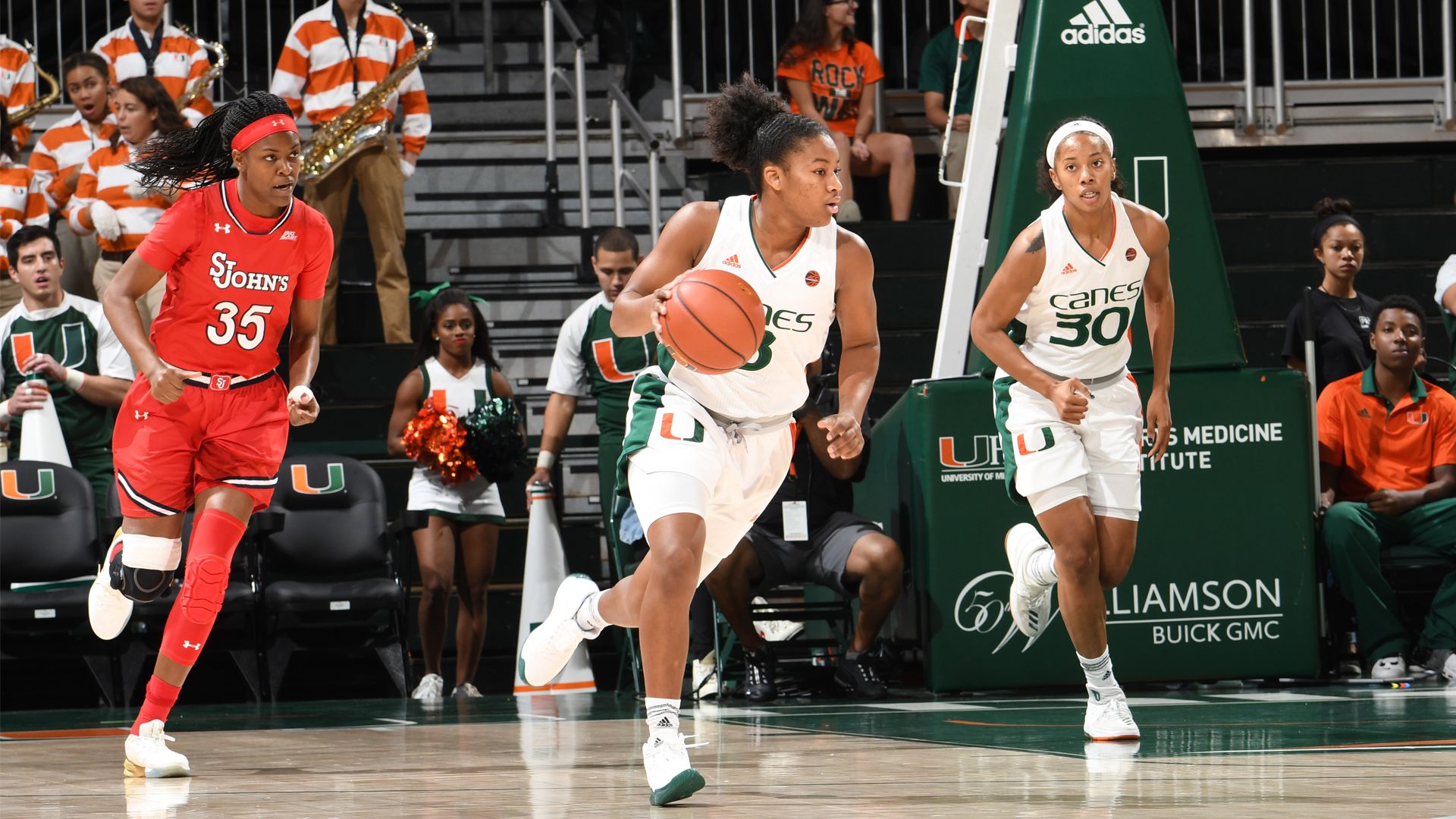 The Red Storm had five players finish with 12-plus points and shot 42.1 percent from beyond the arc in the victory.

St. John’s (5-2) pushed its lead to as many as 11 points in the second quarter, but freshman guard Kelsey Marshall countered with back-to-back 3-pointers. The Red Storm’s margin stood at seven, 35-28, at the break.

The Hurricanes started the third frame on a 10-3 run in the first 3:05, including scoring seven straight points in a span of 93 seconds, to even the score at 38.

The Red Storm outscored Miami by 11 the rest of the way to take a 57-46 advantage into the last session. St. John’s shot 5-of-6 from beyond the arc in the third period.

Miami trimmed its deficit to five during the fourth quarter, but St. John’s answered with a 9-0 run to go ahead, 68-54, with 3:50 on the clock. The Hurricanes were unable to get any closer than nine down the stretch.

Freshman guard Endia Banks led the Hurricanes with 10 points in the defeat, while four other Miami players had at least seven points.

Qadashah Hoppie led all players with 16 points and 17 rebounds, the latter the most by a Miami opponent since Florida State’s Adut Bulgak had the same number on Feb. 8, 2015.

Miami caps a four-game stretch against major conference opponents Dec. 10 at 1 p.m., when it faces No. 20/22 Kentucky at the Watsco Center.

MIAMI HURRICANES POSTGAME NOTES
– Miami dropped to 19-7 all-time against St. John’s, falling for just the second time in the last 13 outings including the first in the last 10.
– The Hurricanes’ nine-game winning streak versus the Red Storm was tied for their sixth-longest against any opponent and was their fourth-longest active mark.
– Miami shot a season-best 80.0 percent from the free throw line, finishing 16-of-20 with six players making at least one shot from the stripe without a miss.
– This marked the first time in 2017-18 the Hurricanes have had five opposing players score double-digit points and the first time since seventh-ranked Florida State did so on Dec. 29, 2016.
– Redshirt senior guard/forward Shaneese Bailey made her 100th appearance and eclipsed 800 points as a collegian, sophomore center Serena-Lynn Geldof surpassed 50 points at Miami, freshman guard Kelsey Marshall reached 50 points in her young career, junior forward/center Emese Hof moved past 1,250 minutes played as a collegian and freshman guard Taylor Mason reached 100 minutes played at Miami.