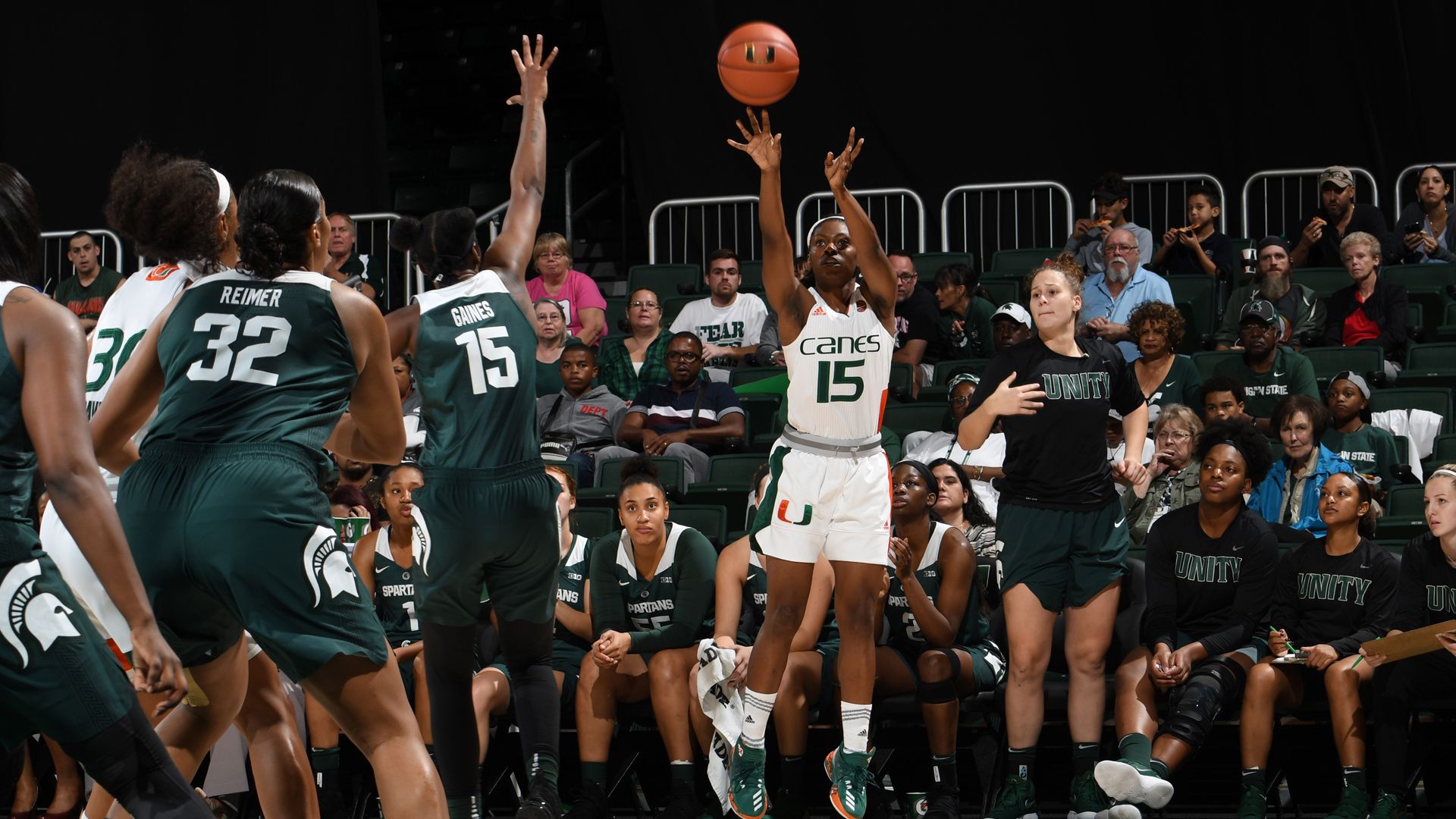 CORAL GABLES, Fla. – For the fourth consecutive year, the University of Miami women’s basketball team picked up a victory in the Big Ten/ACC Challenge.

“I have a ton of respect for Michigan State’s program. I love Suzy Merchant, the coach, and love their players,” Miami head coach Katie Meier said. “They have length, size, athleticism, the ability to score and somehow we kind of splintered them a little bit tonight with our defensive energy. We made a lot of mistakes on the offensive end, but our defense held, so were able to come out with the win.”

After a back-and-forth first period in which neither team led by greater than four points, the Hurricanes grabbed a narrow 19-18 edge.

Aided by strong play off the bench from senior guard Neydja Petithomme, Miami upped its cushion to six, 34-28, at halftime. The Hurricanes held Michigan State (4-2) to 11-of-32 shooting (34.4 percent) in the opening 20 minutes.

Miami opened the third period on a 9-4 run and went on to stretch its advantage to as many as 12. That would prove to be its lead entering the last frame, with the score sitting at 51-39.

The Hurricanes continued to impress on both ends in the fourth session and took their largest lead, 16 points, in the final minute. The Spartans connected on a pair of 3-pointers in the last 40 seconds to make it a 10-point final margin.

Senior forward/center Erykah Davenport paced Miami with 12 points, while freshman guard Kelsey Marshall and Endia Banks finished with 11 and 10, respectively, for the second straight game. Junior forward/center Emese Hof became the first Hurricane other than Davenport to lead Miami in rebounding this season, notching a game- and season-high nine.

Petithomme turned in her best game at Miami, totaling nine points, five assists and zero turnovers in 21 minutes of action. She also made all four of her free throws and hit a 3-pointer.

“If we stretched out their three-quarter-court press, then we needed a courageous guard who could get in the gaps and really draw and distribute,” Meier said. “That’s what Neydja is very good at, so her teammates had to stretch out the press a little bit and had to create the gaps for her to attack.”

Prior to Thursday, Michigan State had scored 60-plus points in 20 consecutive games and was last held under that mark on Jan. 14, 2017 at Rutgers.

“We changed our schemes, our ball-screen defense and we kept changing it,” Meier said, also noting the impact Hof had her season-high 26 minutes. “We weren’t just stealing the ball from them, but we were creating a lot of turnovers on travels and such when we when we would change our ball-screen schemes.”

The Hurricanes return to the court Sunday at 1 p.m., when they host St. John’s at the Watsco Center in the fifth of a seven-game homestand.

MIAMI HURRICANES POSTGAME NOTES
– The Hurricanes upped their all-time record against Michigan State to 3-2, including 2-0 in Big Ten/ACC Challenge competition.
– Miami now has a 6-3 record in Big Ten/ACC Challenge games, including a 6-1 ledger over the past seven years and a 4-2 mark at home.
– Combined with the Hurricanes defeating Minnesota in men’s basketball last night, Miami is the lone school with a perfect 8-0 record across both genders in the Challenge over the past four seasons.
– After scoring 108 points in the first six games of her career, freshman guard Mykea Gray was held to single digits for the first time as a collegian.
– Banks topped 50 points in her career, Petithomme surpassed both 200 points and 50 free throws attempted as a collegian, freshman guard Kelsey Marshall eclipsed 100 minutes played at Miami, senior forward Keyanna Harris moved past 100 steals in her career and sophomore guard/forward Sarah Mortensen surpassed 100 points as a Hurricane.