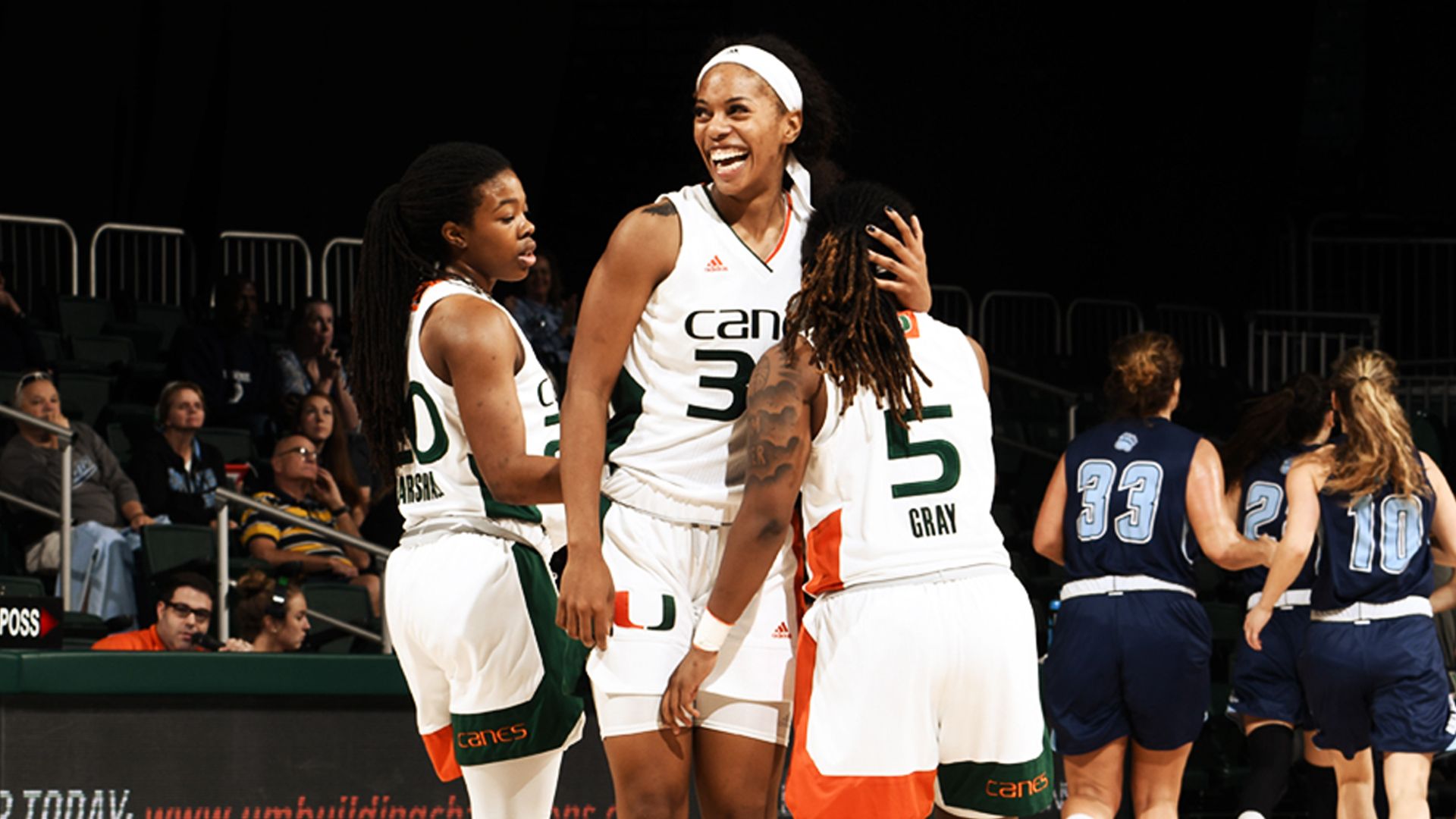 CORAL GABLES, Fla. – The University of Miami women’s basketball team registered an 80-70 victory over Maine Friday afternoon at the Watsco Center in its first game of the Miami Thanksgiving Tournament.

Senior Erykah Davenport tallied her second straight double-double, becoming the first Hurricane to do so in over four years, and scored a career-high 20 points to help Miami (4-1) withstand the Black Bears’ long-range shooting.

“I’m glad we finally put some points on the board. I think it’s pretty special to go up 20 against a very good Maine team,” Miami head coach Katie Meier said. “We didn’t close the door; that’s going to happen and we will have to deal with it, but I thought it was a job well done. There were some beautiful moments of basketball in this game.”

The Hurricanes scored eight consecutive points, including six by sophomore center Serena-Lynn Geldof, late in the first period to take a 13-point lead. A buzzer-beating 3-pointer by Maine made it a 26-16 edge through 10 minutes.

Maine (3-2) outscored Miami by 10 in the second period to even the score at 37 entering the locker room. The Black Bears shot 7-of-12 (58.3 percent) from 3-point range in the first half, led by sophomore guard Blanca Millan, who had 15 points and went 3-of-4 from outside the arc in the opening 20 minutes.

The Hurricanes dominated the third session, more than doubling Maine’s output, to grab a 15-point advantage, 66-51, with one frame to go.

Miami pushed its lead up to 20 in the last quarter before Maine pulled within 10, but the Black Bears could not get any closer than that. The Hurricanes led for all but 38 seconds of action and did not trail at any point.

In addition to leading Miami in scoring, Davenport, a forward/center from Decatur, Ga., finished with a game-high 11 rebounds and set career highs in free throws made (eight) and attempted (10), plus field goal attempts (11). She also tied her career high in field goals made (six), as well as set season highs in minutes (32), assists (two) and steals (two).

“She just cares so much. All she talks about is Miami,” Meier said of Davenport. “It’s not a coincidence that players who care about Miami . . . and see [what the Hurricanes] need, those players end up playing a ton of minutes and with great stats.”

Millan led all scorers with 21 points for the Black bears, while sophomore guard Julie Brosseau added 20 in the defeat.

The Hurricanes will take on No. 15/15 Maryland Sunday at noon in their Miami Thanksgiving Tournament finale. The last game of the weekend will feature Kennesaw State and Maine at 2 p.m.

MIAMI HURRICANES POSTGAME NOTES
– The Hurricanes are now 3-2 all-time against the Black Bears and have defeated Maine in consecutive seasons.
– Prior to Davenport, the last Miami player to log a double-double in consecutive games was Shawnice “Pepper” Wilson on March 8, 2013 against Florida State and March 24, 2013 at Iowa. Davenport is also the first Hurricane with 30 rebounds in a two-game span since Wilson had 33 in those two and the first with back-to-back double-digit rebound games since Keyona Hayes Jan. 12, 2014 at Virginia Tech and Jan. 16, 2014 at Boston College.
– After scoring 16-plus points and/or making six-plus free throws in a game just once through the first 102 outings of her career, Davenport has now done both in back-to-back contests.
– Gray has scored in double figures in each of the first five games of her college career and now has 87 points on the season, good for an average of 17.4 per game.
– Junior forward/center Emese Hof moved past 500 points in her career, Harris surpassed 300 points as a collegian and Davenport eclipsed 600 points, 500 rebounds and 100 made free throws at Miami.