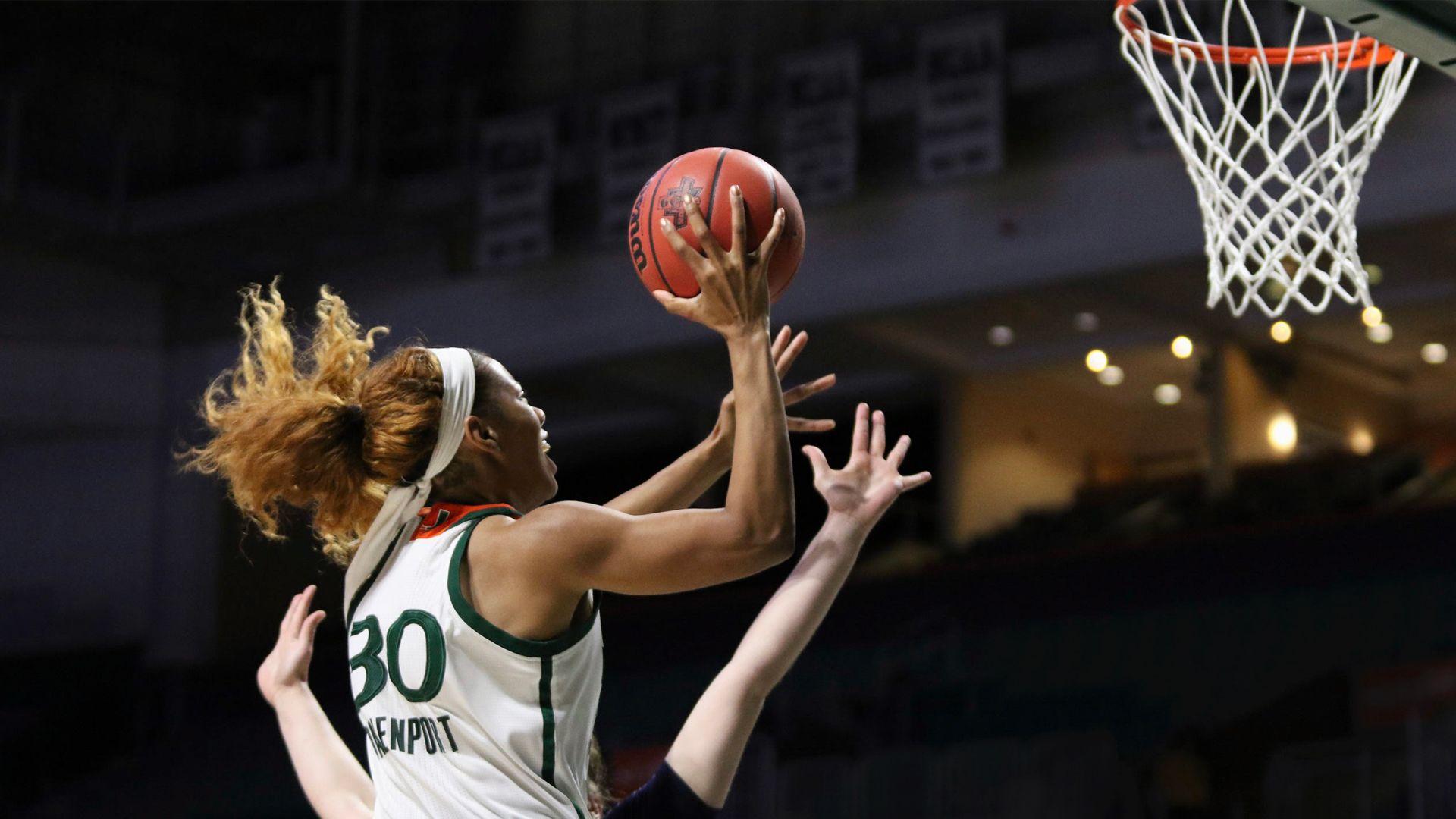 The forward/center from Decatur, Ga., had 16 points and 19 rebounds to help Miami (3-1) get back to its winning ways on elementary school day. Her 16 points tied a career high and her 19 boards set a new career mark.

“She set the tone for us. She’s tough and she’s somebody that I think is one of the most improved players who has ever come here,” Miami head coach Katie Meier said of Davenport. “We knew coming in that we needed to beat them on the glass. They didn’t have a ton of size, so Erykah was a large part of the game plan. So was Serena-Lynn [Geldof], to be honest, but Erykah was playing so well, I didn’t want to take her off the court.”

Davenport scored the Hurricanes’ first six points of the second session and the Hurricanes pushed their lead to 16 three times during the frame. That proved to be the margin at halftime, as Miami carried a 33-17 edge into the locker room.

The Privateers’ first-half total marked the fewest points the Hurricanes conceded before the break since allowing just 11 to Duke on Feb. 7, 2016. It was also the lowest total in any half by a Miami opponent since Coppin State had 12 in the second half on Dec. 19, 2016.

With 6:28 left in the third period, Davenport clinched the third double-double of her career. Senior guard Randi Brown scored 16 of New Orleans’ 19 points in the frame, as Miami upped its cushion by just a point, taking a 53-36 advantage into the fourth quarter.

In the last frame, the Hurricanes posted their highest point total and scoring margin in any period, 23 and plus-13, respectively. They also held Brown scoreless in the final 10 minutes to earn their first 30-point victory since an 82-50 triumph at Pittsburgh on Jan. 2, 2017.

All 10 Hurricanes who dressed for Tuesday’s game got in the scoring column and nine made at least one field goal.

“The roles are changing. People are eager to fill whatever role we can give them,” Meier said. I thought Sarah Mortensen really had a really smooth game for us. When we watch the film, I think we are going to like the 3-pointers we took, but you have to have a rhythm before they start going in.”

Davenport’s 19 boards tied for the ninth-most in a game by a Hurricane and marked just the 18th time in program history a player has reached that number. No Miami player has recorded more rebounds in a contest since Tamara James had 21 against USF on Nov. 22, 2002.

Along with her career numbers in points and rebounds, Davenport also tied her career high in free throws made (six) and set a new top mark in attempts (nine).

Redshirt senior guard/forward Shaneese Bailey totaled 14 points and seven rebounds. The former is her second-most as a Hurricane and the latter is the most she has tallied at Miami.

Freshman guard Mykea Gray posted 13 points, while senior forward Keyanna Harris filled the stat sheet with five rebounds, a career-high six assists and five steals. It is the fourth time the Riviera Beach, Fla., native has recorded five steals, including the second this season, and matched her career-best mark.

Brown, the leading scorer in the Southland Conference, finished with a game-high 26 points on 9-of-18 shooting. Senior guard Kayla Mundy added 10 points for the Privateers.

Miami had a 40-12 edge in paint points, as well as a 26-4 lead in fast-break points and a 37-3 advantage in bench scoring in front of a large crowd of young Miami-Dade County students.

“We walked into our pre-game meal this morning and all the grade school placards were on the chairs,” Meier said. “I said, ‘All these empty seats right now are going to be filled with little kids. People at this University busted their butts trying to get a great event for you, so I want you to have fun with it, but I also want you to be grateful and appreciative of the effort that goes behind it and, of course, of the little eyes that are watching you.’ You can’t be tired when you have 2,000 kids cheering for you.”

The Hurricanes will resume play Friday at 4 p.m., against Maine in the second game of the Miami Thanksgiving Tournament at the Watsco Center. Prior to that contest, Kennesaw State faces Maryland at 2 p.m.

MIAMI HURRICANES POSTGAME NOTES
– This was the Hurricanes’ first meeting with New Orleans in 33 years and they upped their series record to 2-0.
– With 2,005 fans in attendance, this marked the third time in Miami’s last home games the crowd numbered greater than 1,900.
– Davenport entered halftime just two points and one rebound shy of a double-double, already tying for her fifth-most boards in a full game before the second half even began.
– Gray finished with double-digit points for the fourth straight game to open her career and now has 71 points on the season.
– Bailey surpassed 250 free throw attempts as a collegian, Davenport eclipsed 100 free-throw attempts at Miami and sophomore center Serena-Lynn Geldof eclipsed 100 minutes played as a Hurricane.