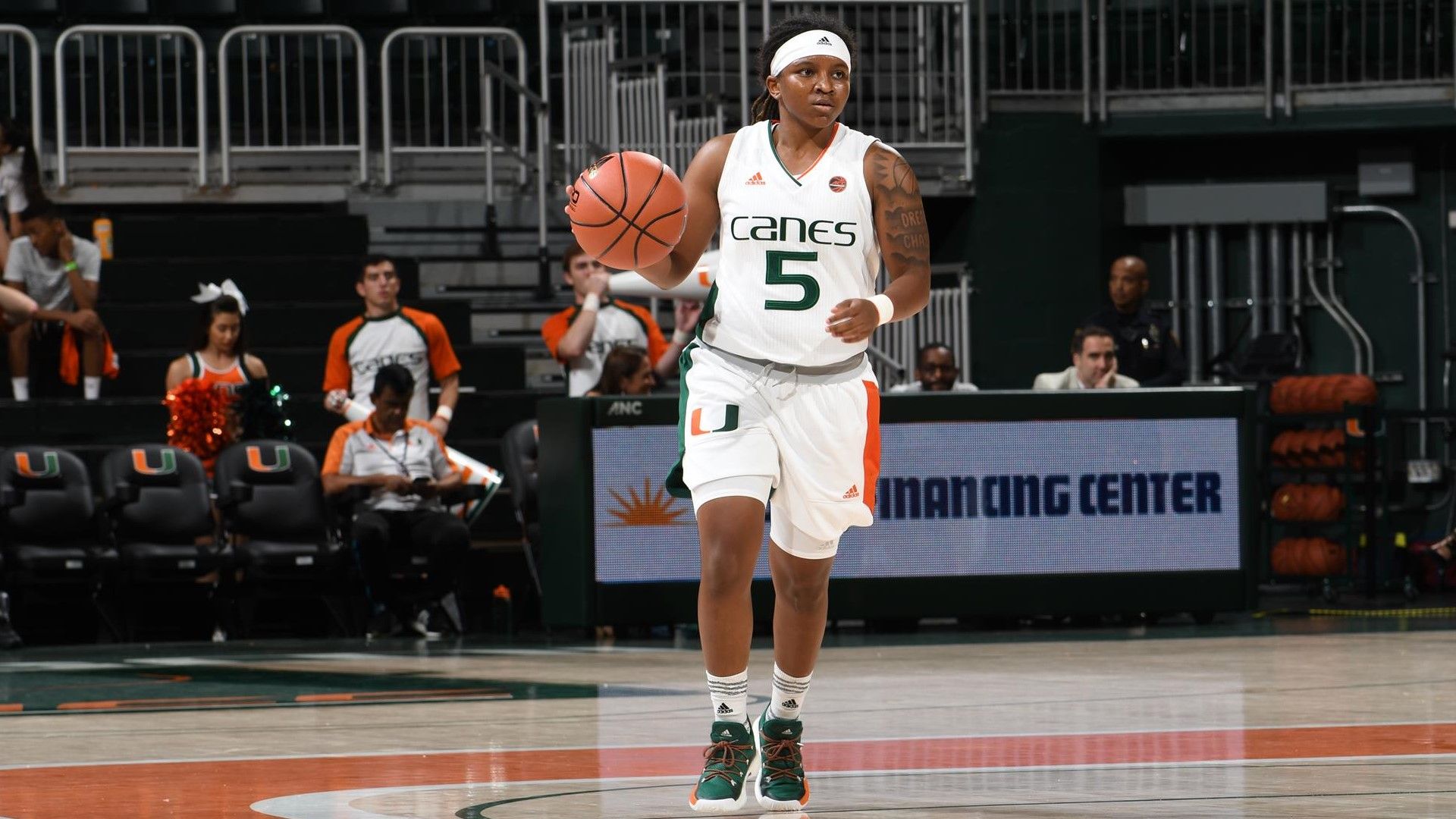 For the second straight game to begin her career, freshman guard Mykea Gray led Miami (2-0) in scoring, finishing with 21 points.

“You’ve got to play clean to play fast and we’re not there yet. I’m happy that we got some different defensive looks thrown at us by Vermont,” Miami head coach Katie Meier said. “I thought they did a nice job in the defensive transition because if you have 15 steals you should have more than 11 fast- break points. I think I have a bunch of kids just kind of staring, wondering [what their job is] . . . and I’m having to coach too much. It’s hard to have flow if they need me to coach through every pass. We’ll get there.”

Senior forward Keyanna Harris scored six points, including the team’s first four, in the opening period to help the Hurricanes take a 15-13 edge after 10 minutes of action.

After being held scoreless in the first frame, Gray scored nine points in the second, all in a span of three minutes and 14 seconds. Miami, ranked No. 24 in the USA TODAY Coaches Poll, closed the half on a 6-0 run to take a 37-26 lead at the break.

Harris scored all 10 of her points in the first half, marking the seventh time in her career she reached double digits in a game.

After keeping Vermont scoreless for the last 2:12 of the second period, the Hurricanes also did so for the first 8:32 of the third, making it a stretch of 10:40. The stellar defense helped Miami build a 30-point lead as it greater than doubled up the Catamounts, 56-26.

“It was just a point in the second quarter where, towards the end of the half, we were like, ‘We’ve got to go into the half with a better lead,'” Meier said. “Then, at the start of the third, the starters did a fantastic job. We did poorly Friday night at the start of the third, so that was a focus point in our preparation; just don’t let them go on a scoring run here. They didn’t score at all. That was a great response.”

Vermont closed the third session on a 6-1 run and Miami’s advantage sat at 25, 57-32, entering the final 10 minutes of the contest.

The Hurricanes’ edge did not drop below 20 in the fourth period and they left the court with a 24-point victory to double their season win total.

Senior forward/center Erykah Davenport logged 10 points and a game-high six rebounds. Harris tallied five steals, becoming the first Hurricane to reach that total since Davenport did so against Clemson on Feb. 12, 2017. It is the third time the Riviera Beach, Fla., native has totaled five steals in a game.

The Hurricanes forced 30 turnovers, did not allow a single fast-break point and had a 32-10 advantage in points off turnovers.

Miami will be back in action Sunday for its first road game of the season, as it takes on Colorado at 3 p.m. ET in Boulder, Colo.

MIAMI HURRICANES POSTGAME NOTES
– This was the first meeting between Miami and Vermont. The Catamounts are the first of four teams the Hurricanes play this season they never before faced.
– After missing Friday’s season opener due to a family matter, freshman guard Kelsey Marshall made her collegiate debut against Vermont and finished with five points and three assists.
– Senior guard Neydja Petithomme scored six points in 13 minutes, both her highest totals as a Hurricane, and made a pair of 3-pointers in the game after not connecting on one previously in her Miami career.
– Gray is the first Miami player to score 20-plus points in consecutive games since Adrienne Motley did so last season on Feb. 19 at No. 13/14 Duke and Feb. 23 at Virginia Tech. She is the first player have 20-plus in back-to-back home games since Motley did so on Nov. 21, 2014 against North Florida and Nov. 25, 2014 versus Arizona State.
– Sophomore guard/forward Sarah Mortensen eclipsed 250 minutes played as a Hurricane.