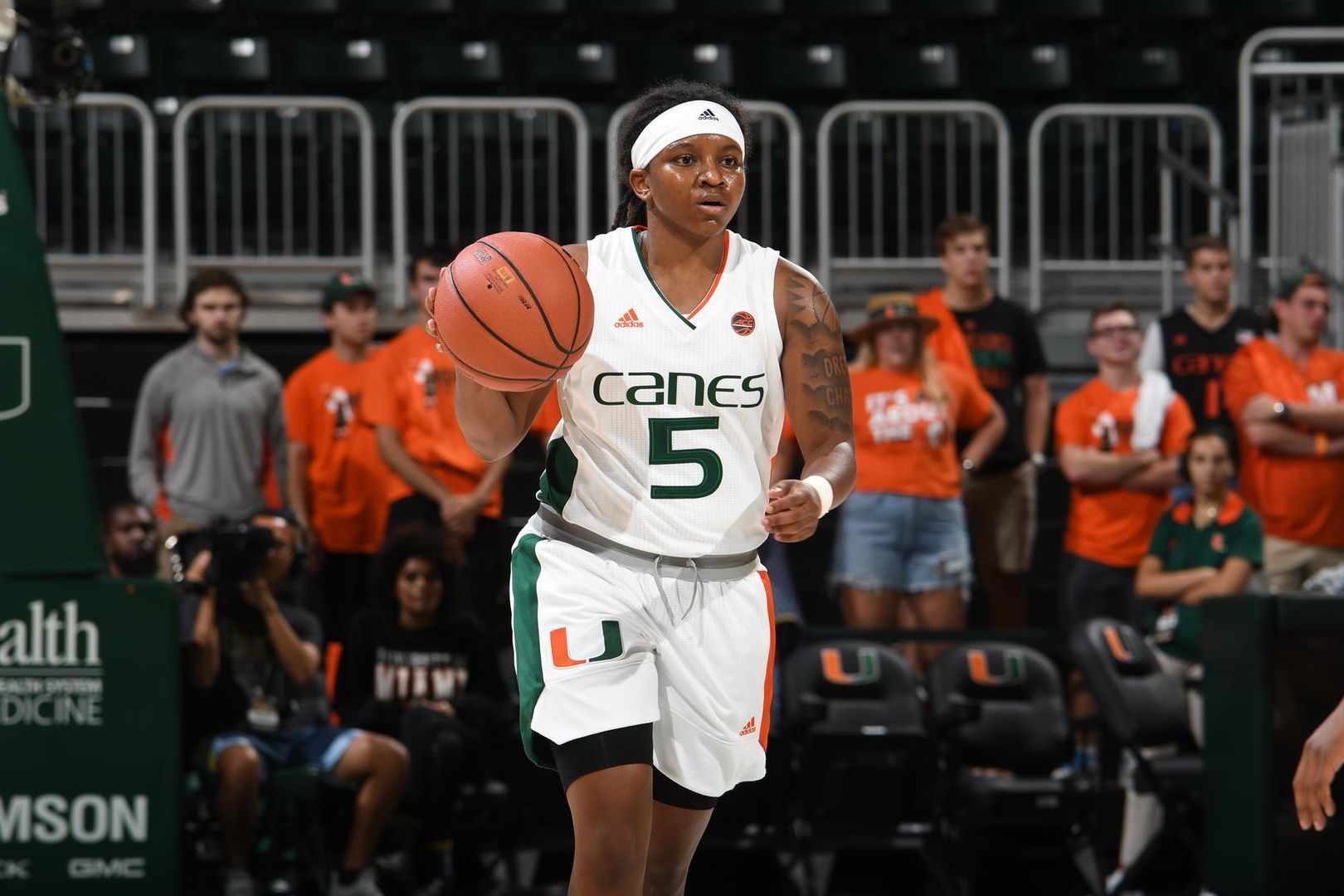 Gray poured in a game-high 27 points and co-led all players with five assists to help Miami (1-0) start the season with a victory over their crosstown foe.

“Well, honestly I think her legs kind of gave at the end. She hasn’t played 35 minutes in practice,” Miami head coach Katie Meier said of Gray with a laugh. “She was scoring, so we were calling for her. I like this team, we’ll take whatever the other team gives us and they had a hard time staying in front of her. She was pretty fantastic tonight.”

One of two freshmen to start, Gray scored the first six points for the Hurricanes and tallied 11 in the opening period as a whole. Both teams scored 19 points in the first 10 minutes, with FIU (0-1) connecting on both of its 3-point attempts.

Gray added eight points in the second session, including a 3-pointer and an and-one on consecutive possessions late in the frame, as Miami took a 38-36 lead into the locker room after a first half that included 12 lead changes.

The 19 first-half points by Gray tied for the second-most in a half by a Hurricane since the start of the 2014-15 season and tied for the most in the opening 20 minutes.

The Panthers used a 9-0 run early in the third period to take a seven-point advantage and took a six-point edge, 61-55, into the fourth period.

After Miami, ranked No. 24 in the USA TODAY Coaches Poll, went on an 8-3 run to even the score at 66 with 4:46 to go, FIU redshirt junior Kiandre’a Pound answered with a 3-pointer to put the Panthers back in front 31 seconds later.

From there, the Hurricanes took over. Miami scored 11 consecutive points to close the game and held FIU scoreless in the final 4:15 of action.

A layup with 3:43 remaining by guard Endia Banks, the Hurricanes’ other freshman starter, gave Miami a 70-69 lead it would not relinquish.

Gray’s 27 points were more than any Hurricane tallied in a game each of the past two seasons and were the most since Adrienne Motley had 30 against Washington on March 20, 2015, in the first round of the NCAA Tournament. She scored 24 of Miami’s first 45 points, connecting on eight of her first 10 attempts.

Banks finished with 15 points, eight rebounds and four assists, while shooting 7-of-13 in her collegiate debut. Senior forward/center Erykah Davenport came up just shy of a double-double, capping her evening with 11 points and nine boards, as well as tying a career high with eight free throw attempts.

Junior guard Kristian Hudson paced FIU with 21 points, but Miami held her to 6-of-16 shooting. Pound posted a double-double with 13 points and 11 rebounds for the visitors.

Miami dominated inside throughout the contest, finishing with a 19-1 edge in second-chance points and a 40-20 advantage in paint points. The Hurricanes also outrebounded FIU, 48-31, including 17-4 on the offensive end.

Meier’s team also overcame a blistering 7-of-12 (58 percent) shooting display from 3-point range by the Panthers.

“I said just this morning, we could use another week of practice because we’re just still a little rusty,” Meier said of basketball season starting back up. “I have to be patient with this team, but I have to make sure they play hard. There is doubt, people are uncomfortable and they all have different roles that they never had before. There’s a lot to put together, but I like our talent and I know that we’re going to be fine.”

The Hurricanes return to the court Sunday when they host Vermont at 2 p.m., in the front end of a doubleheader with the Miami men’s basketball team at the Watsco Center.