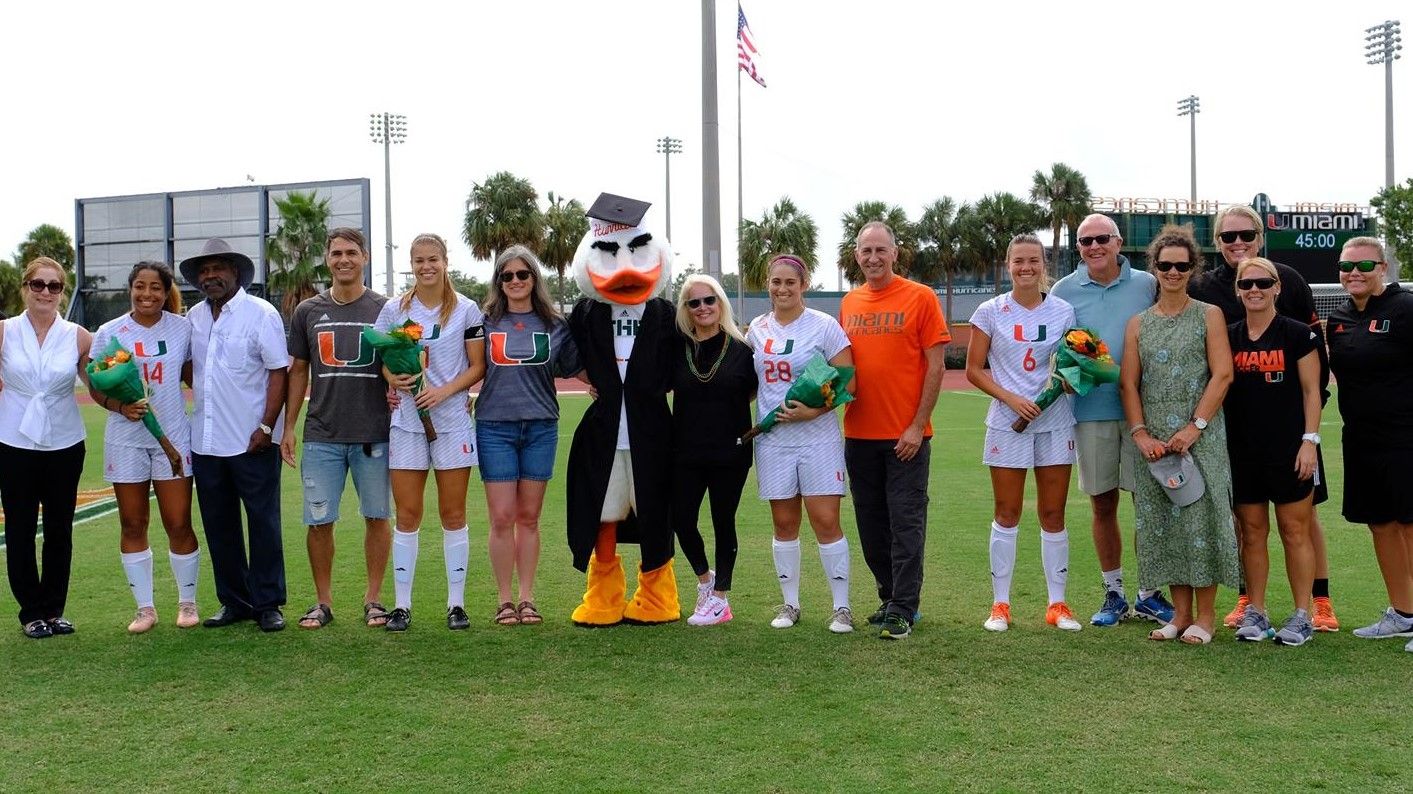 CORAL GABLES, Fla. – The University of Miami soccer team dropped a hard-fought 2-1 decision to Notre Dame Sunday afternoon in its last home outing of the season.

The match was the final one at Cobb Stadium for seniors Ronnie Johnson, Grace Rapp, Danielle Savage and Charlsey Zyne, all of whom were honored in a pregame ceremony.

“Obviously, we’re always very excited about senior day . . . I think we came out [and played well],” Miami head coach Mary-Frances Monroe said. “If we gave a little bit more, I’m sure we could’ve won this game. It was back and forth. I think we had more dangerous shots on goal, but Notre Dame is a fantastic team and we have to put the ball in the back of the net to win these games.”

Notre Dame (9-5-3, 5-3-1 ACC) posted the opening goal on the first shot of the match in the sixth minute. Senior defender Monica Flores crossed the ball into the box, redshirt senior midfielder Sandra Yu headed it across the goalmouth and sophomore forward Natalie Jacobs tapped it in.

The Fighting Irish, receiving votes in the United Soccer Coaches Association poll, doubled their lead in 41st minute when senior forward Meghan Doyle sent in a long-range shot from the right side that hit the far post and bounced in.

Miami (5-10-0, 1-8-0 ACC) pulled one back in the 43rd minute on a beautiful corner kick by junior midfielder Jamie Brunworth that bent past Notre Dame senior goalkeeper Lexi Nicholas and into the far side netting for a goal.

“Jamie served an amazing ball in and we’re lucky it went in the back of the net,” Monroe said of the Hurricanes’ goal.

The first-half offensive numbers were quite similar for the two sides entering the intermission. Miami held a 3-2 edge in shots on goal, while Notre Dame led, 7-5, in overall shot attempts. Both team also had a pair of corner kicks in the opening 45 minutes.

Redshirt junior goalkeeper Phallon Tullis-Joyce made all five of her saves in a span of just over seven minutes early in the second half to keep the Hurricanes within a goal. The bevvy of stops extended her streak of matches with five-plus saves to nine in a row.

The Hurricanes nearly evened the score in the 71st minute, but Nicholas made an impressive, leaping stop on a shot inside the box by sophomore midfielder Kristina Fisher.

Despite creating several quality chances throughout the second half, Miami was unable to come up with an equalizing goal, dropping the 2-1 decision. It marked just the second time in 2017 the Hurricanes were on the short end of a match they scored in.

Johnson, a forward, posted one shot in the match to give her 149 in her career, tying Lauren Singer (2007-10) for third all-time at Miami. Zyne, normally a goalkeeper, logged the first action of her career, earning the start in the midfield.

Savage, a defender, recorded her second straight start and played a career-high 74 minutes. Rapp, a forward/midfielder, went the distance for the 11th time this season, including the sixth in a row.

“They put a lot of blood, sweat and tears into the program and into helping our program [move towards] where we want it to be,” Monroe said of Miami’s seniors. “I think, as our future grows, it’s just going to get better and better.”

The Hurricanes will conclude their 2017 campaign Thursday at 7 p.m., against Wake Forest at W. Dennie Spry Stadium in Winston-Salem, N.C.