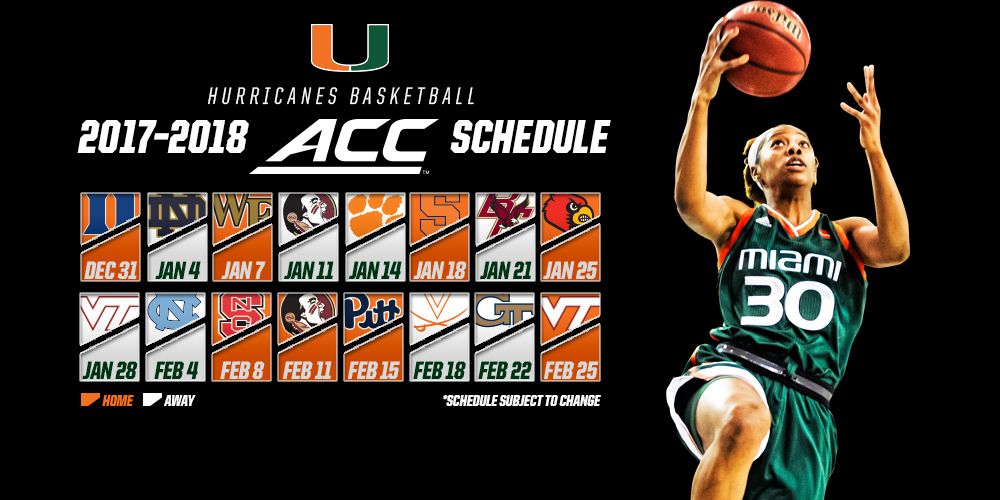 Miami, coming off a 24-9 (10-6) campaign last year, has one contest set to be on ESPN2 and five others slated for RSN. All 16 of the Hurricanes’ conference games will be broadcast live.

Seven of Miami’s conference matchups come against teams that finished the 2016-17 season ranked in the USA TODAY Coaches Poll and five of those games will take place at the Watsco Center.

“The ACC is the premier conference in the country and we look forward to facing yet another challenging league schedule this season,” Miami head coach Katie Meier said. “We are thrilled to have so many talented teams coming to the Watsco Center and we are excited to have our full slate of games televised.”

The Hurricanes start the ACC schedule Dec. 31 with a 12:30 p.m., home game against Duke on RSN. The Blue Devils are No. 12 in ESPN’s Way-Too-Early Top 25 for the upcoming season.

The Hurricanes are back on RSN when they play at Florida State (Jan. 11, 7 p.m.) in the first of two meetings with a Seminole team ranked No. 25 on ESPN’s list. Miami follows that up with another road game, this one at Clemson (Jan. 14, 2 p.m.).

In the second of three consecutive home games, Meier’s team hosts Florida State (Feb. 11, 4 p.m.) on ESPN2. The homestand is then capped against Pittsburgh (Feb. 15 7 p.m.).

Finally, the Hurricanes host Virginia Tech (Feb. 25, 4 p.m.) on senior day at the Watsco Center in the last home game for five players.

“The quality of this conference is a difficult task for all 16 teams, but is also a superb opportunity,” Meier said. “It will be exciting both for us and our great fans to see our talented freshman class mesh with our many returnees against some of the best teams in the country.”

Meier and the Hurricanes begin the regular season Nov. 10 with a home meeting against FIU, the first of 13 non-conference outings. To purchase 2017-18 season tickets, which start at $75, click HERE.