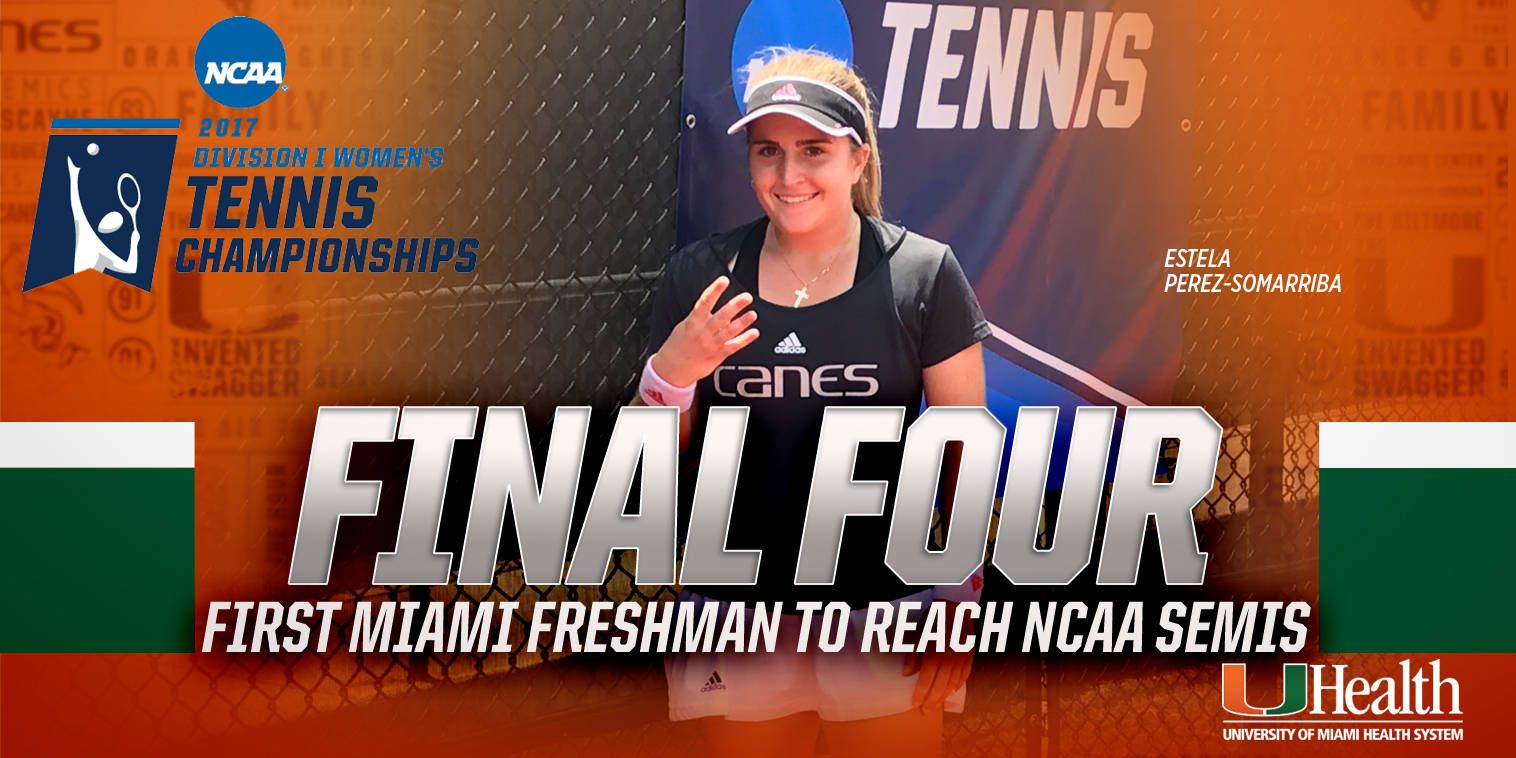 With a 6-4, 6-3 victory over No. 26 Kate Fahey of Michigan, No. 40 Perez-Somarriba became the first freshman in the program’s rich history to make the Final Four of the NCAA Singles Championship.

The lone freshman and only ACC player left in the field, Perez-Somarriba’s triumph at the Dan Magill Tennis Complex marked the ninth time a Hurricane has won an NCAA Elite Eight match.

“One day at a time and great things happen,” Miami head coach Paige Yaroshuk-Tews said of Perez-Somarriba’s historic victory. “She is progressively playing better tennis as this tournament is going on. I think today, believe it or not, was her loosest, calmest match of the tournament and it was definitely her best tennis of the tournament. To see a player peaking, match-by-match, as she goes through them handling the pressures [is very impressive].”

After the first four games of the match were holds, Perez-Somarriba registered the opening break to take her first lead. However, Fahey broke back to even the score at three apiece.

Perez-Somarriba won the next two games to pull within a game of victory, but Fahey held to make it a 5-4 score. When service went back to her, Perez-Somarriba seized her opportunity and closed out the set.

In the second set, Perez-Somarriba won each of the first three games, giving her victories in six games over a span of eight, including four in a row.

Following a medical timeout, Fahey trimmed her deficit to one game. The players then exchanged holds, bringing the score of the set to 5-3.

On her first match point of the day, Perez-Somarriba clinched the Elite Eight triumph with a break, as Fahey sent the Madrid native’s return long.

“When you have to play high-level tennis and beat a kid like that, it says a lot about Estela. Her unforced errors were at a minimum and her first serve percentage was high,” Yaroshuk-Tews said. “She was able to vary the backhand and she was ripping the forehand. Honestly, she is a tough kid to beat when she plays the way she played today. Taking nothing away from Fahey—she is a great competitor, she makes you beat her and today Estela came up with the goods.”

The lone prior Hurricane to reach the NCAA semifinals while unseeded was current associate head coach Laura Vallverdu, who went all the way to the championship match in 2009. She then returned to the Final Four in 2010.

Perez-Somarriba is the eighth Miami player to reach the Final Four of the NCAA Singles Championship, with Vallverdu being the sole two-time semifinalist. Her appearance in the semifinals will be the eighth under Yaroshuk-Tews, including the seventh in the last 11 years.

Miami is the only team in the nation in women’s or men’s tennis to place a player in the Final Four each of the last three years. Perez-Somarriba follows Sinead Lohan (2016) and Stephanie Wagner (2015), with the former being a current teammate and the latter serving as a student assistant coach this season.

Perez-Somarriba will take on the second-highest-ranked opponent of her career Sunday in the Final Four, as she meets sixth-ranked and sixth-seeded Belinda Woolcock of Florida. The start time has not yet been determined.