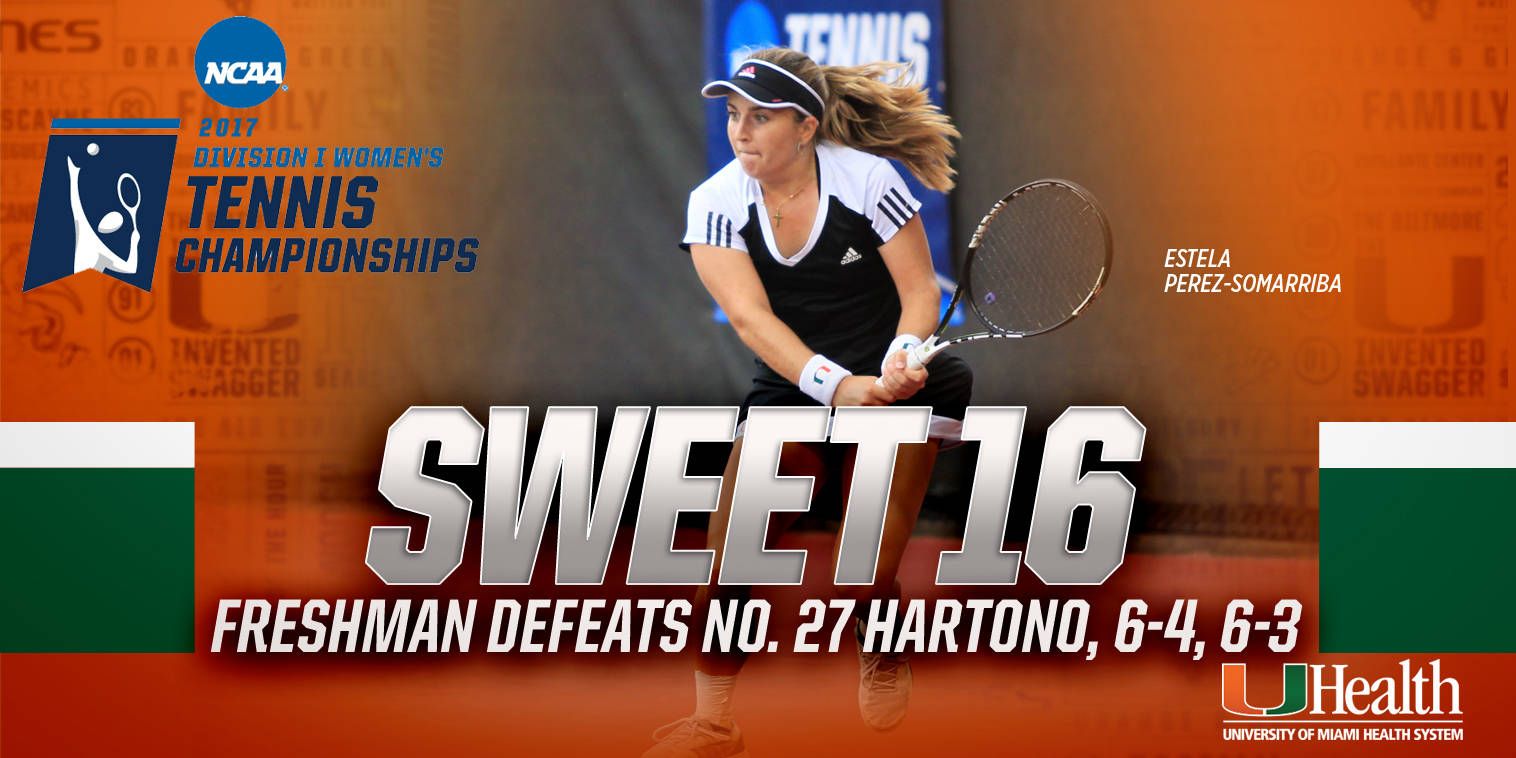 ATHENS, Ga. – For the fifth time in the program’s illustrious history, a freshman on the University of Miami women’s tennis team is headed to the NCAA Singles Championship Sweet 16.

No. 40 Estela Perez-Somarriba took down No. 27 Arianne Hartono of Ole Miss, 6-4, 6-3, Thursday morning at the Dan Magill Tennis Complex. The Madrid native’s victory was her 13th in a row and moved her to 10-1 against ranked opponents this spring, including 4-0 versus top-30 players.

“She played a big hitter, a girl who had the ability to push her around the court and she was able to push back,” Miami head coach Paige Yaroshuk-Tews said. “It was high-quality tennis [with] deep balls and playing the patterns really well on both sides, by both kids. Estela was just able to keep the quality of tennis going a little bit longer in each point.”

After dropping the first two games of the match, Perez-Somarriba won 12 of the final 17 to seal the win. The contest featured a rain delay of approximately one hour just three points into the second set.

After five straight breaks to begin the second set, Perez-Somarriba held and then broke again to surge in front, 5-2. Hartono pulled back to within two games and then fought off one match point, but could not do so the second time, as Perez-Somarriba wrapped up the straight-set triumph.

Perez-Somarriba, who sits at 32-6 in her opening collegiate campaign, was one of six freshmen to advance to the third round. That group also includes North Carolina’s Sara Daavettila, the other representative still remaining from the ACC.

With her victory, Perez-Somarriba becomes the 13th Hurricane to reach the Sweet 16. It is the 23rd overall Sweet 16 appearance in program history, including the 13th in Yaroshuk-Tews’ 16 seasons and the fourth in the past three seasons.

“I feel like we have been saying since the beginning of the season that we’ve got a little superstar in the making,” Yaroshuk-Tews said. “Week in and week out, at every tournament and every weekend, the kid just shows up and is ready to play. We are just really happy with where she is and . . . obviously are happy to get that second match under her belt. That means a lot moving forward.”

Perez-Somarriba joins teammate Sinead Lohan (2015), Lioudmila Skaronskaia (1998), Melissa Mazzotta (1991) and Ronni Reis (1985) as the only Miami freshmen to advance to the Sweet 16. She is the ninth unseeded player in program history to make the third round, including the sixth in the past decade.

Of the 27 Hurricanes who have competed in the NCAA Singles Championship at least once, Perez-Somarriba is already one of 14 to record multiple victories.

In addition, Perez-Somarriba gives Miami its 64th all-time ITA All-America distinction. Of those, 25 have come under Yaroshuk-Tews’ watch, split among 15 players.

Perez-Somarriba will face her third straight SEC opponent Friday in the Sweet 16 when she takes on a fellow freshman, No. 47 Mia Horvit of South Carolina, at noon.