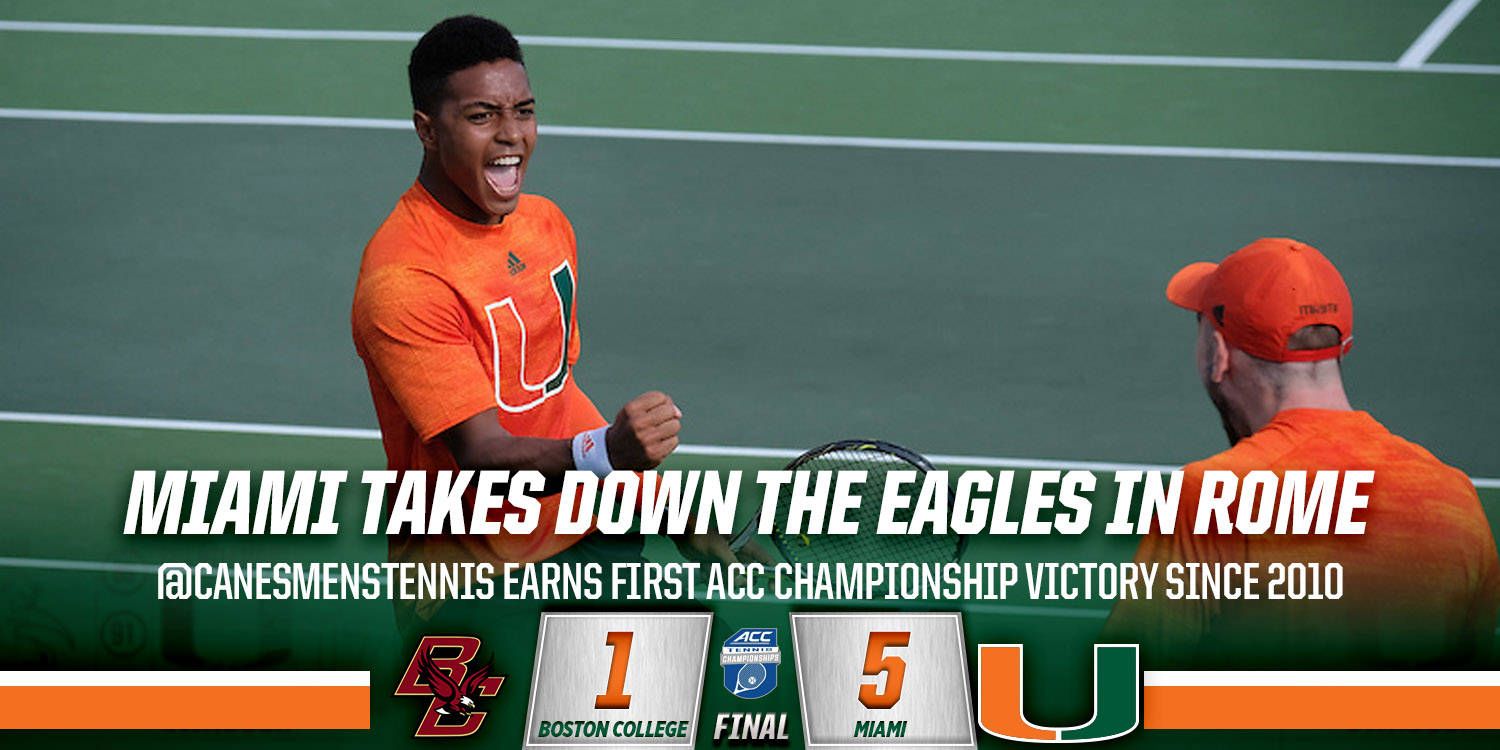 “It’s always good to get a win. I am glad we played today; it gave us an opportunity to work through some things under tournament conditions,” head coach Aljosa Piric said. “It’s tournament time, survive and advance, and that’s what we did today. We will have to play better, and compete better, against Duke tomorrow. We need all six guys to show up ready to battle. If we do that, we will have an opportunity to win.”

Miami (9-12, 2-9 ACC) opened the match strong with a pair of victories to take the one-point advantage and gain momentum entering singles play.

At No. 2, juniors Nile Clark and Piotr Lomacki got the day started with a doubles victory over the Eagles’ (5-18, 0-12 ACC) Conor Mullins and Derek Austin, 6-2.

On court three, Boston College’s Kent Mukai and Hank Workman took down junior Christian Langmo and sophomore Dane Dunlap, 6-4, turning all eyes to the tiebreaker taking place on court one.

No. 55 seniors Max Andrews and Jesse Flores clinched the doubles point for the Hurricanes as the duo won the tiebreaker, 7-6, over Adrian McNulty and Jeffrey Melvin.

On court two, Boston College cut the Canes lead in half, as Austin defeated Langmo, 6-2, 7-6.

Moments later, Dunlap gave Miami match point as he closed out his match against Conor Mullins, 7-5, 7-6.

Looking to clinch the match the Hurricanes earned victories almost simultaneously on courts one and four.

On court four, Flores found himself in a hole early against Mukai. After dropping the opening set tiebreaker, 6-7, the native of Ontario, Canada, battled back to take the match, 6-7, 6-3, 6-1.

Following the clinching of the match, No. 64 Lomacki was at match point and was granted the opportunity to close out his match.

Miami will return to the Rome Tennis Center at Berry College, Thursday at 1 p.m., in a matchup against No. 34 Duke, seeded fifth.