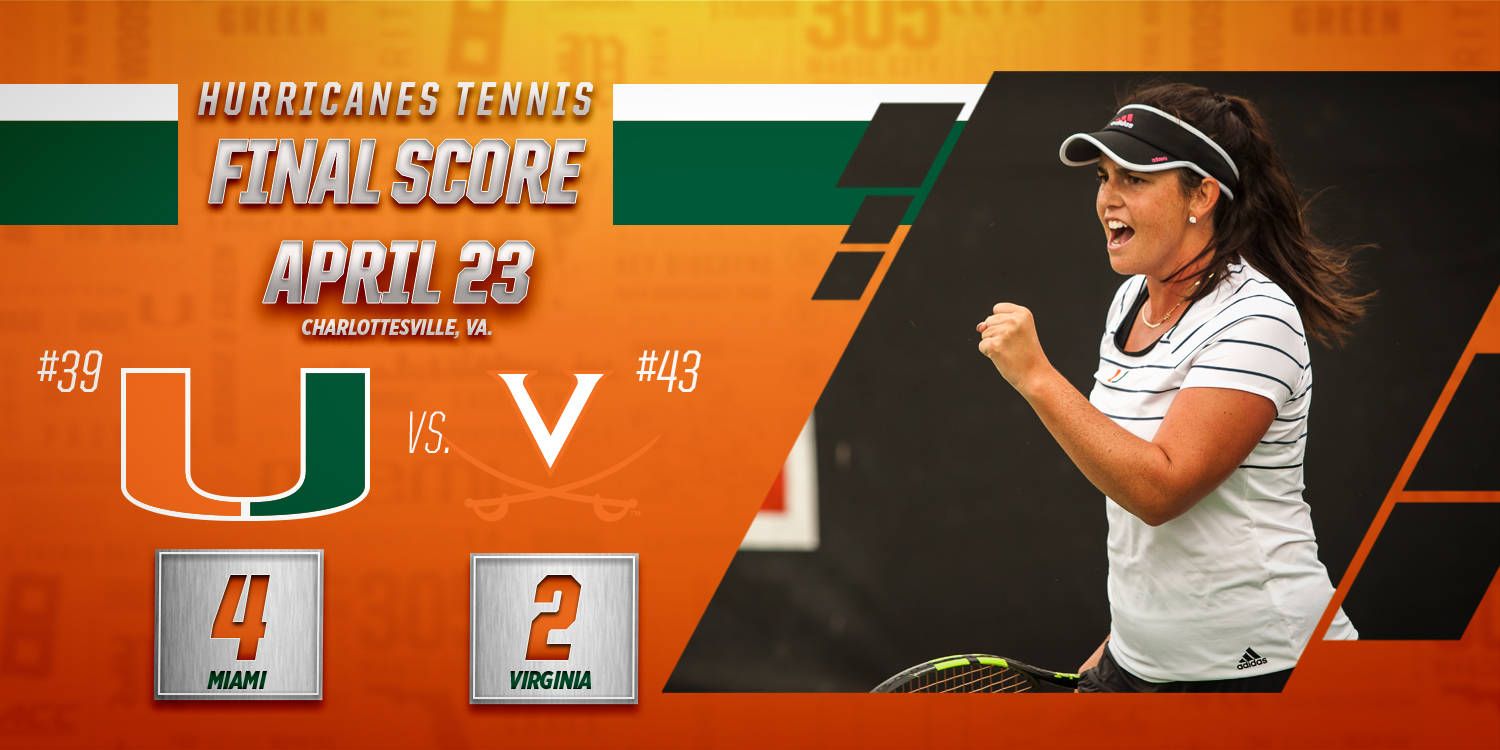 CHARLOTTESVILLE, Va. – Needing a win Sunday at No. 43 Virginia to clinch NCAA Championship eligibility, the University of Miami women’s tennis team dropped the first two points of the day.

From there, No. 43 Miami took complete control, winning four matches in a row to earn a thrilling, 4-2 comeback victory at the Boar’s Head Sports Club.

The triumph also clinched the Hurricanes’ 13th consecutive top-four finish in the ACC—every year since joining the conference—and a double-bye in the upcoming ACC Championship.

“We knew that today was a day where we had to bring it in. They knew the importance of the day,” Miami head coach Paige Yaroshuk-Tews said. “They played alert and, with the exception of No. 3, we didn’t let a match get away from us in singles. The girls obviously had a different level of alertness and they got the job done. I’m happy for them.”

The Hurricanes struck first in doubles, as freshman Sara Culbertson and junior Silvia Fuentes took the final six games of the match to defeat Camille Favero and Teodora Radosavljevic, 6-1.

Virginia (10-12, 7-7 ACC) countered with a 6-1 victory by Rosie Johanson and Meghan Kelley over sophomore Ana Madcur and freshman Estela Perez-Somarriba.

No. 33 Chloe Gullickson and Cassie Mercer clinched the doubles point for the Cavaliers by downing junior Sinead Lohan and freshman Dominika Paterova, 6-4, winning a third deciding point to seal the match.

Singles action opened with Virginia doubling its lead behind a 6-0, 6-2 victory from Kelley over Paterova. However, Miami (11-10, 8-6 ACC) won the first set in each of the other five matches.

No. 17 Lohan earned her second ranked win of the weekend by defeating No. 118 Mercer, 6-4, 6-1, to give the Hurricanes their first point of the day.

For Lohan, the singles victory was the 100th of her career, making her the ninth Hurricane to reach triple digits. It also served as her 50th dual match singles win in three seasons at Miami.

Shortly thereafter, No. 38 Perez-Somarriba defeated No. 49 Johanson, 7-5, 6-2, to even the score. For the Madrid native, who dropped the first four games of the match, the victory was her second of the weekend against a top-85 opponent.

“At the top, I just think Estela did a great job of making some changes deep in the first set,” Yaroshuk-Tews said. “Johanson is a great player. She is crafty and she can make you feel uncomfortable. Estela was able to turn the match around. She has shown when she’s down, she’s not out.”

Redshirt senior Maci Epstein, facing the team she spent the first four years of her college career playing for, gave Miami its first lead of the day by taking down Favero, 6-4, 6-4.

“Maci, I was very happy with the way she competed,” Yaroshuk-Tews said. “The way she played is exactly the way we discussed.”

It was Madcur who ultimately sealed the deal for the Hurricanes, earning a hard-fought victory over Radosavljevic, 7-5, 7-5.

For Miami, the win was its seventh in the past eight matches, including the fourth straight in ACC play, after opening the year at 4-9 (3-5 ACC).

“We were getting a little negative and we were letting losses affect us. Emotionally, I think we were able to put that behind us and focus on the present,” Yaroshuk-Tews said. “. . . I think everybody got tired of just moping and the girls decided it was time to play already. Needless to say, we’re glad that it happened. We were waiting for the team to come together. I still think we can play better. We’re getting there, but we still have a ways to go.”

Miami’s victory over the Cavaliers finished off an incredible stretch to cap the regular season and clinch at least a .500 record through the conference tournament, which is necessary to be eligible for the NCAA Championship.

Up next for the Hurricanes is the ACC Championship in Rome, Ga., where they will be the No. 4 seed and open play Friday.