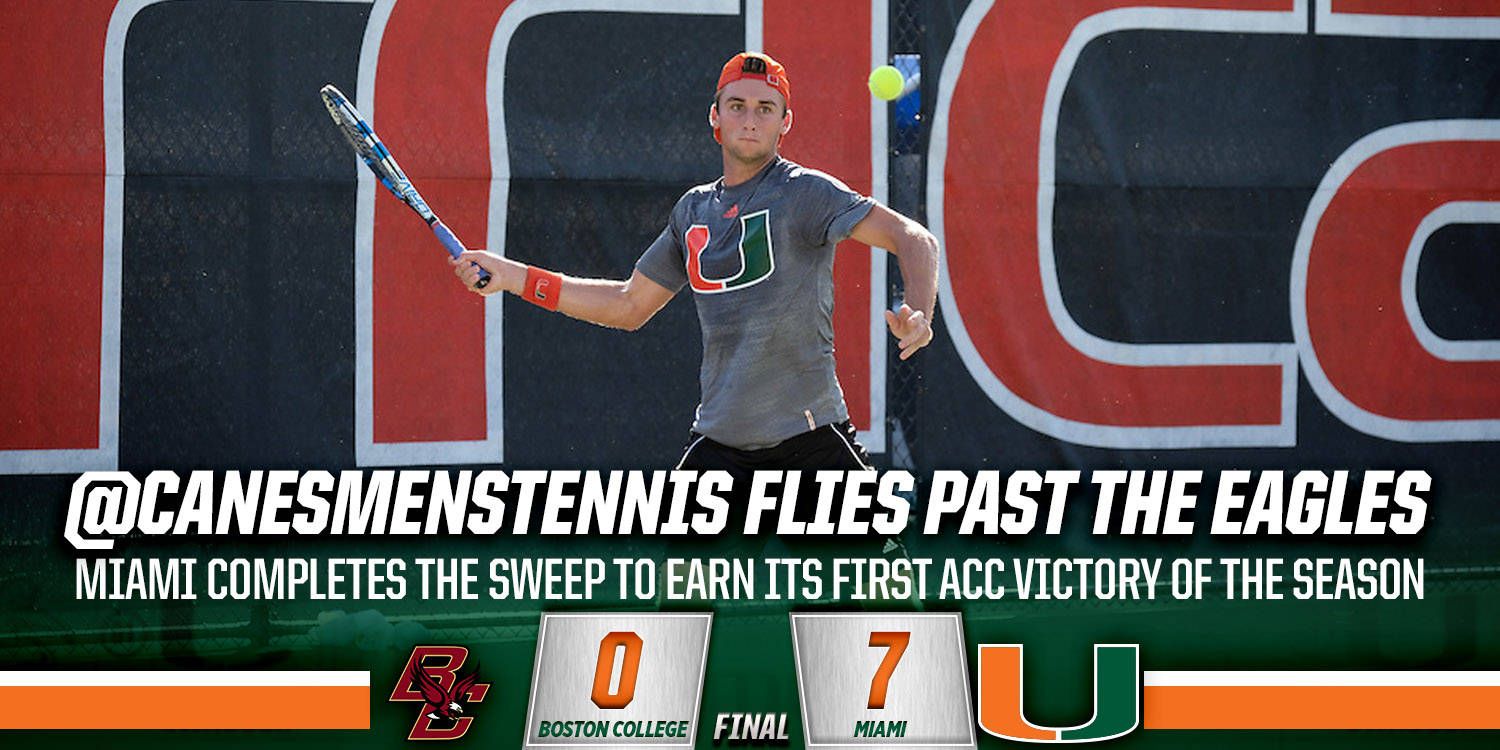 “It’s always nice to get a win,” head coach Aljosa Piric said. “It gives us a little bit of momentum going into Sunday. We had a couple of tough matches leading up to this match, so it is good to come out and get seven points against Boston College.”

The Hurricanes (7-9, 1-6 ACC) opened the match strong with a pair of victories to take the one-point advantage and gain momentum into singles play.

At No. 3, junior Christian Langmo and sophomore Dane Dunlap got the day started with a doubles victory over the Eagles (4-12, 0-7 ACC) Adrian McNulty and Kent Mukai, 6-3.

At No. 1, No. 56 seniors Max Andrews and Jesse Flores entered their matchup against Derek Austin and Hank Workman, coming off of a victory against the nation’s top-ranked doubles tandem. The duo dropped the opening three games, before rallying back to take the match, 6-3.

At No. 6, Dunlap increased the Canes’ advantage to two points, when the sophomore earned a straight-set victory against Jeffrey Melvin, 6-0, 6-1.

No. 51 Lomacki clinched the match for the Hurricanes, after he took the final three games in order to defeat McNulty for the second consecutive season, 6-1, 7-5.

Play continued following the clinching as Miami earned its fifth point of the match when Flores earned a victory over Mukai, 6-1, 2-6, 6-2

Looking to complete its third shutout of the season, UM turned to court five where Clark was in a battle against Chieffalo. After dropping the opening set, 4-6, the junior forced a third set after he took the second set, 6-2. Falling behind 4-7 in the third set tiebreaker, the native of Philadelphia, won seven of the final nine games to defeat Chieffalo, 4-6, 6-2, 1-0 (11-9).

The Canes will return to the Neil Schiff tennis Center Sunday at noon, when they take on the University of Notre Dame.

“We just have to take a day off and recover tomorrow,” Piric said, “We will have a quick practice, some of the guys have to come in and take care of their bodies. We have to bounce back and be ready to compete on Sunday against a good Notre Dame team.”