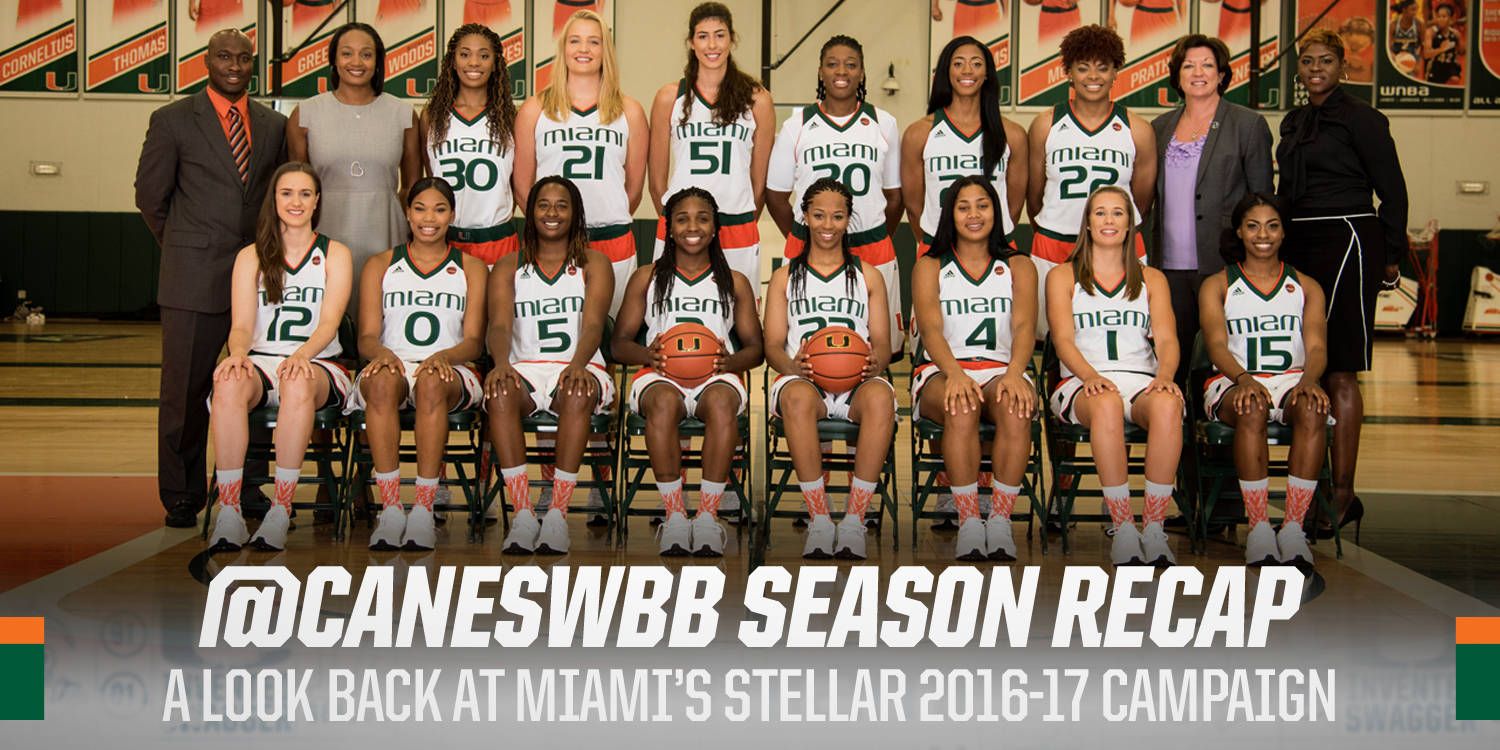 CORAL GABLES, Fla. – For the second season in a row, the University of Miami women’s basketball team won 24 games, made the NCAA Tournament and reached the semifinals of the ACC Tournament.

The Hurricanes’ 2016-17 campaign was an excellent one, as 12th-year head coach Katie Meier has made the norm in Coral Gables. In fact, it will go down as one of the finest seasons in program history, with the team tying for its fifth-most wins ever.

Miami was ranked in the top 22 of both major polls for the entire season, including in the top 18 of each for the final 16 weeks prior to the NCAA Tournament, peaking at No. 11 nationally.

Miami earned a pair of wins over top-10 opponents during the season, both away from home. It first defeated No. 9/10 Ohio State, 94-89, in overtime in Columbus, Ohio for a third straight ACC/Big Ten victory. The Hurricanes then topped No. 8/12 Florida State, 56-54, in Conway, S.C., marking the second straight year Miami knocked off a top-10-ranked Seminoles team in the ACC Tournament quarterfinals.

Through conference tournament play, Meier’s team was one of just seven teams with multiple top-10 victories away from home and one of just 13 with an AP top-10 road win.

Miami reached the postseason for the eighth consecutive season, further extending the longest streak in program history. The Hurricanes also won 20-plus games for the seventh time in those eight years after doing so once in the prior 16.

In addition, Miami reached the NCAA Tournament for the sixth time in the past seven years after making the field three times in the previous 17.

With a 62-60 victory over FGCU in the first round, the Hurricanes notched their fourth NCAA Tournament triumph in the past seven years after having two total wins prior to that.

Miami’s bench was stellar throughout the season, outscoring that of its opponent in 26 of 33 outings, including 17 times by double digits and by at least 28 points four times.

For the first time since 2013, two Hurricanes earned All-ACC accolades. Senior guard Adrienne Motley and Jessica Thomas, the team’s co-captains, were named Second Team All-ACC by both the Blue Ribbon Panel and the ACC Coaches. Motley became the third Miami player with at least three all-conference accolades, regardless of league affiliation.

In addition, for the first time, three Hurricanes were named to the All-ACC Academic Team, as Thomas, sophomore guard Laura Cornelius and sophomore forward/center Emese Hof all earned the distinction. Thomas and Hof became the third and fourth players in program history to be repeat honorees.

Miami players also reeled in numerous accolades from a variety of outlets throughout the season.

Hayes was named to the NCAA.com Starting Five after recording a double-double in the Hurricanes’ victory at Ohio State. She was also selected as a Second Team ACC All-Tournament member after averaging 15.0 points per game on 20-of-30 (66.7 percent) shooting over three games.

Along with Hayes’ weekly honor from NCAA.com, Thomas also garnered one from HERO Sports, as she was voted the Hero of the Week following her impressive showing in the NCAA Tournament.

Junior forward Khaila Prather was recognized for her efforts in the community, as she was one of 64 Division I players—seven from the ACC—selected as an Allstate Good Works Team nominee.

Cornelius connected on six 3-pointers in a game twice, giving her three of the 18 such occurrences in program history. She shot 6-of-6 from 3-point range in the victory at Pittsburgh, her second time making six 3-pointers without a miss, something no other Miami player has ever done even once.

Miami set a program record for conference play by scoring 100 points in a win over North Carolina. Florida State was the only other team to reach the century mark in ACC play during the 2016-17 campaign.

A Miami player logged five steals on five occasions during the year, with Davenport doing so three times and junior forward Keyanna Harris reaching the number twice. Both did so in a triumph versus Boston College during which Miami had a co-season-high 19 steals and forced a season-best 34 turnovers.

The Hurricanes had seven double-doubles on the season, as Hayes recorded five to give her 14 in her career, and Davenport notched two. Hayes had the first double-double in the NCAA Tournament by a Miami player since 2013 when she logged 16 points and 10 rebounds in the win over FGCU.

Hayes also finished the season shooting 135-of-250, good for a 54.0 percent clip that ranks fifth on Miami’s single-season leaderboard, giving her two of the top 10 marks.

Hayes, Thomas and Motley became just the second teammate trio in program history to have 1,000 points at the same time, joining Kym Hope, Jennifer Jordan and Cassaundra Wimes in 1998-99.

The Miami senior class of Hayes, Thomas, Motley and guard Nigia Greene was one of the very best to ever don the orange and green at Miami. In the two seasons (2015-16 and 2016-17) during which all four played, the Hurricanes went 48-18, good for the fifth-most wins and seventh-best winning percentage in a two-year span in program history.

Additionally, both the single-game overall attendance and student attendance records were broken in the Hurricanes’ first year playing at the newly-named and recently-renovated Watsco Center.

In 2017-18, Miami will return six players who have started multiple games as Hurricanes. Meier, who eclipsed 300 wins in her 16-year coaching career this season, is also set to welcome a top-20 recruiting class that features a quintet of nationally-ranked, four-star prospects.