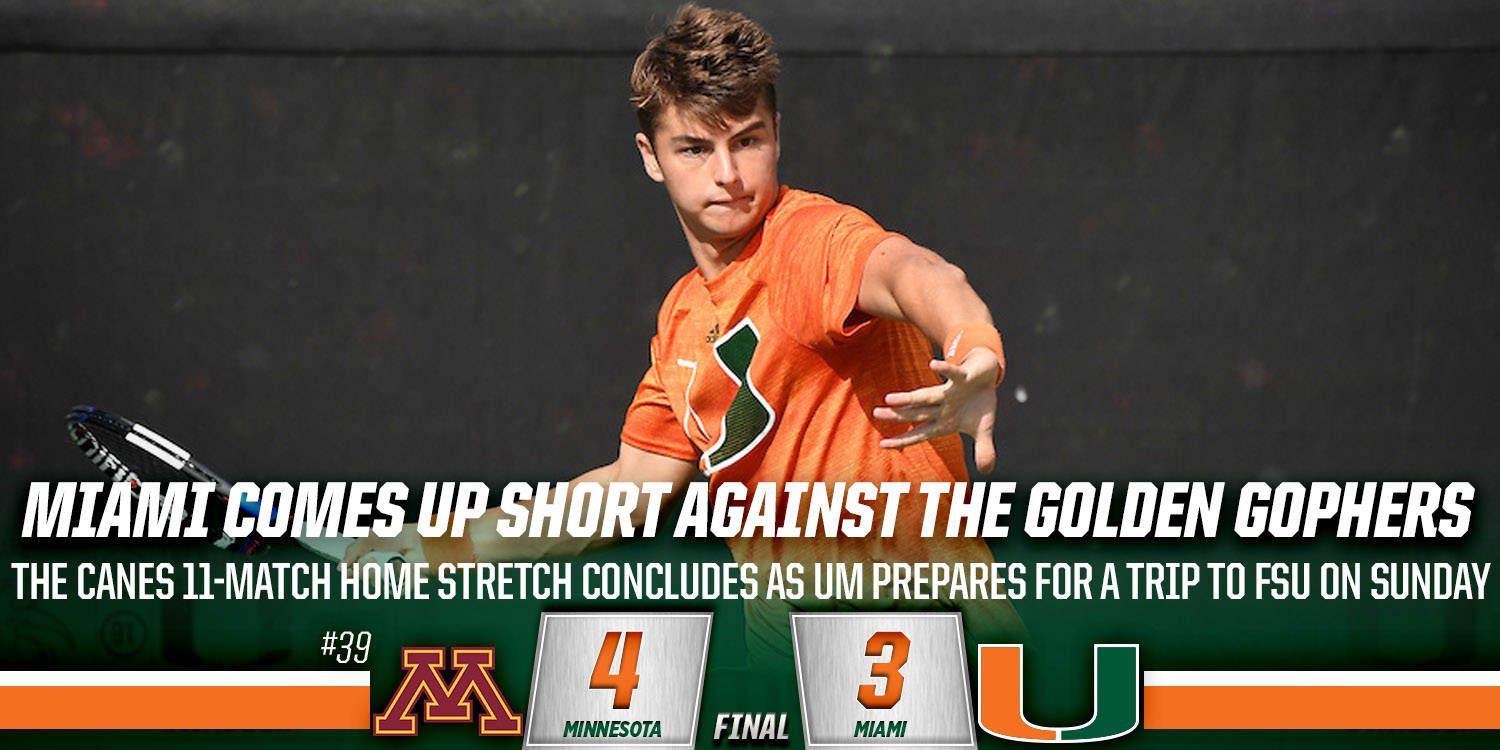 CORAL GABLES, Fla. – The University of Miami men’s tennis team dropped its final home match of March against No. 39 University of Minnesota, 4-3, Friday at the Neil Schiff Tennis Center.

“It was a great college match, congrats to Minnesota. Overall, disappointing loss, but they’re a good team,” head coach Aljosa Piric said. “We started off well in doubles play. We earned the doubles point and then we were in four out of six matches.”

Miami (6-5, 0-2 ACC) jumped out to the early lead taking the doubles point after winning on courts one and two.

At No. 2, the junior duo of Piotr Lomacki and Nile Clark improved to a perfect 7-0 as a tandem this spring, after they closed out their match, 6-4, against Justyn Levin and Eli Ogilvy.

At No. 1, seniors Max Andrews and Jesse Flores pulled out the deciding match for the Hurricanes against the No. 39 duo of Matic Spec and Felix Corwin, 6-4.

In single matches, Miami lost its first two early as Minnesota jumped out in front, 2-1, in the overall match as Langmo was not able to come back from a tough first set against Corwin, 3-6, 2-6. The second loss for the Hurricanes brought a similar result as junior Kevin Bondar could not rally back from a difficult first set loss to Josip Krstanovic, 2-6, 2-6.

“I think against a good team like this you need to be in six out of six matches and that’s the difference in the end. The matches that did go deep, our guys hung in there, they kept coming back, they kept fighting and once again, it boiled down to a couple of pressure points to win those,” Piric said. “You just have to believe in yourself. We are going to keep plugging, keep working and we’ll come back strong.”

After dropping the first two matches, the Canes continued to battle as each of the final four singles matches went to a third set decision, with two consisting of a third set tiebreaker.

At No. 6, Miami evened the match at 2-2 when Dunlap took down Levin. After splitting the first two sets, Dunlap trailed in the final set 4-5. The sophomore closed out the match winning three consecutive games to take the match, 6-3, 4-6, 7-5.

The fourth match to finish went down to the wire as court one played host to two competitors ranked in the ITA singles rankings. No. 68 Spec opened the match strong taking the opening set, 6-3, but No. 67 Lomacki took the second set, 6-4.

In a back and forth final set, Lomacki evened the match at six-points apiece forcing the tiebreaker. The native of Poland found himself in a hole early, trailing 0-5 in the tiebreaker, but he rallied seven straight points to win the overall match, 3-6, 6-4, 7-6 (7-5).

Leading 3-2 in the overall match, Miami looked to courts three and four for the deciding point.

The sixth and final match yielded a big crowd as Andrews looked for a comeback as he was down 2-5 in the third set against Milicevic. Winning the next three games to even the match at 5-5, Andrews comeback fell short as Milicevic was able to take the final two games and the match, 4-6, 6-4, 7-5.

Up next, the Canes will hit the road for the first time this spring when they take on No. 28 Florida State University Sunday at noon.

“We are in the toughest conference in the country so every ACC match is going to be tough but in all honesty we just played Georgia Tech last weekend and Minnesota is a team that is just as good as the remaining teams we will play this season. We just have to be wiling and ready for a fight,” Piric said. “We have to expect that these matches are going to come down to the wire like this, and we have to be able to step up under pressure and trust our preparation.”