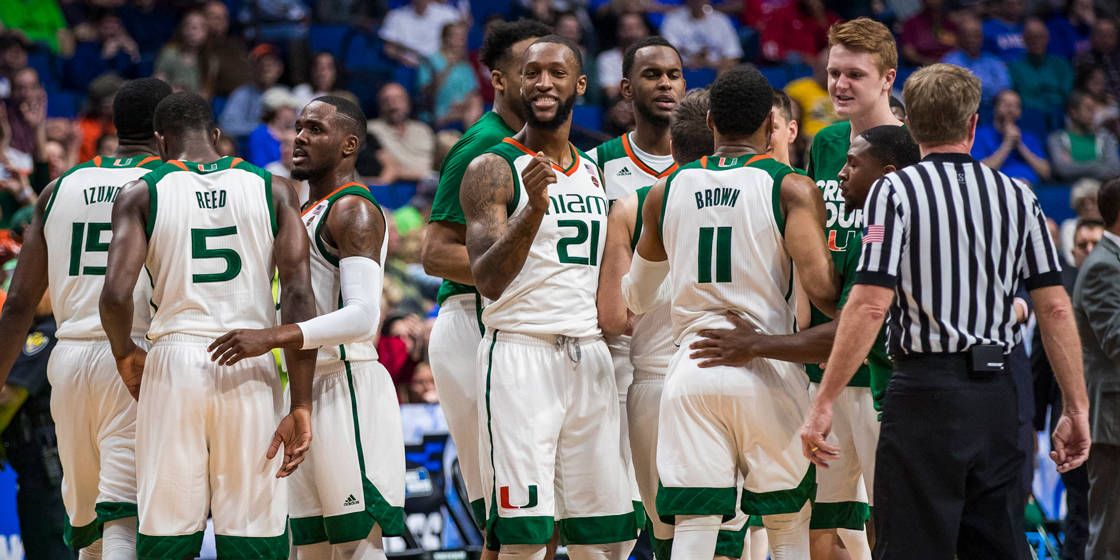 TULSA, Okla. – After waiting nearly all of Friday to take the court, the Miami Hurricanes came out firing in their first-round NCAA Tournament matchup with Michigan State.

The Hurricanes scored the game’s first 10 points, crashing the boards, forcing turnovers and scoring in transition. Miami couldn’t have asked for a better start.

By the time the final buzzer sounded at BOK Center, ninth-seeded Michigan State had defeated the eight-seeded Hurricanes 78-58 to advance to play top-seeded Kansas in Sunday’s second round.

It was the final game in orange and green for Reed and senior forward Kamari Murphy, whose leadership throughout the season helped Miami win 21 games and secure this tournament bid.

“I thought Michigan State really controlled the backboards and executed very well,” head coach Jim Larrañaga said. “It’s disappointing to lose, certainly, but it’s more disappointing that we didn’t play the kind of defense that we’d been playing for most of the season.

“But I’m very, very proud of my guys — it’s a very young team that made it to the big dance.”

Both the Hurricanes and Spartans got significant minutes from freshmen all season long but it was Michigan State’s freshmen trio of Miles Bridges, Nick Ward and Joshua Langford that led MSU’s massive comeback. The three combined to score 50 points, hitting 21 of their 31 shots and helping the Spartans shoot 57 percent from the field overall.

Michigan State posted a decisive edge in the paint and on the glass. The Spartans scored 40 points inside, had a 17-6 edge in second-chance points and outrebounded Miami 36-23.

The Hurricanes jumped out to that 10-point lead in the first three-plus minutes of the game. Reed hit a three after a Newton steal to give Miami a 5-0 lead. Brown converted another steal into a layup and the Hurricanes were up by a touchdown. Brown then banked in a trey before Bridges finally put the Spartans on the board with a three from the corner.

Newton responded with a spin and score — drawing a foul in the process — and giving the Hurricanes a 13-3 lead. DJ Vasiljevic fed Brown for a fastbreak dunk, causing Izzo to call timeout with the Spartans down 17-5 at the 13:12 mark of the first half. Brown fed Izundu for a monster, one-handed dunk to push the lead back to 19-8. Miami had forced six turnovers in the first eight minutes and held MSU to 33 percent shooting. The Hurricanes, meanwhile, hit eight of their first 14 shots and scored 10 points off those turnovers.

After the Spartans scored five straight points, Newton hit a jumper to give Miami a 21-13 lead. But Michigan State then went on a 20-2 run over the ensuing six-plus minutes. In the process, the Spartans started asserting their presence inside, connecting on nine of their final 13 shots of the half to build a 38-27 lead heading into the locker room.

“Once the momentum shifted from our side – I thought we played very well the first 10 minutes — to their side, they totally controlled the last 10 minutes of the half and then were able to keep that control throughout the second half,” Larrañaga said.

The Spartans then started the second half on a 13-5 run, giving them even more breathing room. Miami never got closer than the 11-point halftime deficit as MSU hit 64 percent of its shots in the second half.

Miami falls to 8-9 all-time in NCAA Tournament play, 4-3 under Larrañaga. The Hurricanes are 2-2 against Big Ten teams in the NCAAs.

Senior guard Davon Reed finished the game with 12 points and two steals. He scored in double digits 27 times this season, including 24 of the last 28 games. Reed had hit at least one shot from long range in every game but vs. Duke, with multiple threes in 22 contests, led by seven at NC State and five at Duke and FAU. He had multiple threes in 18 of the last 24 games.

Freshman guard Bruce Brown finished the game with 11 points, four assists and two steals. He scored double digits in 11 of the last 17 outings, including his 30 points against UNC, 25 against Duke and 21 against UNC in the ACC Tournament. He had at least two assists in 23 contests.

Freshman forward Dewan Huell finished the game with eight points, his most since scoring 13 against Georgia Tech on Feb. 18.

Miami falls to 8-9 in the NCAA Tournament, 5-4 in the first round and 4-3 under head coach Jim Larrañaga.

The Canes dropped to 2-8 on the year when heading into the locker room trailing.

Well, I thought Michigan State really controlled the backboards and executed very well. Miles Bridges and Nick Ward basically made every shot almost that they took. One of them was eight for nine, the other was eight for 12. We just couldn’t stop them, and I thought their guard play was very good at finding open men and carving up our defense.

Disappointing to lose, certainly, but even more disappointing that we didn’t play the kind of defense that we’ve been playing for most of the season. But very, very proud of my guys, very young team that made it to the big dance, and proud of these guys, Ja’Quan Newton and Davon Reed. I think they stepped up and gave a great effort tonight.

COACH L: Well, two things I thought happened. Number one, I thought their defense really picked up and they started to beat us to some of those 50/50 balls. And then second, I think I made a critical decision, we went from the zone to man to man, feeling like at some point we’re going to have to play it man to man, and I wanted to see how we would do. And once we did, Nick Ward came back into the game and really got it going. And then once the momentum shifted from our side, I mean I thought we played very well the first ten minutes — to their side, and they basically totally controlled the last ten minutes of the half and then were able to keep that control throughout the second half.

Q. Coach, can you talk about what you talked about with the guys in the locker room at halftime and just what you were trying to say to kind of get this thing turned in the other direction?

COACH L: Well, we explained to our guys that we basically led for the first ten, 12 minutes of the game and then they went on a run and took control and they led at halftime and that we needed to come out of the locker room and try to gain control again, basically play like we did to start the game. We went back to the two-three zone, ran some things offensively that we thought worked early in the game, but we never could stop them, even on the first possession where we stopped them on the first shot but they got the offensive rebound, stuck it right back in.

Well, the game started out in an incredible manner for us. I don’t sleep any nights worried about Nick getting in foul trouble just because of our lack of depth at that position. And he set not only a North American record but a Michigan State record. He got one, set two seconds. It had to be less than that. So I hope he wants to get in the record books for more than fastest foul.

But we were really shaky early. We turned the ball over a lot early. We responded like a bunch of freshmen, to be honest with you. We weren’t as sharp as we needed to be.

Give Miami credit. They took it to us. And after that first seven or eight minutes, I thought we played some of the best basketball we’ve played not only this year but in a couple of years. We moved the ball. We guarded. We took a couple of things away that are strengths.

Our whole mantra was to keep them away from the paint and keep them out of there. I’m telling you Miami is hard to keep out of there. We shot pretty well against a very good defensive team, and I’m proud of these guys. I looked out there one time there were four freshmen, and I think four freshmen and Kenny Goins, and I just said, wow, you know, we’re throwing a lot at them. But we threw a lot at them all year and I think they reaped some of those benefits tonight.

Q. Tom, I just want to ask you, you had to have gotten some leadership from somebody when you were under the ropes a little bit. Did you see anyone grow in that area?
COACH IZZO: I saw a lot of guys grow. I was too mad at Nick for him to lead there for a minute, but you know what he didn’t pout. He didn’t sit back. He kind of owned it a little bit, and those are all big steps, but Miles — Tum Tum still does it. Miles did it a little bit. I saw a little more out of McQuaid, and Langford had some energy tonight.