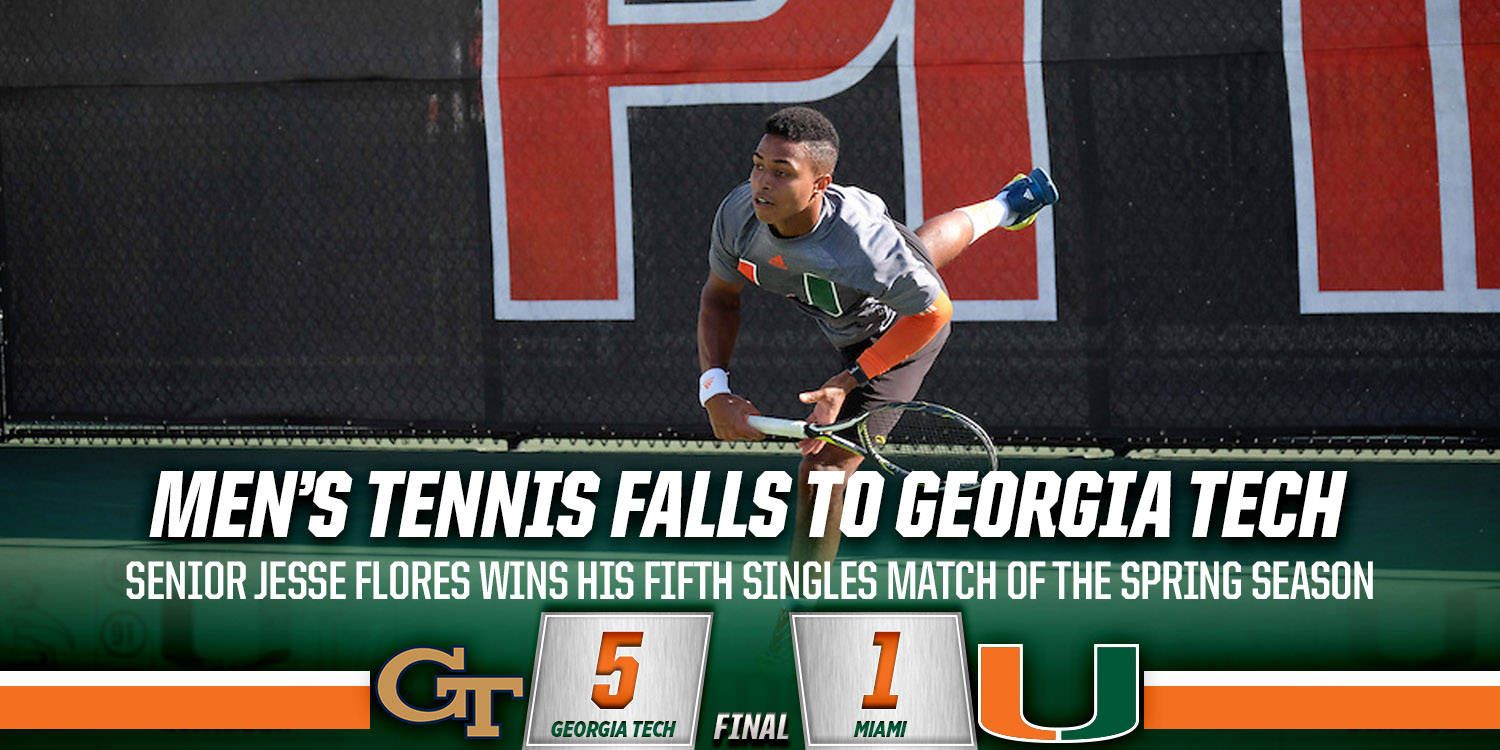 Canes Fall to the Yellow Jackets, 5-1

Due to inclement weather forecasted on the local radar, both coaches agreed to begin the match with singles play.

“It was a tough battle. That is a good Georgia Tech team, and we have to give them a lot of credit. They are a tough team,” head coach Aljosa Piric said. “We started with singles due to a chance of rain. Our guys accepted that challenge, and we went out there and really gave them a good run for a bit.”

No. 17 Georgia Tech (10-2, 3-0 ACC) took the early advantage, winning its first three matches on courts three, five and six. It was a tough outing for junior Nile Clark as he dropped his match against Cole Fiegel, 3-6, 1-6.

At No. 6 came the second of five tough losses for the Hurricanes. Junior Kevin Bondar kept the match close in the opening set against Daniel Yun but ultimately dropped the match, 5-7, 2-6.

At No. 3, senior Max Andrews traded blows with Carlos Benito. The first set ended in a tiebreaker, which the native of Manchester, England dropped, 6-7 (5-7). The second set showed an even score line throughout, but Benito took the set and the match from Andrews, 7-6 (7-5) 7-5.

Following the loss, the Yellow Jackets held match point as all three remaining matches were even after two completed sets.

Court one hosted a battle between two competitors ranked in the ITA singles rankings, with No. 67 Piotr Lomacki going up against seventh-ranked Christopher Eubanks.

After taking the first set, 6-3, Lomacki dropped the second set in a tiebreaker. After being down 2-6 in the tiebreak, a fierce comeback from the Hurricane brought it to a 6-6 tie. The resurgence was not enough as Eubanks took the final two games to force the third set.

“Overall, we fought hard. We had a few mental lapses at the beginning of the second sets on a couple of the courts, almost taking a little break mentally, which kind of cost us the match in the end,” Piric said. “As we have been saying to the guys all year, only a couple points can decide a tennis match and today that was certainly the case. Overall, this is a step in the right direction and we need to use this match to get better.”

Miami will return to Neil Schiff Tennis Center Friday, March 17 at 10 a.m., as the Canes conclude their 11-match home stretch against No. 32 Minnesota. UM will then hit the road for four consecutive matches, beginning with in-state conference rival No. 36 Florida State Sunday at 1 p.m.

“Minnesota is another good team that is highly ranked. It is going to be a battle,” Piric said. “From this point forward, every match we play is going to be a fight. We need to embrace that, and we need to be ready to compete. And we really need to work hard in practice, correct some of the things we need to correct and challenge ourselves to show up and be strong every match. If we continue to do that, we will get better and some of these are going to end up going our way.”