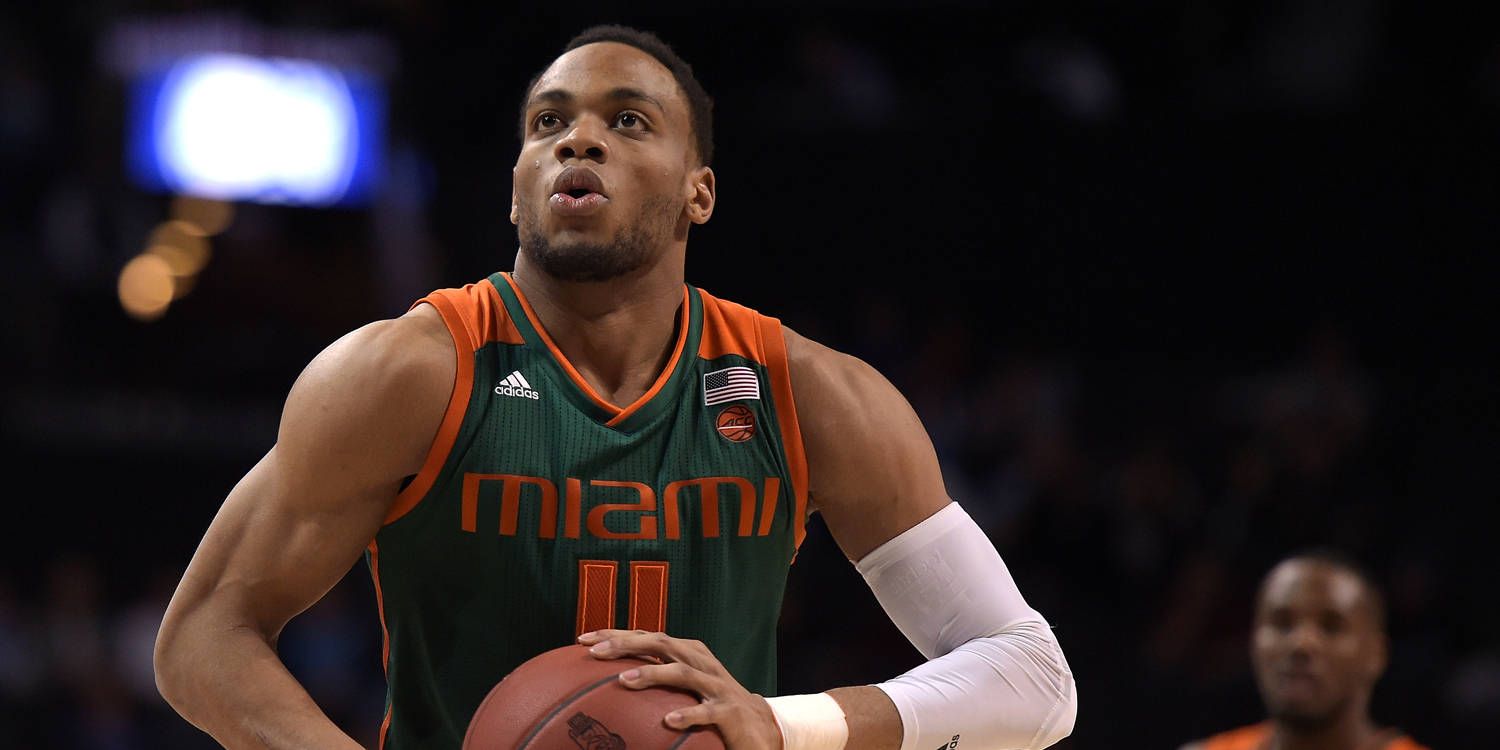 BROOKLYN, N.Y. – On paper, North Carolina seemingly had all the advantages entering its ACC Tournament quarterfinal matchup with Miami.

The Tar Heels were the top seed after winning 14 conference games. They had the ACC Player of the Year in forward Justin Jackson. And, perhaps more importantly, they had the advantage of rest, watching comfortably yesterday as Miami grinded out a tough win over Syracuse in the second round.

But the Hurricanes had North Carolina’s full attention – and for good reason. After all, on Jan. 28, the Tar Heels also arrived in Coral Gables as the ACC’s top team and Miami promptly ran them out of the gym, handing UNC what would be its worst loss of the season.

The Tar Heels returned the favor at Barclays Center Thursday afternoon, breaking open a close game early in the second half and eventually pulling away for a 78-53 win.

North Carolina improved to 27-6 and will play in the tournament semifinals tomorrow night against the winner of the Louisville-Duke game. The Hurricanes dropped to 21-11 and now turn their attention to Sunday night when the NCAA Tournament bracket is revealed.

“I thought Carolina was very sharp from the start,” head coach Jim Larrañaga said. “They made a lot of shots early, got some things going. I didn’t think we were sharp all day. Our defense did not put up much resistance, and our offense was out of sync from the very beginning.”

The Tar Heels leveraged their size inside, scoring 34 points in the paint and outrebounding Miami 36-29. The Hurricanes shot 36 percent for the game and hit just 5 of 21 three-point attempts.

Miami fought valiantly in the first half, ending the half on a 7-0 run to trim North Carolina’s lead to 34-29 at halftime.

But Berry and Jackson combined to score eight points in the first three minutes of the second half to push UNC’s lead back to 10. Brown hit a trey with 14:48 to cut the lead to 48-40 but North Carolina continued to pound it inside, answering with a 23-7 run that put the game out of reach.

Miami, which ranked second in the league in scoring defense during the regular season, was able to slow the game down in the first half. But the pace was more to North Carolina’s liking in the second half as the ACC’s scoring leader scored 44 points, including six three-pointers.
It was a somewhat sloppy first half that saw the teams combine for 17 turnovers and 18 fouls, and miss 11 of 14 shots from beyond the arc.

Reed drained a 3-pointer to give Miami an early 7-6 lead. Forward Kamari Murphy (five points, four rebounds) followed up his own miss to push the lead to three at the first media timeout. Reed then stole the ball and converted to Brown for a layup to make it 11-6.

North Carolina countered with a 15-3 spurt over the ensuing six minutes that Reed finally ended with two free throws. Murphy then fed Brown for a baseline dunk and Miami was back within three.

But the Tar Heels went on another run to grab a 32-20 lead, their largest of the first stanza. Reed hit a jumper with 1:40 left for Miami’s first field goal in more than six minutes and it gave the Hurricanes life.

DJ Vasiljevic converted a three-point play on the Hurricanes’ next possession to cut UNC’s lead down to single digits. Brown scored on a layup and the Tar Heels held for the last shot. Lawrence forced a turnover from UNC’s Seventh Woods and fed Brown for a breakaway dunk as the clock expired. Suddenly, North Carolina’s lead was down to five heading into the locker room.

Miami now has a 5-5 record against North Carolina since Larrañaga arrived in Coral Gables.

“I would look at Carolina and think they’re a real threat to win the National Championship, and yet we split with them,” Larrañaga said. “I mean, I know we played bad today, but we’re very capable of playing a whole lot better than we did. At the offensive end, we’re not quite as consistent as we are defensively, and if we share the ball well and get some assists and don’t turn it over very much, we’ll be a tough team to beat.”

With four steals this afternoon, sophomore guard Anthony Lawrence Jr. has swiped three-or-more steals for the seventh time this season. The four steals marks the third time in his career he has accomplished this feat, also doing so in back-to-back outings against Penn (Nov. 19, 2016) and Stanford (Nov. 24, 2016).

Miami fell to 7-21 all-time against North Carolina, and 1-2 when facing the Tar Heels in the ACC Tournament. Larrañaga is 5-5 at Miami against UNC.

“I thought Carolina was very sharp from the start. They made a lot of shots early, got some things going. I didn’t think we were sharp all day. Our defense did not put up much resistance, and our offense was out of sync from the very beginning. End result is a 24-point, or whatever it was, 25-point loss.”

Jim, it seemed like in the first game you guys did a really good job in the interior against them, did not happen that way today. What did they do differently, or what did you do differently?

“I think that’s the thing about North Carolina. They’re very predictable what they’re trying to do, and our players knew what they were trying to do. We just couldn’t stop it. Our attention to detail, our focus at the defensive end was impacted by how poorly we were playing offense. You miss shots. You turn it over. You give them some easy baskets. You get frustrated with your offense, then all of a sudden you’re thinking about your offense when you should be playing defense. There were just so many times they did exactly what we knew they were trying to do. They threw that lob pass a number of times. They didn’t get that once against us at our place. Our guys defended it exactly the way we planned to. And last night — and some of it may have to do with not having time to actually practice it on a court. We did it in a ballroom last night at the hotel at 9:00 at night. Not a lot of time to prepare. And even though you should remember what we did the first time, because you play so many games against so many different teams and they do so many different offensive plays, it’s challenging for a player. But without that game preparation, we just didn’t play well.”

Coach, in terms of Bruce being the offensive bright spot today, I’m curious, first of all, what you made of his overall performance here? But also the fact that his numbers have been disproportionately good against North Carolina and Duke this year. What do you think that says about his growth and development as a player?

“I think Bruce is a great competitor, and I think he loves a challenge. I think he should have been on the All-Rookie team. I can’t believe a player of his caliber who had the kind of year he had did not make the All-Rookie team. Just not right. But I thought he was pretty solid today, but you need a team effort. In Bruce’s case, I know he wants to win. It’s what the game is about. Win the game. And he’s going to do whatever is necessary to do his part.”

“We’re still playing. We like that. Second half, I thought we played well. First half, they outrebounded us by one. Second half, we outrebounded them by eight. One of the things we wanted to do was do a better job on the backboards, to say the least. First half, it was 8- 0, them on the offensive boards. Second half, the points was 8-4 for us. At their place, they outscored us 11-0 on fast break points, and I thought we ran the ball up and down the court better today. Bottom line is we shoot 53 percent, and they shoot 35%. They played yesterday and we didn’t have to play until today, and I think that helped us as well.”

Coach, Isaiah had a solid game, 9 of 9 at the free-throw line. What kind of boost does it give the team that he was able to get to the line and knock them down while he was there?

“If you go 9 for 9, that helps you with anything. I thought Isaiah was active. We needed to get the ball inside. We needed to do a better job in the paint. They beat us badly last time. It was embarrassing. I watched it yesterday. It was the worst two hours I’ve had recently. I think we were more motivated today after the way they manhandled us the last time. But Isaiah was huge for us, and I think that was really good.”