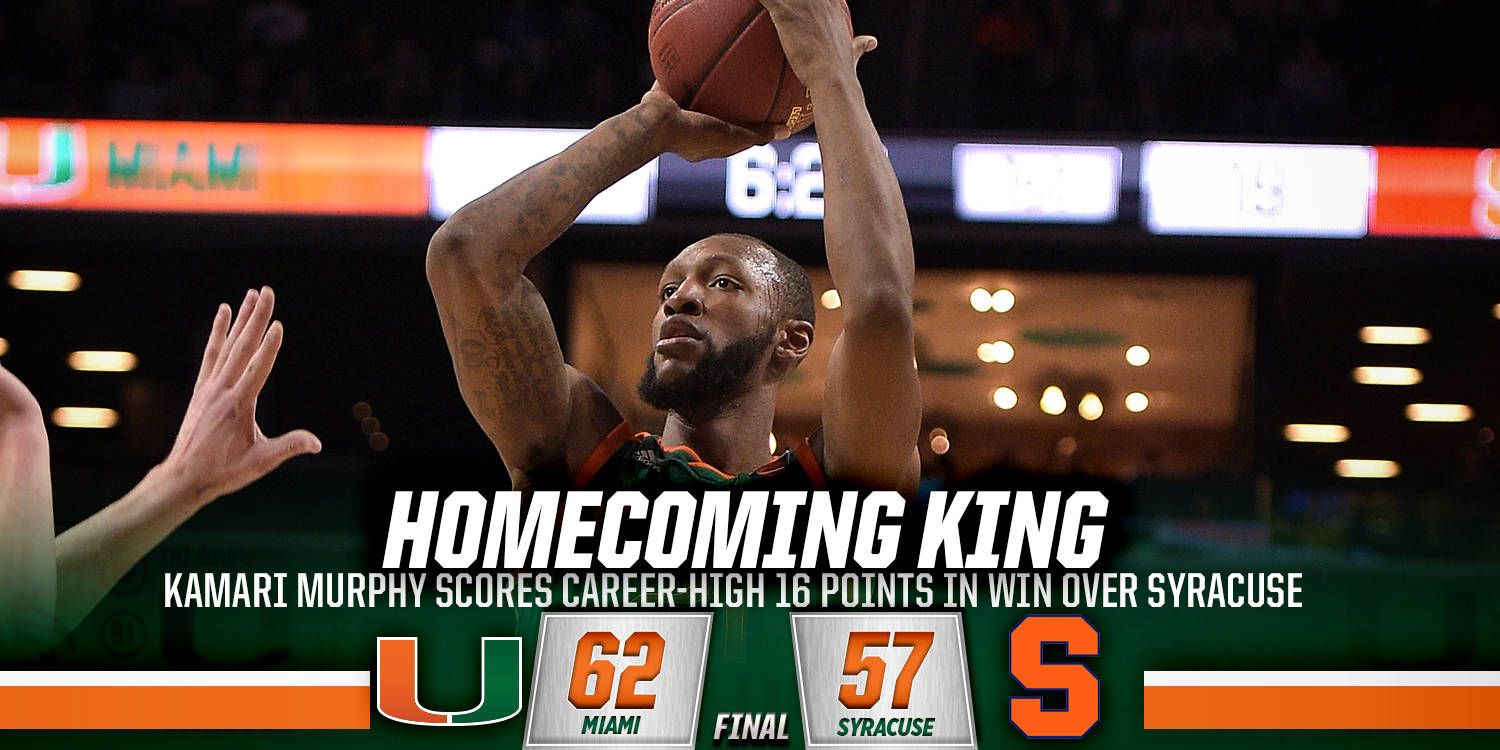 BROOKLYN, N.Y. – The opening game of Wednesday’s second round of the ACC Tournament was a physical slugfest in which neither team gave an inch on the Barclays Center court.

Just the kind of game in which Brooklyn native Kamari Murphy thrives.

Murphy scored a career-high 16 points in his homecoming, including two crucial dunks in the last four minutes, to lead the Miami Hurricanes to a 62-57 win over Syracuse Wednesday. Miami improved to 21-10 with the win and will face top-seeded North Carolina Thursday in the quarterfinals at noon. Syracuse dropped to 18-14.

“Coming into this game during practice and everything, we kind of said to ourselves, we’re starting a new season, 0-0,” Murphy said. “Everybody had a fresh head and a clear mind.

“Just today I came in playing my role — rebounding, staying around the rim, finishing when I can. Free throws, I know I’m capable of making, and I made all of them today. The guys did a great job of finding me, so I put it all together.”

Murphy also grabbed 10 rebounds to post his sixth double-double of the season, leading a balanced scoring effort with four Hurricanes in double figures. Guard Davon Reed, who was presented with the 2017 Skip Prosser Award prior to tipoff, scored 14 points. DJ Vasiljevic had 13 points – including three 3-pointers — while Ja’Quan Newton scored 11. Forward Andrew White led the Orange with 22 points, while guard Tyus Battle had 14 points.

“That was a great college game,” head coach Jim Larrañaga said. “We came into the game with a couple of thoughts in mind. Number one was they had outrebounded us 41-26 the first time we played them. We couldn’t afford to have that happen again. We needed to be the better rebounding team.

The game was a tale of two halves. The Hurricanes hit six three-pointers and shot a blistering 62 percent in the opening stanza to race to an eight-point lead at the break. The second half was a defensive struggle as the two teams combined to shoot just 32.5 percent from the field. But Miami made some key shots and some key stops down the stretch, holding on for a crucial and satisfying win.

Syracuse chipped away at Miami’s lead early in the second half. Battle hit his third trey of the game to give Syracuse a 41-40 lead with 12:13 left – the Orange’s first lead since it was 4-3. But Vasiljevic answered with a 3-pointer of his own to give Miami the lead back and then hit another one as the shot clock expired to make it 46-41.

“We’ve been in these types of pushes all season,” Reed said. “Early in the season, lack of experience led to us not being able to pull out some of those closer games. As the season progressed, we’ve been able to pull out some close games, and we showed that same type of resilience today. We had DJ hit a couple big ones, and we just stayed poised throughout the stretch.”

The Hurricanes eventually stretched the lead to seven, but the Orange again made a run as White hit a runner to cut Miami’s lead to 53-52. On the ensuing possession, forward Anthony Lawrence lobbed a perfect ball to Murphy, who slammed it home to push the lead back to three.

Battle then missed a dunk, leading to a Miami break where Newton fed Murphy for his own dunk at the other end to make it 57-52.

“Coach always says through practice don’t give up on the play,” Reed said. “We’ve got to just keep playing. So got to give credit to Coach L, and we just did that today, especially that play.”

Guard John Gillon hit a trey at the other end for Syracuse to cut Miami’s lead to 57-55 with 39.8 seconds left. Lawrence then fed Newton for a layup to make it 59-55. After Tyler Lydon answered with a dunk and Syracuse called timeout with 12.1 seconds left, the Orange fouled Reed with 7.7 left on the clock.

Both teams shot 43 percent from the field. Miami hit 9 of 23 from beyond the arc and outrebounded Syracuse 31-26, including a 9-4 edge on the offensive glass. The Hurricanes’ bench also outscored the Orange’s bench 13-2.

The Orange scored the first four points of the game but Miami responded with a 10-0 run. Lawrence hit a trey from the top of the key to get Miami on the board. Newton fed Murphy for a dunk to give Miami its first lead at 5-4. Reed then hit a 3-pointer and converted a steal into a layup to extend the run to 10.

Brown hit a three with the shot clock winding down and then Newton drove the lane for two to push the lead to 19-11. But Syracuse countered with an 8-0 run to tie the game with just under 10 minutes left in the half.

Miami responded with a 10-2 run to take a 29-21 lead. Vasiljevic hit a trey from the corner and a floater in the lane to push Miami’s lead to five. Murphy hit a turnaround jumper and Newton followed with a trey – his first since Miami’s loss at Louisville on February 11.

Miami’s starters against the Orange: Ja’Quan Newton, Bruce Brown, Davon Reed, Anthony Lawrence and Kamari Murphy. Miami is now 4-3 with those players in the starting lineup.

Redshirt senior forward Kamari Murphy recorded his sixth career double-double and fourth of the season. Returning to his hometown of Brooklyn, N.Y., Murphy finished the afternoon with a team-high 16 points and 10 rebounds. He has scored double digit points in six of the last nine games.

Miami opened the game shooting 61.9-percent (13-21) from the field in the opening half. This marks the fourth time Miami has shot at least 60-percent from the field this season, most recently shooting 9-of-15 (60.0%) in the second half against Georgia Tech on Feb. 15.

As a team, the Canes shot 6-of-11 (54.5%) from beyond the arc, as senior guard Davon Reed led the way with 10 first half points, to go along with three defensive rebounds.

With 14 points this afternoon, Davon Reed has scored in double digits a team-best 26 times this season, including 23 of the last 27 games. Reed has hit at least one shot from long range in every game but vs. Duke, with multiple threes in 21 contests, after knocking down three today.

Miami led Syracuse 36-28 at the half, which marked the 22nd time this season the Canes have held the halftime lead. Miami owns a 19-3 record when leading at the break.

The Hurricanes entered the ACC Tournament as the No. 9 seed for the fourth time, while facing off against the Orange for the first time. UM improved to 2-2 all-time as the nine seed.

Miami improves to 8-17 all-time against Syracuse, and 3-3 under head coach Jim Larrañaga.

“That was a great college game. We came into the game with a couple of thoughts in mind. Number one was they had outrebounded us 41- 26 the first time we played them. We couldn’t afford to have that happen again. We needed to be the better rebounding team.”

“I thought we made a couple of ill-advised fouls on a couple of shots they were about to attempt, and we fouled them, which gave them free throws, and they’re Number 1 in the ACC in free throws.”

“At the offensive end, I feel like we needed to make eight threes or more. We needed Davon, Anthony Lawrence, Bruce Brown, Ja’Quan Newton, and D.J. Vasiljevic each to hit a couple to get us in that ballpark. It’s hard for just one guy to do that. But when you play against that zone, the whole key was first to get the ball in the middle, and we had a very hard time doing that. So the guys did a great job of sharing on the perimeter, making some key threes, making some key stops, and rebounding the ball. We ended up winning the rebound battle 31-26. So great win for us.”

Coach, just curious, I know you took down the, quote-unquote, home team, but for you what was it like to have a more neutral site for the ACC men’s basketball tournament and for the future?

“First of all, I looked at it as Syracuse’s home game. They’re from New York. They played in the city a lot over the course of Coach Boeheim’s decades of excellence at Syracuse. But we’ve been on the road before.”

“The Barclays Center is a fantastic venue. New York City, the New York media, the television exposure in this area, being able to bring back a lot of our guys who are from the northeast — Davon from New Jersey, Kamari from right down the street, Rodney Miller, Bruce Brown from Boston, Ja’Quan Newton from Philly.”

“So we’ve got a lot of guys, and their families are able to drive to the game. It’s probably a little more expensive for them to stay overnight than it is in Greensboro, but it’s a great venue and very, very exciting for our league to be in New York, what I consider the mecca of college basketball.”

“I thought it was — you know, Miami’s a trick team. I thought the first half they shot the ball extremely well, but we hung in there and got, say, close. Second half, we were more aggressive. We got to the basket. We got them in foul situation early and got back in the game. Down the stretch, we missed two, and they made two, and that was the difference in the game.”

On only ten assists today, also ten turnovers. What was Miami doing defensively?

“They’re a very good defensive team. I think they’re one of the best defensive teams in the league. Ten turnovers is not out of hand. That’s not a bad number.”

“They’re just a really good defensive team, and they made it difficult. We finally got it going much better in the second half. Much better. And we had some good looks. Tyus got to the basket. That’s a big play. Missing the dunk was a huge play. They went down and got a dunk. You can’t have that happen in close games.”

“We got two really good looks from the three-point line and missed. They got two and made them. They were 0 for 8 from the three. And Vasiljevic was deep, really deep. We had taken a one-point lead. Shot clock was down. We were up pretty good on them. He was way back, and he made a big shot, and we came down and missed. That’s usually how these games are decided.”