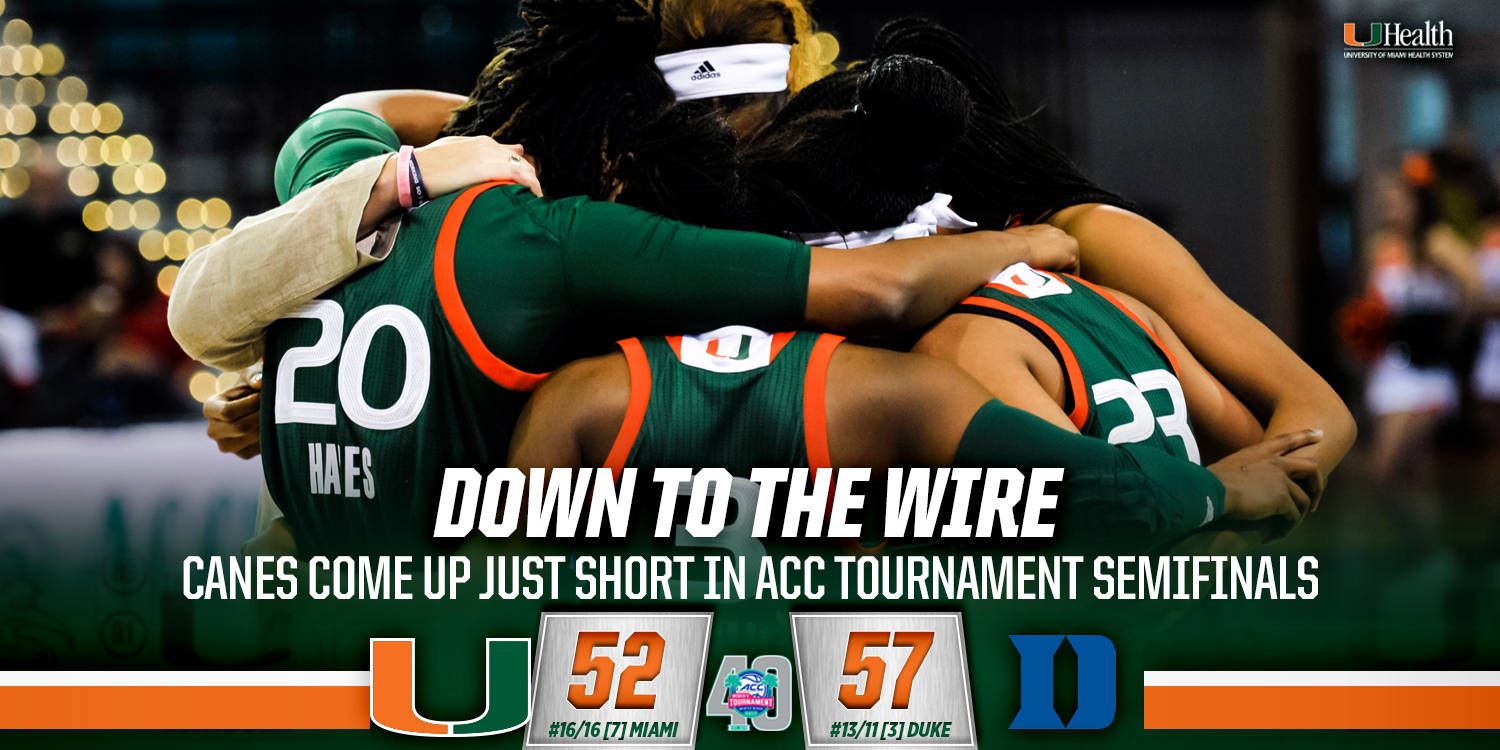 CONWAY, S.C. – The seventh-seeded University of Miami women’s basketball team led third-seeded Duke in the final two minutes of the ACC Tournament semifinals Saturday afternoon, but dropped a 57-52 decision at the HTC Center.

“I just thought that was an awesome basketball game. If you really are into strategy and personnel, and when you want to see young ladies have to be at such a high intellect and play their guts out [it was great],” Miami head coach Katie Meier said. “If you really study the game, there was so much going on. There were so many adjustments and it was so hard to get people open. To see these players just completely spill their guts out, on both teams, and yet be exhausted and so smart, so high-level [was impressive]. That is a credit to the entire season of work in the ACC and how difficult this conference is.”

Miami was held to its first-period season low in points and Duke was just one above its season low, as the Blue Devils led 10-9 through 10 minutes of action.

The Hurricanes used a 6-0 surge in the second quarter to go in front, 16-12, taking their first lead of the game with 7:09 left in the half. However, Duke would go on to take a 23-20 advantage heading into the locker room.

Duke’s 23 points tied for its third-fewest in a half this season, while Miami’s 20 were its second-fewest, including its least in the opening half.

The Blue Devils went on a 10-4 run in the third period to take a nine-point edge, 38-29, drawing a timeout by the Hurricanes with 4:44 left in the period. Coming out of the stoppage, the Hurricanes did not allow a point the rest of the frame, closing it on an 8-0 run to pull within one, 38-37, entering the final session.

Miami went back in front, 42-40, with 8:07 to go in the game after extending its run to 13-2. The Hurricanes held Duke without a field goal for six minutes and 47 seconds, including without a point for five minutes and 48 seconds.

After the Blue Devils charged ahead by five, 51-46, Miami went on a 6-0 run to take a 52-51 edge with 1:54 remaining. Duke then finished the game by scoring the final six points to earn the five-point victory and reach the ACC Tournament championship.

“We talked real quick—we’re very authentic and we’re very frank—and I said, ‘Right now, if I didn’t think we were a Sweet 16 team and beyond, I would tell you how much I love you, how great you are and ignore the mistakes, but that’s not us,’” Meier said. “If you want to be high-level, we’re going to hear it right now. There are couple things we did wrong in the last minute there [that I pointed out] and then I went and patted them on the back, but they want [that feedback]. As tired as they are, I’m so proud of our effort, I really am.”

Hayes, who paced all players with nine rebounds, was the lone Hurricane to finish with double figures, marking the first time since Feb. 25, 2016 against No. 10/10 Louisville Miami had just one double-digit scorer. Senior guards Adrienne Motley and Jessica Thomas each tallied nine points for the Hurricanes.

“You’ve got two teams that really want to score more than in the 50s,” Meier said, “but when it comes March, you make sure that you’re locking down on the defensive end . . . We don’t have a lot of regrets in this game. We really don’t.”

Miami shot 51.9 percent (14-of-27) from the floor in the second half after being held to 25.0 percent (8-of-32) in the first half, its second-lowest mark in a half this season, including the lowest in the first. The Hurricanes finished the game with a 30-18 edge in points in the paint.

The Hurricanes, set to make their sixth NCAA Tournament appearance in the last seven years, will find out their seed on Monday, March 13.

“I love my team,” Meier said. “We really had a great time in this tournament and I think that there is no question we played our best, best basketball in March, which is a coach’s dream. Hopefully, March has still got a lot of adventure ahead of us.”

·         Saturday’s game marked the first time in program history the Hurricanes played in the ACC Tournament semifinals in back-to-back seasons.

·         This is the third consecutive game against Duke, including the second time this season, during which Miami has held the Blue Devils without a point for a span of over five minutes and 45 seconds. Earlier this year it was six minutes and 13 seconds and last season it was 11 minutes and 37 seconds.

·         Hayes eclipsed both 1,100 points and 200 made free throws as a Hurricane and sophomore forward/center Emese Hof surpassed 200 rebounds at Miami.