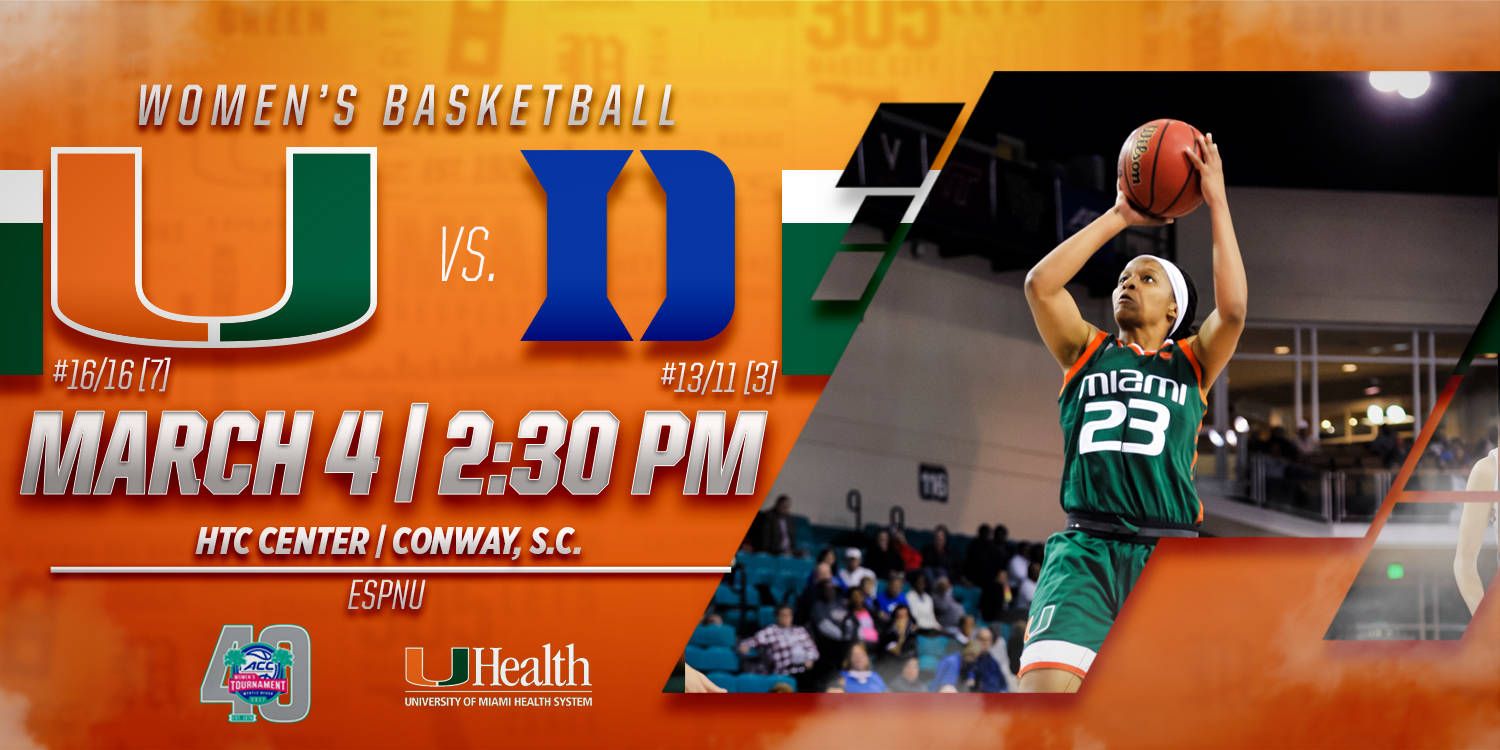 @CanesWBB to Play No. 13/11 Duke in ACC Semifinals

The Hurricanes, who have never faced the Blue Devils in the ACC Tournament before, trail the overall series, 13-2, but have won two of the past five meetings after dropping each of the first 10. Most recently, Duke tallied an 83-70 home triumph on Feb. 19, just under two weeks ago.

Miami 12th-year head coach Katie Meier is a member of the Duke Hall of Honor from her playing days in Durham, N.C. Duke’s inaugural ACC Legend and a part of the ACC’s 50th Anniversary Team, Meier was the 1986 ACC Rookie of the Year, a 1990 First Team All-ACC pick and was the first Blue Devil to register a triple-double.

Miami defeated second-seeded and No. 8/12-ranked Florida State, 56-54, Friday evening in the ACC Tournament quarterfinals. Redshirt senior forward Keyona Hayes and senior guard Adrienne Motley scored 12 points each for the Hurricanes, who held the Seminoles to their second-lowest point total of the season.

Redshirt junior Lexie Brown, a Blue Ribbon Panel First Team All-ACC honoree and the Kay Yow Scholar-Athlete of the Year, leads Duke in scoring at 18.3 points per game. Picked sixth in the ACC preseason poll, the Blue Devils went 20-12 (8-8) in 2015-16 and had their 21-year NCAA Tournament streak halted.

Saturday’s game is set to be broadcast live on ESPNU with Beth Mowins and Debbie Antonelli on the call, and is available on WatchESPN HERE. The action will also be carried live on WVUM 90.5 FM HERE.

Live stats for the game can be found HERE and more information is available on the ACC Tournament homepage HERE.

The winner of the contest between the Hurricanes and Blue Devils will take on either top-seeded and third-ranked Notre Dame or fifth-seeded and No. 14/13-ranked Louisville in the championship, which is set for Sunday at 1 p.m., on ESPN2.