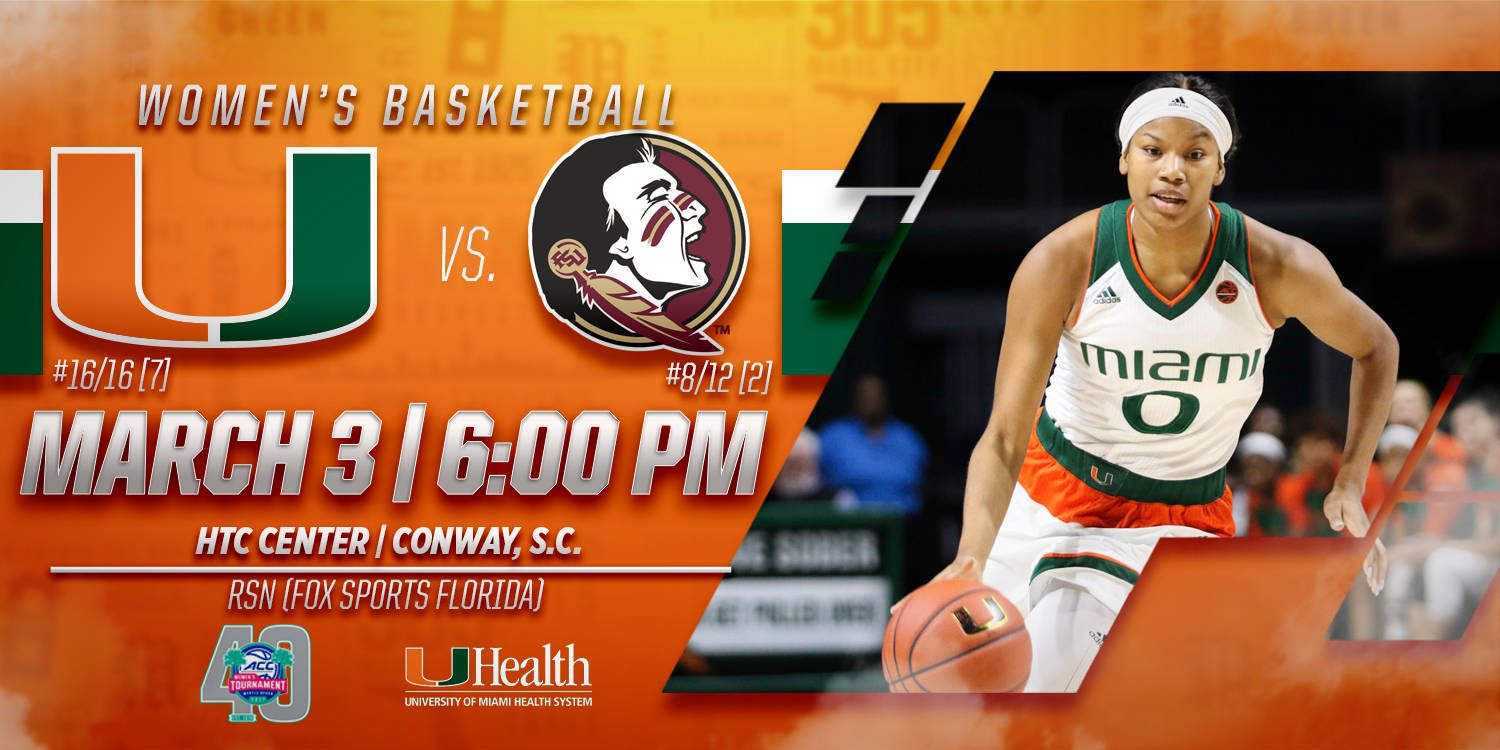 CONWAY, S.C. – For the second consecutive year, the University of Miami women’s basketball team will be squaring off against its in-state conference rival in the ACC Tournament quarterfinals.

No. 16/16 Miami (22-7, 10-6) is set to play No. 8/12 Florida State Friday at 6 p.m., at the HTC Center in Conway, S.C. The Hurricanes, making their third straight quarterfinal appearance, are seeded seventh, while the Seminoles are seeded second.

The Seminoles have a 41-13 advantage in the all-time series against Miami, including a 2-1 edge in ACC Tournament play. Last year, the then-No. 16/16 Hurricanes knocked off No. 14/10 Florida State in the quarterfinals. In the most recent matchup, earlier this season, the Seminoles picked up an 80-71 home victory on Feb. 6.

Miami is coming off an 87-71 win over No. 10-seed Georgia Tech Thursday in the second round of the ACC Tournament. Redshirt senior forward Keyona Hayes (16), senior guard Adrienne Motley (15) and sophomore forward/center Emese Hof (14) combined for 45 points, as the Hurricanes shot a season-best 63.8 percent (37-of-58) from the floor.

The Seminoles begin ACC Tournament play with a 25-5 (13-3 ACC) record, but have dropped three of their past five games after winning 23 of their first 25. Junior forward Shakayla Thomas, a Blue Ribbon Panel First Team All-ACC selection, paces Florida State in scoring at 15.1 points per game.

The contest between the Hurricanes and Seminoles is set to be broadcast live on RSN (affiliate list HERE under Game 10) with Tom Werme and Debbie Antonelli on the call. Chelsea Shine will be doing sideline reporting.

The action is also available on WatchESPN HERE and will be carried live on WVUM 90.5 FM HERE. Live stats for the game can be found HERE and more information is available on the ACC Tournament homepage HERE.