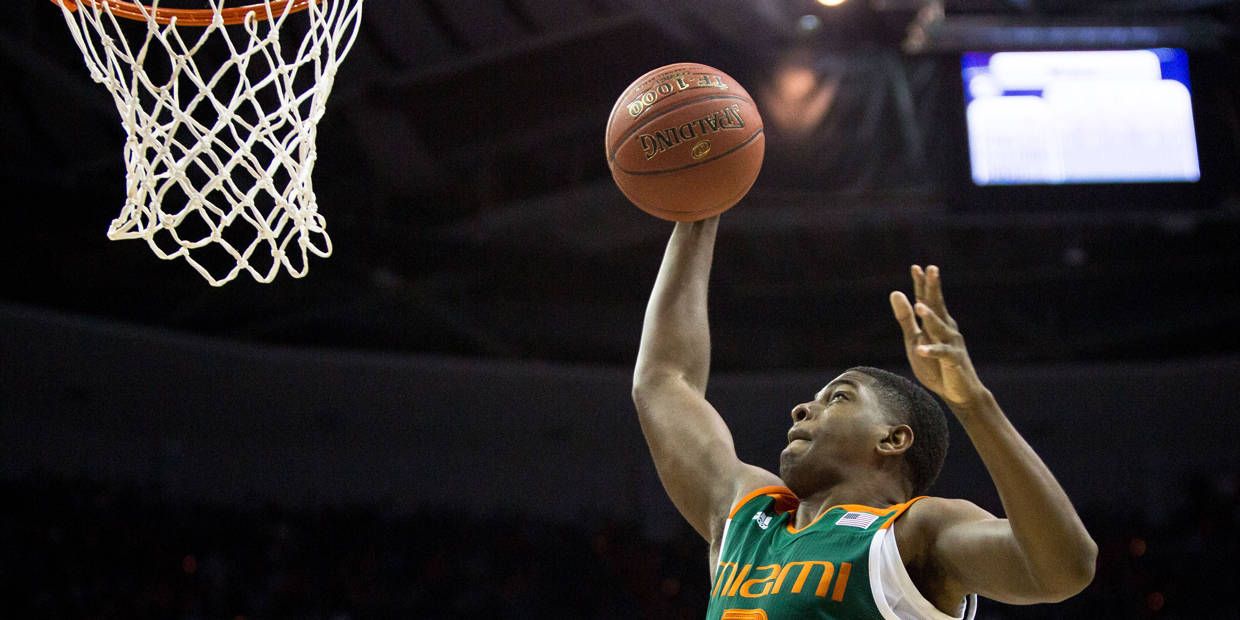 The Hokies started the game off with the hot hand, opening the night with a 10-1 run, as Ahmed Hill and Justin Bibbs knocked down a pair of threes during the stretch.

Sophomore guard Anthony Lawrence, Jr., rallied the Canes with a pair of threes and a layup, scoring eight of Miami’s first nine points, six minutes into the game.

Miami (20-9, 10-7 ACC) trailed, 13-9, when freshman guard DJ Vasiljevic found his range, knocking down a shot from beyond the arc to pull the Canes within one. Following a Zach LeDay free throw and 3-pointer by Ty Outlaw, the native of Australia once again responded with a three of his own.

The Hurricanes entered the locker room trailing the Hokies, 27-26, as Virginia Tech shot 6-of-12 from beyond the arc, while Miami shot 4-of-10.

Right out of the gate, freshman guard Bruce Brown knocked down a triple to give the Hurricanes their first lead of the game, 16 seconds into the second half, 29-27.

Following a 3-pointer by Outlaw to place the Hokies back in the lead, 32-29, senior guard Davon Reed received the pass from redshirt senior forward Kamari Murphy, knocking down a clutch shot from long range to even the score at 32 apiece.

On the following offensive possession, Reed made a drive through two Hokies on his way to an end one, which he converted for the three-point play and two-point lead

With the score even at 38 with 13:19 to play in regulation, Virginia Tech opened a 7-0 run, kicked off by an Outlaw 3-pointer. Lawrence once again put another stop to a Hokies run, knocking down a shot from beyond the arc as Miami trailed, 45-41, with 11:23 left to play.

Following three consecutive defensive stops, Miami capped off a 7-0 run of its own with a pair of converted free throws by Lawrence and a dunk by Murphy assisted by the sophomore, to even the score at 45.

Once again finding themselves in a hole, 48-46, the Hurricanes turned to Lawrence, who laid in his 17th points of the game, before Murphy hit a midrange jumper, as Miami pulled back ahead by two.

The Hurricanes will close out the regular season with a road trip to No. 15/17 Florida State Saturday, March 4 at 4 p.m.

Miami’s starters for the fifth straight game were Bruce Brown, Davon Reed, Anthony Lawrence, Kamari Murphy and Ebuka Izundu. Miami is now 4-1 with those players in the starting lineup.

Senior guard Davon Reed opened the game with six rebounds in the first half, after setting a new season-high in the previous home victory over Duke with 10 rebounds. Reed finished the game pulling down nine boards, as well as adding 11 points and two assists.

Sophomore guard Anthony Lawrence, Jr., finished the evening with his highest point total since scoring 19 at NC State, Feb 4, 2017. He tallied 18 points to go along with five rebounds and three made shots from beyond the arc.

Redshirt senior forward Kamari Murphy finished the night with 13 points, two rebounds, three assists and one block. He has a block in 11 of the last 16 games, while scoring double digits in five of the past eight games.

Off the bench, freshman guard DJ Vasiljevic converted on multiple shots from beyond the arc for the second time in the past three games. Vasiljevic finished with a layup late in the first half, knocking down his tenth shot from inside the arc this season. The freshman concluded the evening with nine points.

Miami forced 11 turnovers, the 21st game this season the Canes have forced the opponent to cough it up more than 10 times.

Miami is now 10-4 overall against Virginia Tech in Coach Larrañaga’s six seasons at Miami, including a 2-3 mark at Cassell Coliseum. In the all-time series, UM falls to 20-14 against the Hokies and 6-8 on the road.

“We gave up too many threes, too many free throws and those were the two points of emphasis that we wanted to take away. We didn’t want to put them on the foul line and we didn’t want to give them a chance to get double digits with made threes. Because the last time we played them, they only made four, tonight they made 10 and that is the difference in the game.”

“I think he made some outstanding shots, he has been on fire these last several games. I think Virginia Tech has really been shooting the three ball well at every position and Ty had eight of the ten they made. So he made 80-percent of the threes, one guy. We tried to put several different guys on him. But the only guy who had minor success was Davon Reed, which he didn’t shoot any against Davon.”