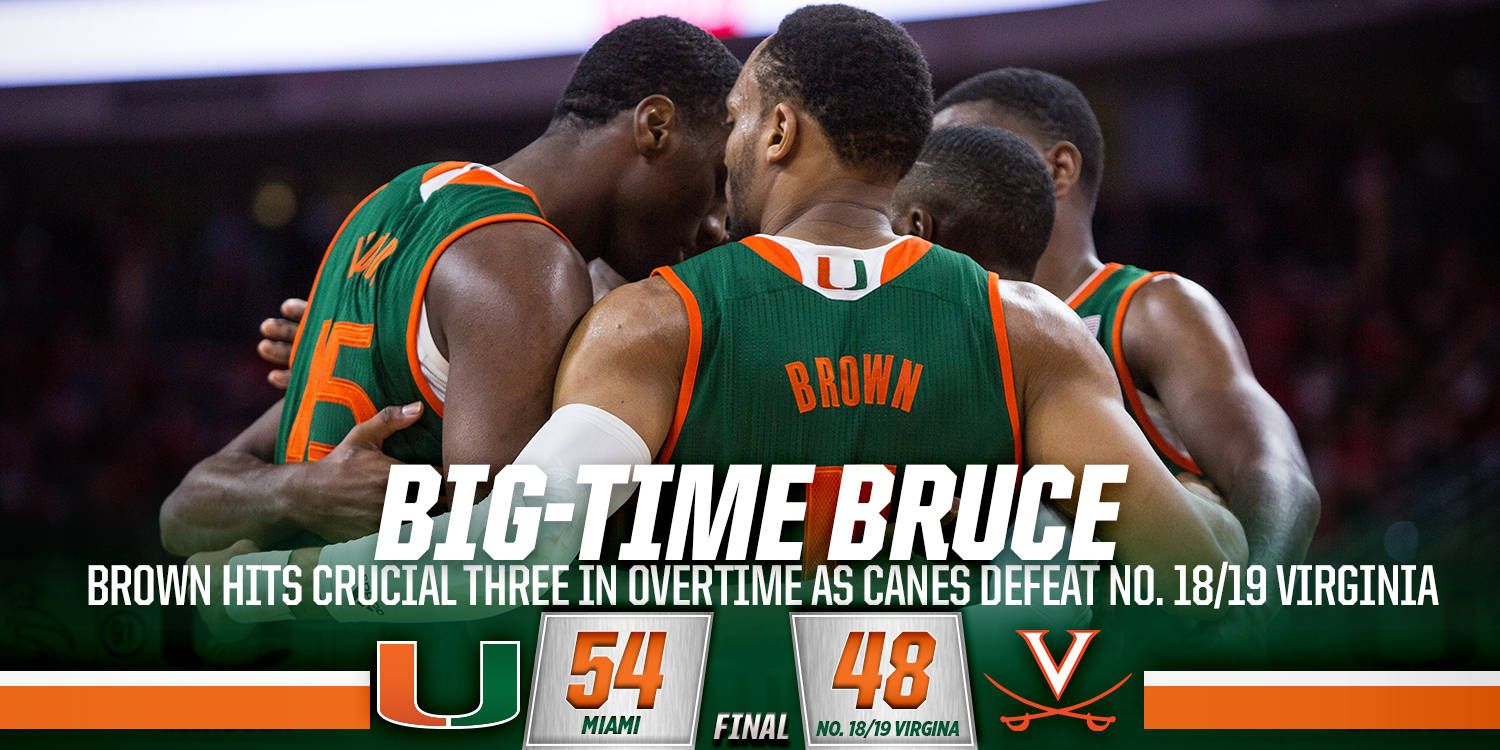 CHARLOTTESVILLE, Va. – Down by as many as nine midway through the second half, the University of Miami men’s basketball team looked to the charity stripe in order to fight its way back into the game against the University of Virginia Monday night.

Down 35-26, the Hurricanes only converted on four field goals in the final 16:48 of both regulation and overtime, while hitting 18-of-20 shots from the free throw line.

Miami (19-8, 9-6 ACC) played 45 minutes with a strong defensive effort, holding the Cavaliers to only 48 points, on a night the Hurricanes scored a season-low in points offensively.

The strong defensive effort began in the opening half, where Miami held Virginia (18-9, 8-7 ACC) to its fewest points this season, when heading into the locker room.

Following a pair of free throws by Isaiah Wilkins with 3:47 left to play in the opening half, UVA led the game, 19-14. UM would close out the half knocking down a pair of threes, its first two of the game, by senior guard Davon Reed and freshman guard DJ Vasiljevic to give the Canes the 20-19 halftime lead.

This marked only the sixth time all year Miami entered the break leading the game over a ranked opponent, with a record of 1-3 in its previous four outings.

Looking for their first win at John Paul Jones Arena under head coach Jim Larrañaga, the Hurricanes were leading, 26-23, with 14:57 left to play in regulation.

The host would then take its largest lead of the night (nine), as the Cavaliers went on a 12-0 run.

Up 43-41, a foul was called on Miami with four seconds remaining, placing Wilkins at the line where he evened the score at 43 apiece.

Reed took the ensuing inbounds pass the length of the court, where he heaved up a shot from beyond the arc. Despite knocking down the shot, a video review was used to determine he released the ball just after the buzzer.

Trailing, 48-47 with 23.8 seconds left in overtime, freshman guard Bruce Brown knocked down a crucial 3-pointer to give the Canes a lead it would not look back on.

Following four consecutive free throws, Miami outscored the Cavaliers 11-5 in the overtime period to seal its second victory of the season over a ranked opponent.

Up next for the Hurricanes, a return to the Watsco Center against Duke Saturday, Feb. 25 at 4 p.m.

Miami’s starters for the third-straight game were Bruce Brown, Davon Reed, Anthony Lawrence, Kamari Murphy and Ebuka Izundu. Miami is now 3-0 with those players in the starting lineup.

With the win Miami is now 12-9 all-time against Virginia and 3-5 under Coach L. The Canes are 4-6 at John Paul Jones Arena, while improving to 1-3 under Coach L on the road against the Cavaliers.

Miami’s 54 points was the fewest points scored by the Canes in a game this season. The previous low was 55 against Syracuse. The 54 points is also the fewest points UM has scored in a win, since defeating Cal State Fullerton, 48-46 on Nov. 29, 2013.

Under Coach L Miami improves to 7-7 in overtime games, and 4-3 in ACC play.

Virginia’s 19 first half points marked only the third time this season Miami allowed less than 20 points in a half. On Dec. 16, the Canes held South Carolina State to a season-low 14 first half points, while holding Western Carolina to 18 in the second half on Nov. 11.

Miami scored a season-low 20 first half points. The Canes previous low was 22 in the second half against Duke.

Virginia’s 43 points tied for the least amount of points Miami has allowed within regulation this season. Miami held Western Carolina to 43 in its first game of the season.

Murphy has pulled down double-digit boards in eight outings. He has a block in 10 of the last 15 games.

He has scored double-digit points in four of the last five games.

Sophomore Anthony Lawrence, Jr. who played point guard in high school, dished out five assists, tying his previous career high of five, which he recorded against Clemson this past Saturday. Lawrence also pulled six boards off the glass.

Freshman guard DJ Vasiljevic knocked down two shots from three, marking five straight games in which the freshman has hit from long distance. Vasiljevic pulled down a season-high four rebounds, while scoring in double digits (10) for the seventh time this season.

Junior guard Ja’Quan Newton was out for the game, while serving his three-game suspension for violating team rules. Newton will return to the court Feb 25 against Duke.

“While the game was going on and neither team could really score with any kind of consistency, I turned to my staff and told them this reminds me of a 2001 game against Wilmington in the CAA Championship where final score was 35-33. We won and moved onto the NCAA tournament. We played Maryland, a Final Four team and we scored 81. The way teams match up and the way you play offense and defense, it is very challenging against Virginia to get any kind of fast break baskets, you have to be good at the half court level. And quite frankly, their half-court defense is tremendous so we knew we weren’t going to score a lot of points. We felt like we’re pretty good defensively, we’re not ranked No. 1 in the country like they are, but we’ve been pretty darn good. We felt like this was going to be a low scoring game, and maybe the first team to 50 would win. So, as the game was going on, it was not a surprise at all to us to all and our players were very comfortable understanding that we’re not going to score 35 or 40 at the half, so that was kind of what we expected. And in the second half I thought it would pick up some, and it did for them until there was about seven minutes left and I think our defense tightened up. We played a little smaller group and that worked pretty effectively.”

On London Perrantes and defense…

“I think at this time of year you will probably see signs of fatigue in all players. The grind is very serious. We played Saturday, now it’s Monday, and we had a travel day on Sunday. You have to be very careful about your practice time and how well rested your players are. You’d have to ask Tony Bennett about London and if he is fatigued or not, but I know our guys are going to get Tuesday and Wednesday off because we haven’t had two days off since January. To start the game we went zone, then we switched to a match up, and then we switched to our man to man. Eventually we just played man to man and put Davon Reed on Perrantes.”

“We were very calm throughout the game when we fell behind. As a coach, you can often tell when you look at the players at a time out. If they are looking back at you and listening intently, it’s very good. There is a mental challenge at staying focused throughout a contest and I could tell at every timeout, and even in overtime, as soon as my staff and I sat down with my team, they listened intently and went out and did it. Now, sometimes it didn’t produce any of the points that we were looking for, but in the end the only thing that matters is the final score.”

On the team’s recent struggle with free throws…

“It’s cost us more than one game for sure, the ability to finish a free throw. Those were three front ends, I think, of the bonus. They obviously were 20 of 22. A few things showed up that cost us. Hands were low and they shot some threes, things that have cost us in the past. It was there for the taking, and we didn’t, and they did. They made some tough plays. It’s too bad, it was a special night, but it doesn’t take away from Malcolm [Brogdon’s] night, that was awesome. He’s one of the special ones. But it would’ve been nice to have a good feeling and to celebrate what was a wonderful career for him on a special night.

“For sure. We struggled to score. We’re not shooting well. London [Perrantes] obviously didn’t have a strong game. There are a lot of things we’re trying to overcome, and we need everyone playing at a fairly solid level for us to be able to be successful in this conference. There were better stretches of defense, harder offense, quality shots, and we got a few pocket passes with some dunks. Mamadi [Diakite] had a couple dunks that I thought he had and he slipped the pass off to Isaiah [Wilkins]. But Mamadi did a couple of good things for us. But it’s where we are. Our inexperience is showing and we are obviously sliding right now. We have to fight like crazy to play as hard as we can and see if we can get one.”

On if London is getting fatigued…

“Yeah, I thought we were a bit tighter tonight, but that’s just what it is. It’s our fourth game, we had to just fight, and the crowd was wonderful. Fatigue is going to be part of it at this time of year. You know, you’re so close and it messes a little bit with our guys’ minds. I thought we had it, and then we dropped those free throws and they make the big shot. London, he just didn’t play well. It was just one of those games. He wasn’t sharp for us. He is getting matched pretty hard, they’re guarding him, and he’s not getting a lot of clean looks. But you just keep plugging, that’s all you can do.”

On the team’s 12-0 run and their performance there…

“We were defending well and running our offense well. There was good movement. We don’t throw it in the post to score but that’s why I mentioned we got a couple off the curls where we dropped it down. Devon [Hall] hit a three. We just got good looks, good action and the ball was going in, combined with stingy defense, that’s our formula. Then there were a couple turnovers, a couple of plays on their part and a couple of turnovers. You add in the missed free throws, that hurt. I thought that was a big swing when we could have pushed it out to maybe ten points at that point.”